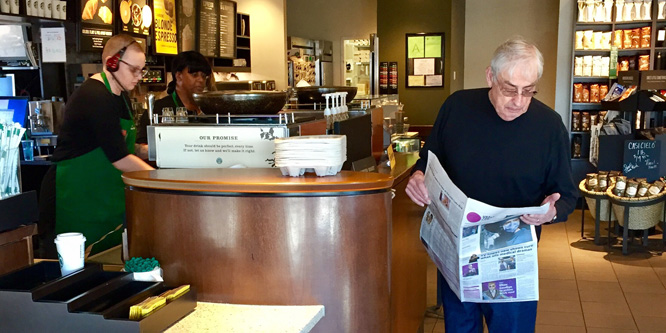 A joint study from the University of Texas and Boston College found that Starbucks’ stores experienced a 6.8 percent decline in traffic per month compared “to other nearby coffee shops and restaurants” since shifting from a customer-only to an open bathroom policy in May 2018.

The study was based on anonymized cellphone data obtained near 10,752 Starbucks stores from January 2017 to October 2018.

Other findings from the study:

Starbucks’ shift to an open bathroom policy followed an uproar after one of its managers in Philadelphia called the police in April 2018 when to two black men, who didn’t purchase any items, refused to leave the location. The two claimed they were waiting on an associate. In addition to the policy change, all U.S. Starbucks locations were closed on May 29, 2018 for sensitivity training.

Starbucks disputed the study’s findings, telling Yahoo Finance that customers are visiting “at record numbers.” In its recent fourth quarter, Starbucks reported that its U.S. comps grew six percent, with traffic growth across all day parts.

The researchers said Starbucks isn’t correctly assessing the impact because the chain isn’t taking into account traffic at nearby coffee shops. Researchers said the findings show the difficulties “attempting to provide public goods, as potential customers are crowded out by non-paying members of the public.”

Regardless, bathrooms appear to remain a headache for all QSRs. A Business Insider article last year indicated Starbucks was installing needle-disposal boxes in bathrooms in 25 U.S. markets to address workers’ safety.

Not many laws require businesses to provide bathrooms to customers. Stores not offering bathrooms avoid loitering or improper activity that may occur in them, tasking someone to clean them and the risk of earning a reputation for dirty facilities. For food establishments, many laws require businesses to provide restrooms for customers if they have a specific number of customer seats, for example, more than 19 in New York City.

DISCUSSION QUESTIONS: Is an open, customer-only or no-access bathroom policy the best option for stores and food establishments? Are chains missing a customer service opportunity by not offering restroom access?

Please practice The RetailWire Golden Rule when submitting your comments.
Braintrust
"Starbucks has always projected a certain level of social consciousness and responsibility and the bathroom policy is consistent with the ethos of the brand. "

"People go to the bathroom. An open policy is always best – no matter what this clickbait study says."

"The real answer to this question is to address the issue of homelessness in an effective manner at the community level."

11 Comments on "Should Starbucks stick with its open bathroom policy?"

I can’t speak to the bathroom issue, but I can’t have been the only person who boycotted Starbucks during Howard Schultz’s short-lived Presidential bid…

As much as I made my name battling Starbucks nearly 25 years ago, I have to agree with them. Spurious data and faulty conclusions. Independent coffee houses have a fraction of the traffic a Starbucks has. People go to the bathroom. An open policy is always best – no matter what this clickbait study says.

This study is interesting but, from what I have read here, it does not conclusively prove that the open bathroom policy is responsible for traffic declines. Sure, there may be a correlation but this does not definitively prove causation. Lots of things could be behind the decline such as competition from other chains, subtle changes in the economic circumstances of people in various locations, and so on.

I will take this study with a grain of salt. The study correlated dwell times with crime rates in the neighborhood and citations for public urination. But it does not include any survey data from actual customers. While the correlation is there, causation is merely assumed.

Whether lesser dwell times equates to lesser sales is not clear. Starbucks has always projected a certain level of social consciousness and responsibility and the bathroom policy is consistent with the ethos of the brand. They will benefit in the long run.

It’s scary how bad this research is. The sample is biased, the methodology is suspect and, worst of all, it doesn’t answer the real question, which is whether sales are weaker with the open policy. With over a year’s worth of data, you would expect Starbucks has figured out that the policy doesn’t hurt sales.

Like other BrainTrusters, I am not overly impressed by the study’s methodology and, by extension, its conclusions. “My” Starbucks is close to a homeless hub. When the weather turns cold or inclement the Starbucks fills with the homeless and the bathrooms become, in objective fact, trashed. More worrisome, many of the homeless folks camped out all day and night need showers and clean clothes, many are on medication and or substance abusers, and a minority are actively disruptive. None of this particularly bothers me, but there is no doubt that it negatively impact “dwell time” on the part of a fairly significant percentage of target customers. Perhaps even worse, this puts the staff in the crosshairs of a seemingly intractable problem. On the one hand, most associates sympathize with the homeless often reaching into their own pockets to get them a hot drink on a cold day and they are in any event bound by policy to treat even non-spending customers as though they were the most loyal of customers. On the other, they have… Read more »
2
|
0
-   Share

Look, Starbucks is all about running a business in a way that makes good business sense. It is nearly impossible to accuse them of not “thinking through” everything they do, and then taking action. Of course the “open” policy should stay in place. That is precisely what their customers should and do expect. We must remember that market forces will impact every business, and at times this creates misleading studies. Never have I seen a business that is constantly on calm water. It is the best businesses that learn and implement through the waves.

I am going to simplify this mainly so I understand it. First and foremost, I do not drink coffee nor do I frequent Starbucks; so I have no “skin in the game” or its outcome.

How does Starbucks, or any food establishment, know who a customer is if that person simply walks in and goes to the bathroom without asking permission? It is usually not a secret where the bathrooms are located, is it?

OK, enough of my sermonizing. I think food establishments should be open about allowing customers or walk-ins to use the bathrooms. They are supposedly serviced on an hourly basis if we are to believe the check off signs behind the doors. My sense of the question is it might depend on the location of the food establishment that determines who they allow to use the facilities.

The open restroom policy research is certainly indicative of a potential impact but as Neil stated, correlation is not causation. Note the work potential.

Not being a Starbuck’s customer I cannot offer direct observations, but can say that I know people who would definitely take their business elsewhere if they the location they frequented had some of the issues mentioned.

I will say, in the c-store industry the open restroom policies have led to “interesting” situations in certain locations. We found them being used for drug deals and other activities.

Question: how is “anonymized” data able to identify race? (Or to put it another way: maybe the data can be “re-individualized” if one really wants to.)

This is the classic “no win” situation: serving people who “should” be there while discouraging those who shouldn’t, and to further complicate it, perhaps offering a public service to the latter, as long as they cause no problems.

And the issue is by no means limited to restaurants: I was in the downtown L.A. ****** last year around Xmas and discovered the washroom access required a key. Yeah, sure, there was a procedure for doing so — find a sales associate…. Finding Blitzen would be easier! But it was inconvenient and thus annoying.

But what’s the standard for determining who is a “customer” in a department store? Only those who’ve already bought something? Only “Rewards Members”?

Braintrust
"Starbucks has always projected a certain level of social consciousness and responsibility and the bathroom policy is consistent with the ethos of the brand. "

"People go to the bathroom. An open policy is always best – no matter what this clickbait study says."

"The real answer to this question is to address the issue of homelessness in an effective manner at the community level."