Target crushes it with strongest holiday results in years 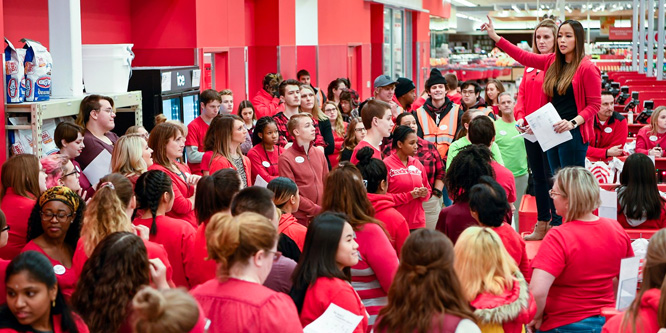 Target was expected to be one of the winners of the 2018 holiday season, and the retailer not only lived up to expectations, it surpassed them.

Target posted a 5.3 percent gain in same-store sales during the fourth quarter as physical locations saw sales increase 2.9 percent while online jumped 31 percent. The 5.3 percent comp for the quarter was the biggest gain for the chain going back to 2004. Target has now had online sales increase 25 percent or more for five straight years.

Brian Cornell, Target CEO, speaking on the retailer’s fourth quarter earnings call, reflected that the most recent results came from investments made in 2017, with stores at its core.

Increasingly, Mr. Cornell, consumers are also expecting Target to be the place where they can buy what they want, where and when they want it. “Target is, hands down, America’s easiest place to shop,” he said.

Over the last two years, Mr. Cornell said, Target has remodeled 400 stores “outfitting them with new technology, fixtures, design, totally transforming how they look, feel and function.” Plans call for 600 stores to be updated by the end of next year.

Target has also found success with its small store format, with locations now numbering almost 100 and plans to open “a couple of dozen” new locations in cities and college campuses each year. The chain’s store in New York’s Herald Square, Mr. Cornell said, produces more sales per square foot than any store in Target’s entire chain.

“Our teams are obsessed with finding new ways to make our guests’ lives just a little easier. When you look at the results and pick your metric — traffic, comps, net promoter scores, guest surveys — it’s clear our strategy is working.”

Target’s shares were up 4.58 percent on its earnings report.

DISCUSSION QUESTIONS: Where do you think Target has made its biggest gains in the past couple of years? Where does it still need work?

Please practice The RetailWire Golden Rule when submitting your comments.
Braintrust
"Target has returned to its cheap chic roots. People are responding."

"Target’s successes have been won by focusing on relationships with customers and establishing relevancy, especially for its core target segment of women."

"For all of the smart things Walmart is doing, they aren’t touching what Target has done with their redesigns."

Target’s success has been hard won and is, therefore, well deserved. A lot of things came together for Target over the holiday season. Refurbished stores attracted more shoppers, own-brand products performed well, and a strong omnichannel proposition drove online sales. As a result, Target gained share and emerged as a firm retail winner.

As we move into 2019, Target needs to focus more on grocery – an area which is far from optimal and where performance needs to be boosted. It also has the potential to expand own-brands into areas like lingerie and electronics – something it is starting to do.

I don’t think there are just one or two initiatives that explain Target’s success. I’ve been impressed by Target’s focus on executing the basics and in particular their commitment to investing in front-line staff to service shoppers. Mr. Cornell and his team appear to be striking the right balance of investing in innovation and executing the basics – their results speak for themselves. Target needs to remain focused on their current path – executing basics and continuing to search for innovative ways to serve their guests. It’s as simple and as complex as that.

Target has returned to its cheap chic roots. People are responding. I hear mixed reports on store cleanliness, but there is no denying that the consumer is trading down. When we look at Nordstrom’s full line store results vs. the Rack results, it becomes clear that consumers are in a bargain-hunting mood. This is perfect for Target, and its product tells the tale.

Unlike Neil, I think Target should NOT focus more on grocery. It’s a low-margin business that probably was, in my view, a mistake to get into in the first place. Sure it drives traffic, but it’s low-margin traffic. I really think Target’s core strength is in its private-label clothes, baby wear and home goods. And they’re executing well.

One key word will dominate retail success for the next decade – relevancy. In a customer-driven world, it is not about the product-centric past. The retailers who are winning are focused on convenience and adding value to the customer’s experience. Target’s successes have been won by focusing on relationships with customers and establishing relevancy, especially for its core target segment of women. The whole (experience) is greater than the sum of the parts.

The unsung and often hidden success factor is logistics. While Target emphasizes its stores, today’s relationships are omnichannel. To remain relevant, Target and Walmart must continue to make their customer experience relevant and convenient wherever and however their customers choose to shop.

Kudos to the Target team for driving all the improvements necessary for the retailer to become the “it” destination again. The Target leadership team has kept their strategies firmly focused on driving a better customer experience in their stores and digitally, by improving/upgrading their stores, optimizing their merchandising and pricing strategies, and by being one of a handful of retailers who have got their omnichannel strategies operationalized.

Diversification will be the key for Target to continue their successful run through the balance of 2019. There have been discussions around Target becoming more of a force in the grocery game. Perhaps it would be best for Target to not try to compete directly with the Krogers of the world, yet have enough of a presence with prepared foods, organic offerings, and enough of an assortment to keep their customers from having to go to another store.

There are many smart decisions they have made that have contributed to their impressive growth. However, for a mass merchant, where they are winning is in their design aesthetic, which has lead to far more appealing experience. For all of the smart things Walmart is doing, they aren’t touching what Target has done with their redesigns. They’ve made their cosmetics section look similar to a salon, their electronics section similar to a specialty store. It’s just more appealing and shoppers will be more prone to browse and therefore buy more vs. just going in to get what’s on their list.

I’ll go with “easiest place to shop.” Departments are well defined and assortments within departments are well defined. They don’t over-assort (breadth) and they don’t over inventory (depth). Sometimes it feels like they have half the inventory density (units per square foot) of Macy’s or J.C. Penney. So they have a strong planning platform that they then populate with well-focused product. They are exercising strong left brain + right brain skills. That = “easy” in the eyes, and experience, of the customer.

Target is the Millennial department store. This is in stark contrast to the mall-based department stores rearranging their deck furniture displays and calling it a remodel. Struggling and failing to innovate, these stores are dragging down the malls with them. If Target has figured it out, why can’t other retailers?

Target’s omnichannel strategy has only been rivaled by Walmart. Opening up Target+, their marketplace, will allow them to build assortment their customers yearn for with less inventory risk. Grocery is still an opportunity for growth and their small store formats in metro areas have seen success with stocking the essentials in fashion, home goods, and grocery.

Isn’t it refreshing to hear a major retail CEO talking about investing in stores and not looking to cut costs. Target deserve all the success they get because they have taken on the challenges facing retailers and worked at ways to still perform, and they are showing it with these results.

The very fact they refer to customers as guests shows the way they think, encouraging store staff to treat them like human being and helping them. If you cut store staff and expect them to still be nice to customers, you will fail because they do not have the time. Take note other retailers out there – it is possible to perform in today’s environment if you work at it and invest in your future!!

The biggest clue may be summed up by answering the simple question: what bag would you rather be seen with? A Walmart bag? Or a Target bag? Or should I say the oft-used cliché, “Targé”? Target has singularly managed to maintain its brand identity as the chic place to get fundamental stuff. To hold that aura, you have to fearlessly execute on multiple levels – merchandise, shopping experience, pricing, marketing, technology, culture – to make your core customers come back for stuff they can get elsewhere. It’s about feeling good walking out with that red target on your bag. But it is a relentless path to keep that feeling going.

Much of today’s Target specialness is an afterglow of the formative years’ proprietary designer-on-the-cheap merchandising strategy. That initial differentiation established “Targé” and might be a place to revisit to keep the newly arriving Millennials coming.

Target’s success is a great example of a retailer trying multiple things at once, and executing them well. That has driven their success. From trying new store formats, including smaller stores, to redesigns of existing stores, to new private label merchandise, to having multiple, easy ways for consumers to buy from Target. All of these have come together to produce outstanding results for Target, and they have done this in a way that is different from Walmart while in many ways better than what they have done (notwithstanding Walmart’s tremendous gains in e-commerce). This just shows that long-term investment (as noted, they started this investment in 2017) can pay off for a retailer that recognizes the benefits and waits for them to properly materialize. If there is one area of improvement to be called out, it might be in grocery, as Neil points out. To date, this simply hasn’t felt like they’ve put maximum effort into it. However, Paula raises a good point –should they even bother? I can see Target finding their place here… Read more »
0
|
0
-   Share

Braintrust
"Target has returned to its cheap chic roots. People are responding."

"Target’s successes have been won by focusing on relationships with customers and establishing relevancy, especially for its core target segment of women."

"For all of the smart things Walmart is doing, they aren’t touching what Target has done with their redesigns."