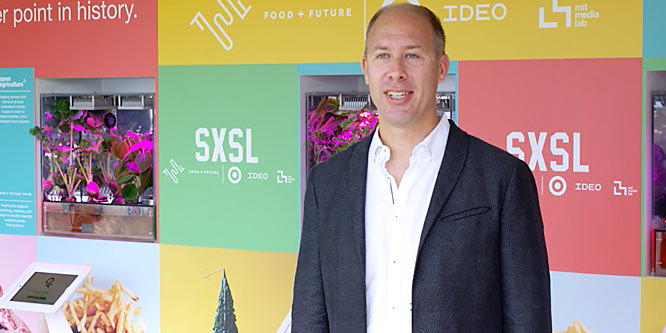 Target is looking to shorten the distance from farm to plate with a planned test of vertical farms, an agricultural technique that involves growing plants and vegetables indoors in climatized conditions.

The initiative, to take place within select U.S. stores, is part of ongoing research and development being pursued by Target’s Food + Future CoLab, a collaboration with the MIT Media Lab and Ideo launched last November that has been exploring urban farming, food transparency and food innovation.

According to Business Insider, tests of the vertical farms could begin in spring 2017. If the trials succeed, Target’s stores will likely be filled with growing leafy greens, the most common stock for vertical farming at present. Potatoes, beetroot and zucchini could potentially be made available as well. MIT could give Target access to ancient seeds for rare tomatoes or peppers.

“Down the road, it’s something where potentially part of our food supply that we have on our shelves is stuff that we’ve grown ourselves,” Casey Carl, Target’s chief strategy and innovation officer, told Business Insider.

Making use of artificial lights, vertical farming is expected to see a growth spurt in part because food cultivated by farms is being challenged by rapidly increasing urban populations. Besides using less water, taking up less space and being closer to the consumer than traditional farming, vertical farming also addresses demands for healthy food without pesticides and avoids weather risks.

On Oct. 3, key members of Target’s Food + Future CoLab team showed off the project at the South by South Lawn (SXSL) festival at the White House. The technologies showcased included the team’s Open Agriculture lab inside the MIT Media Lab that’s exploring vertical farming and ways climate and other factors affect food production.

“Open Agriculture is about creating more farmers,” said Caleb Harper, principal scientist at the MIT Media Lab. “About two percent of us in the U.S. are farmers today, and the average age is 58, so what’s the next generation look like? They’re gonna be coders, hackers, makers.”

DISCUSSION QUESTIONS: What do you think of Target’s vertical farming test? Do you see more potential benefit to the supply chain or marketing efforts? Is this something other grocers will be doing in the future?

Please practice The RetailWire Golden Rule when submitting your comments.
Braintrust
"I like the idea. Even better, if they structurally could support it, would be growing this stuff on the roofs of the stores. "

19 Comments on "Target to test vertical farms in stores"

I like the idea. Even better, if they structurally could support it, would be growing this stuff on the roofs of the stores. I’ve seen this done in other countries and it helps lower HVAC costs while adding oxygen to the air.

I agree, Paula. It would also be a huge aesthetic draw.

I think vertical farming is a good idea and salute Target for testing the concept. But it can work for the retail giant only if they can keep products in stock. If Target’s test succeeds, expect other retailers to quickly follow.

The scariest stat in the article is that average age of farmers is 58. Not sure who will carry the torch in the next generation. If this helps makes farming more appealing by matching it with technology — that’s a win.

For the grocer it can help if you can provide a product the consumer wants and consumers want to know the amount of pesticides and the growing conditions of what they are buying. It also leverages the local-grown trend and mentality of consumers.

You are right to be anxious about traditional field farming, Robert. But as a matter of fact, hydroponics is becoming hot stuff for Millennials. We’ve ruined most arable soil. We’ve sprayed (poisoned) everything we can reach. Fortunately this approach does not need pesticides or non-organic chemicals at all. There are a number of companies providing turnkey hydroponic facilities.

Vertical farming is genius. Vertical farms are more resistant to climate changes and storms. Plus, the holistic aesthetic of an organic vertical farm will allow Target to compete for natural foods customers. If they market this idea correctly it will be a huge revenue builder.

I’ve suggested that on RetailWire several times. This is a movement and if you are at all connected to food, pay attention. Many of the major chefs on the Las Vegas strip are so fed up (sorry) with the quality of produce that they’re supporting a major hydroponic operation to be set up right among them. Senior facilities, schools and residences will rapidly be doing this as well. Restaurants and grocery stores have got to get involved. Imagine a salad you eat minutes from being harvested!

We can get 20 varieties of lettuce from a couple who have a trailer turned into a hydroponic station and the difference is amazing. We don’t even bother to wash it.

This item makes my weekend (unless the Arizona Cardinals lose again).

Just one caveat: Not all hydroponic operations are equal. There is complex water and plant science behind this approach and you need to know what you’re doing.

The concept shows real outside-the-box thinking by Target. I believe this could have real value to consumers as well as demonstrating social responsibility. The design and its implementation creates an incredible immersive and experiential environment for shoppers. As different fruits or vegetables ripen they could bring shoppers back into the store.

Good for marketing and PR, but the scalability, execution and ultimately the ROI may prove to be a significant challenge. That said, I like the concept and it is a step in a good direction.

I also love this concept. It falls in line with Target’s old Tar-chic brand image. It likely will have a very positive effect on customers. Especially the Millennial crowd who would view this as very cool and good for you too.

Kudos and my 2 cents to Target!

Wow. Normally, you would think “crawl, walk, run” in terms of tests, but this is straight to run IMO. You have to give them credit for taking the leap, but I’d think you’d want to get MUCH better at the task of presenting produce better first (crawl).

In any case, it’s great to see a predominantly physical retailer try something outside of their normal M.O. After all, the competition is Amazon and they’ve got Echo, Dash, Prime, drones, etc. — so getting up to speed with that mindset is paramount.

This is not a new idea. Fiesta Supermarket built a store in Houston more than 30 years ago with a vertical garden. It looked great, got a lot of attention and cost a lot of money. Five years after they opened that store the garden was gone. The novelty wore off and cost of up keep was to high.

Lots of things have changed over the last 30 years. I will bet this is one thing that will go away again in five years.

FYI, Whole Foods incorporated a rooftop greenhouse into the design of its store in Brooklyn, opened a few years ago. They partnered with an agribusiness named Gotham Greens to make it happen. When announced, they claimed it would be “the nation’s first commercial scale greenhouse farm integrated within a retail grocery space.” Details here…

This is an old article … I believe there are more in Amsterdam now.

You gotta love the fit of this with where Target wants to go with food — image wise, that is. The limits of production can be stretched with hydroponics and vertical farming — but not broken. So this will remain primarily an image-generating exercise for the near future. The only risk I see for Target is if they start merchandising ALL the parsley in front of the grow pod — insinuating that that’s where it came from — when the most likely case is that only a small portion of it, occasionally, came from there and the rest came on a truck. Now, as for those “grow lights” — I seem to remember seeing them in a few rooms in the fraternity house? But they sure worked well …

You are right about improving production, Ben. As you and I have discussed, there are ways to significantly accelerate and improve the growth cycle of plants by changing the resonance of the water. It normally takes 28 days to mature a head of lettuce and it’s possible to reduce that by five or six days while improving quality. That means going quicker to market which can increase margins considerably.

It’s too easy to poke holes in new ideas and it’s the quickest path to stifling any new ideas. Target’s vertical farming test will provide the company and its collaboration partners with more real-world data points on ways to transform the path from farm to fork.

Don’t view this in isolation, but imagine what else is possible (to Paula’s point) and how this creates even greater awareness about what we put in our bodies and the whole transparency issue around packaging.

Of course there’s a marketing angle, but it’s not — and should not be — the driving force. Let’s see how well Target creates an easy to communicate and understand strategy around its approach to food and what leadership role it is prepared to take on as a brand.

They don’t have much luck selling food, will they have more luck growing it? Sorry, as much as I’d love to give my blessing to this idea, I just can’t see it working. There may be people tickled green by the idea of picking their own produce, but I’ve no reason to think that they particularly overlap with Target’s customer base. Not to mention all those little things like humidity and temperature control, how much could really be grown within the store space (if technical issues can be worked out). I’m highly dubious of some of the numbers cited in the articles … the more I think about it, the more daft it sounds.

Great example of big thinking. The best part is that customers will love this … and Millennials, particularly, will appreciate the authenticity.

Braintrust
"I like the idea. Even better, if they structurally could support it, would be growing this stuff on the roofs of the stores. "