The new boss is different than the old boss at Starbucks 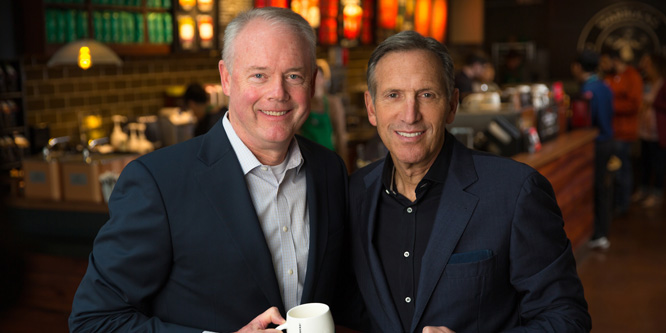 Leaders with the vision of Howard Schultz are few and far between in retailing. It’s clear, by his own admission, that Kevin Johnson is no Howard Schultz. Whether the current CEO of Starbucks would benefit from being more like his predecessor remains to be seen, but for now he believes that his way is the best way forward for the company.

The Wall Street Journal reported on one apparent contrast between Messrs. Johnson and Schultz. While Mr. Schultz envisioned a future in which Starbucks would operate 1,000 upscale Reserve cafes and 30 Roastery concept stores, Mr. Johnson is pumping, if not slamming, the brakes on the idea. Instead, he has called the 1,000 locations figure “aspirational” and is only committing to test six to 10 Reserve stores to determine if they will support building more.

Reserve locations are decidedly different than the typical Starbucks. Their open floorplans feature a Princi bakery, a liquor counter and coffee bars offering high-end beans and drinks. While the seating approach is communal, the service focuses on a custom approach.

Analysts and investors have been getting fidgety over Starbucks’ results, CNBC reports, as its comparable store sales growth has fallen off. For 2018, the chain reported gains of two percent for the first two quarters, three percent in the third and four percent in the fourth. While the numbers show an upward trend, analysis indicates that gains have come as the result of higher prices at the chain while traffic is not growing as quickly. On the positive side, customers who visited Starbucks in the fourth quarter spent more time on the premises than in the past.

One saving grace for Mr. Johnson, who became CEO in April 2017, is that the share price of Starbucks is up seven percent over the past year. That has given him cover to pursue his agenda without facing opposition from investors who may be longing for a return to the days of big growth under Mr. Schultz.

DISCUSSION QUESTIONS: Is it cause for concern that Kevin Johnson doesn’t appear to share the same vision for Starbucks as Howard Schultz? Is Mr. Johnson’s approach what Starbucks needs at this point in its history?

Please practice The RetailWire Golden Rule when submitting your comments.
Braintrust
"The divergence of Schultz’s vision and Johnson’s opinion is exactly as it should be. Let Howard dream and Kevin execute."

"As we slide into a natural downward economic cycle, it should be little cause for concern that Mr. Johnson has a different vision than its founder."

"Vision may change, but stockholders and their expectations remain the same."

This remains to be seen. If Starbucks wanted the same thinking as they had under Schultz, then they should not have installed Mr. Johnson. The chain needs new thinking so I would wait and see what Johnson has in mind. Testing the new concepts on a smaller scale is not a bad idea and if they prove to be successful, they have not lost anything.

As we slide into a natural downward economic cycle, it should be little cause for concern that Mr. Johnson has a different vision (at least in the short-term) than its founder. Globally Starbucks locations have doubled in the last 10 years and, like anything, unbridled growth has an expiration date. Starbucks, albeit a behemoth, has growing competition as cited in the WSJ article from yesterday.

Unfortunately, Mr. Johnson has taken up the reigns at a time when Starbucks’ physical expansion has peaked, at least in its core markets. That necessitates a different approach. It is less about empire building and more about streamlining operations for financial gains and exploring ways to improve the productivity of different stores. Mr. Johnson’s different approach may, ultimately, prove beneficial in delivering this focus.

Entrepreneurs are different than managers. There are times when a company must move from the visionary entrepreneur to the professional manager. Starbucks tried it once and had to bring Schultz back. Maybe this is the time to try it again.

The divergence of Schultz’s vision and Johnson’s opinion is exactly as it should be. Let Howard dream and Kevin execute.

Hard to tell just yet. Apple didn’t miss Jobs until recently so, given that as a case study, it could be a while. Walmart actually blew up (in a good way) after Sam stepped down, but that’s a little apples to oranges. And L Brands, well, we may never know.

I don’t think we’ll be able to accurately judge that question until 2025.

Kevin Johnson having a unique vision is not a problem.
Real cause for concern would be if he did not have a vision of his own at all and was simply trying to execute upon Schultz’s old vision.
Whether his direction is the absolute most profitable for shareholders is a different story than if it is the right one for the sustainability of this brand, but I don’t think that anyone would argue that piloting the Reserve cafe concept stores before a larger rollout is the wrong decision.

Howard Schultz has left a lasting and highly respected legacy at Starbucks. Companies are dynamic, human, living entities and so it should be expected that the next leader assumes the mantle with their own distinct vision and aspirations. Starbucks is firmly rooted in its underlying framework of values and ethos, and as one of the leading, most admired brands and operators, will continue to do well under Kevin Johnson’s leadership.

The positive news and physical presence of new stores is a net positive for Starbucks unless these are clear and big money losers.

I am concerned that by eliminating the goal, Johnson is cutting off positive public perception as well as the excellent reminder of stores and that will further hurt same-store sales.

It’s hard for me not to hear his pronouncements as the kind of aggressive, controlling “hunker down” management which is bad for retailers.

I certainly hope I’m wrong. Starbucks is a great company and delivers a valuable product.

I don’t think that it’s cause for concern that Johnson has a different vision than Howard Schultz. What is cause for concern, though, is if Johnson’s vision doesn’t include unique, experiential concepts — like Roastery — to help Starbucks remain relevant. After all, Gen Z consumers are wary of “the man” and demand a customized experience. So even if Johnson doesn’t share Schultz’s vision — he still needs to have a vision to modernize the chain for the next generation.

The lasting legacy of Howard Schultz at Starbucks is his belief in the experience side of coffee drinking, and that of providing a place to relax, connect and work. However, as the brand has scaled, and has been commoditized, your local neighborhood Starbucks experience remains as it was perhaps 10-15 years ago. Yet, the typical Starbucks customer remains very loyal to their brand.

The Roastery experiential coffee house investment and commitment by Shultz was a welcome one, and hopefully, Kevin Johnson and the Starbucks organization will recognize the value of investing in their coffee houses. New players have entered the coffeehouse game, as we have seen in NYC the emergence of Bluestone Lane, Irving Farm, Birch, and others, who have focussed on the customer experience beyond the transaction.

While these companies do not pose any immediate threat to the global coffee giant, it is a reflection of the changing marketplace and consumer preferences.

Vision may change, but stockholders and their expectations remain the same.

Ultimately the responsibility is the same: increase profitability. This is a task more difficult for a mature company versus a growth company.

Starbucks is moving from a visionary to a tactician. In retrospect we’ll see that as a good move.

Kevin Johnson gets his shot and was hired by Howard to do so. Starbuck’s fast growth via new stores days are over so market tremors will be felt much more severely — whatever they do will have to be carefully tested as Kevin demands. I’d also be slightly concerned about a large scale opening of a “luxe” version of Startbucks with an impending recession (popular economic notion) on the 12 month horizon. Walk before you run on core brand derivations.

The jury is definitely still out on this one. Starbucks is a mature company at this point and their home market of North America is pretty saturated for them. It’s remarkable and a tribute to Howard that he was able to drive a second era of growth when he returned as CEO. Starbucks has an enviable platform both digitally and with their physical stores, but I believe that they need to keep evolving their legendary experience to maintain customer loyalty. It would be a mistake to focus on down-market competition like Dunkin’ and McDonald’s at the expense of premium, reserve experiences that create the halo for the overall brand.

The transition from entrepreneurial visionary to professional management is a natural one in the growth of most companies. While both might be governed by stockholders’ expectations stockholders are likely to grant the founder more latitude than their successor. The change in focus at Starbucks is an expected one. He grew it and we now need you to manage it.

It’s not a visionary difference. It’s the speed of its implementation.

Braintrust
"The divergence of Schultz’s vision and Johnson’s opinion is exactly as it should be. Let Howard dream and Kevin execute."

"As we slide into a natural downward economic cycle, it should be little cause for concern that Mr. Johnson has a different vision than its founder."

"Vision may change, but stockholders and their expectations remain the same."