To catch a Walmart return thief 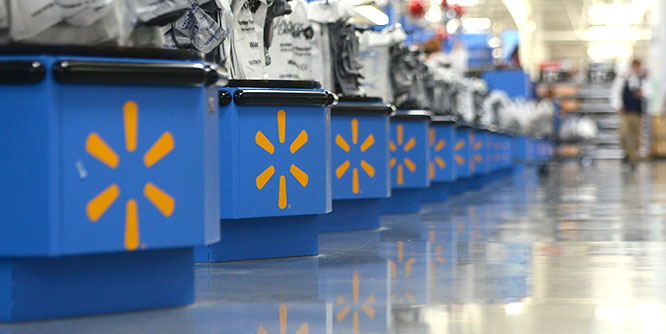 A 23-old-year Walmart shopper has been arrested and accused of making $1.3 million worth of fraudulent returns at 1,000 of the chain’s stores nationwide over an 18-month period.

The alleged fraudster, Thomas Frudaker, was arrested last week after employees at a Walmart store in Yuma, AZ discovered that a computer he returned was missing internal parts. Authorities have charged Mr. Frudaker with two counts of fraud, two counts of criminal damage and two counts of theft.

Walmart, according to reports, has been working with law enforcement authorities to apprehend the person or persons engaged in this wide-ranging fraud.

“We have strengthened internal processes to identify and help prevent this type of criminal conduct,” according to a statement issued by Walmart to Business Insider. “We appreciate the quick actions of our associate and swift response from the Yuma Police Department, which provided the break to make an arrest.”

Return fraud and abuse has been estimated to be somewhere between a $10.8 billion and $17.6 billion problem for retailers in the U.S. by the National Retail Federation.

The perceived bottom line impact of this activity has led numerous retailers, both physical stores and e-tail, to step up efforts to catch people engaged in fraudulent returns while even retailers known for liberal return policies have banned individuals suspected of such activity.

“We want everyone to be able to use Amazon, but there are rare occasions where someone abuses our service over an extended period of time,” a spokesperson for Amazon told the Journal. “We never take these decisions lightly, but with over 300 million customers around the world, we take action when appropriate to protect the experience for all our customers.”

Even L.L.Bean, which was famous for its lifetime guarantee, rolled the policy back to a year after finding that some individuals were abusing the policy.

“Some view it as a lifetime product replacement program, expecting refunds for heavily worn products used over many years’” wrote Shawn Gorman, L.L.Bean’s executive chairman, on the company’s Facebook page. “Others seek refunds for products that have been purchased through third parties, such as at yard sales.”

DISCUSSION QUESTIONS: Is the 23-year-old accused of cheating Walmart out of millions of dollars in return frauds a symbol of widespread problem in retail or an anomaly? Where are the best opportunities for retailers to cut into return fraud?

Please practice The RetailWire Golden Rule when submitting your comments.
Braintrust
"Could RFID be another tool that could help these employees catch more fraudsters?"

"This level of return fraud is an anomaly. It is leveraged by expensive electronics, with internal parts that cannot be easily seen."

"Leverage image and video analytics to spot trending for repeat offenders. Couple that with AI and a real-time SMS alert system..."

8 Comments on "To catch a Walmart return thief"

Leverage image and video analytics to spot trending for repeat offenders. Couple that with AI and a real-time SMS alert system and this guy would have been caught months ago. The solution would be far less of an investment than the alternative.

This level of return fraud is an anomaly. It is leveraged by expensive electronics, with internal parts that cannot be easily seen. The majority of returns are easily reviewed, managed and properly returned. It is the few, especially at this level, who distort and hurt retail return policies for the many. Retailers need to better manage their returns without stopping them altogether. This will allow for a control of fraudulent returns while still embracing an open return policy.

He just became the face of this type of crime. I expect that other retailers will use his image and story and ask their teams, do we have any of these? And how do we stop them?

He made it harder to be identified by using his scheme across 1,000 locations. The only good news is that it is likely that the majority of people who engage in this type of activity don’t do it at this kind of scale.

He was caught not by technology but by alert employees. I agree with Dave that technology could have been utilized but well-trained employees will always play a role in preventing this type of fraud.

During the BrainTrust Live discussion last week, Ken and I talked about RFID and some of the wider impacts it could have. Is this one of those places? I agree with those who posted before me that employees are your primary asset to catching these sorts of rare thieves, but could RFID be another tool that could help these employees catch more fraudsters?

One of the best areas for retailers to cut down on return fraud is not with individuals (this case being an anomaly) but with organized retail crime (ORC) which has a tremendous impact on the industry at about $30 billon per year according to the NRF Crime Survey. Merchandise stolen through the hierarchy of ORC is returned for gift cards/store credit then resold or fenced through physical or electronic locations. A large problem with ORC is it is a major gateway crime into drugs and weapons. Reducing this type of large scale fraud requires a mass collaboration across brands and retailers, using state of the art technology and partnering with law enforcement agencies.

It is nearly impossible to stop the bad guys — there will always be a new scam or technique. It’s unfortunate. However, it certainly is possible to track exactly who is making returns by requesting identification on every return. I believe it was Walmart a few years ago that mandated only three returns without receipt are accepted. They simply kept records of names and returns. If this is, or will be, such a big problem (which it sounds like it is), I would suggest creating a way to keep names of suspected return abusers in a database and cut their ability to return an item (perhaps electronics-only or store-wide) in any of the stores, regardless of where it was purchased.

Security cameras riddle the ceilings and parking lots of retail stores across the globe. As Dave (Teradata) noted, the use of facial recognition software and AI would have spotted and identified Mr. Fudraker a long time ago. While privacy is a fundamental concern, these thieves are costing all of us billions of dollars. Is that the “price” of privacy we’re all willing to pay? I think not.

Without knowing more (any?) details, it’s hard to comment on how representative of a problem Mr.Frudaker was, but I think it’s safe to say he certainly wasn’t a typical example of people who return things. So we’re still left with the same old questions — when do returns become “excessive” and at what point does normative, if devious, behavior like returning that “worn-once” hat after a wedding, get upgraded to fraud? Lacking a consensus on this, I think we’ll be left nibbling at the edges, and throwing around impressive, but amorphous numbers.

Braintrust
"Could RFID be another tool that could help these employees catch more fraudsters?"

"This level of return fraud is an anomaly. It is leveraged by expensive electronics, with internal parts that cannot be easily seen."

"Leverage image and video analytics to spot trending for repeat offenders. Couple that with AI and a real-time SMS alert system..."