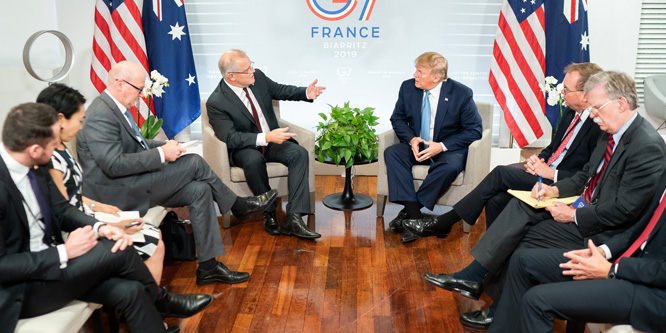 The developments rocked the stock market and heightened concerns that the continuing trade war could drive the U.S. into a recession. Earlier today, as reported by Reuters, President Trump, said Chinese officials had contacted his administration and expressed a desire to return to the bargaining table. However, with the on-again, off-again dynamics at play, the retail industry continues to deal with uncertainty.

In reporting second-quarter results in recent weeks, a number of U.S. companies, including several retailers, have already pared profit and sales expectations for the year due to tariff fallout.

Macy’s said it was forced to raise prices on some luggage, housewares and furniture to offset the costs of a 25 percent tariff implemented in May on those types of goods. Jeff Gennette, Macy’s CEO, told analysts, “We know from the earlier tranche of tariffs though that today’s customer doesn’t have much appetite for price increases.”

Beyond the expense and time spent finding alternative sourcing, bringing in goods earlier to avoid tariff deadlines and re-negotiating prices, the uncertainty is leading companies to postpone or cancel projects.

In a white paper released last Thursday, Tim Anderson, SVP of Hilco Valuation Services, said multiple retailers had either delayed anticipated product/line launches or cut production altogether. He wrote, “This is especially true where companies have determined that revised price points after the new tariffs would have well exceeded what their research told them was the maximum pricing tolerance level for a new product.”

DISCUSSION QUESTIONS: What are the obvious and less obvious repercussions retail may feel from the escalating trade war? What, if anything, can retailers or vendors do to mitigate the negative effects of the trade war?

Please practice The RetailWire Golden Rule when submitting your comments.
Braintrust
"What’s the end game? What does 'winning' look like?"

"In recent years, many U.S. retailers and brands have flourished in China because it’s the biggest retail market in the world and products “Made in the USA” are in demand..."

The repercussions of this protracted and escalated trade war are many – none of them good. As new tariffs kick in, prices will rise and consumer confidence will fade, retail sales and negative media coverage will follow which will exacerbate the situation. While switching suppliers or moving manufacturing to other countries are options, they are not simple or without cost and effort. And it takes time. At the risk of sounding fatalistic, for most retailers, hunkering down and waiting until calmer heads prevail on the trade front may be the only thing they can practically do.

The costs of economic uncertainty are potentially as damaging as the monetary costs borne by manufacturers, retailers and consumers. Just today, for example, the President backed away from his inflammatory rhetoric from Friday — but could just as easily reverse course on Twitter given the right provocation. Hopefully no manufacturers will take seriously the threat of punitive action if they decline to “follow orders” and pull up stakes from China. Like it or not, there are countless companies with decades of established relationships in sourcing, product development and logistics — not so easy to find a suitable replacement in the U.S. or elsewhere.

I just wrote a blog in Forbes about this. One thing no one is really talking about is the impact on retailer buying power and whether bringing in extra inventory earlier will cause greater carve-outs from revolving lines of credit and asset-based loans. I’m not going to shill for myself here, but if you find it, great.

Bottom line? Marginal retailers could find themselves insolvent if the borrowing base decreases due to the risk of aged inventory and reduced gross margin caused by extra shipping, storage and handling costs on the INBOUND side.

The sell side is obvious. The buy side, not so much. This is BAD.

When I talk to my clients, whether they’re fashion or CPG companies, brand marketers, technology providers, they’re all sweating the tariffs, but it’s the unpredictability and volatility that’s freaking them out because it impacts their ability to plan their business.

The fundamental premise is all wrong because the tariffs are rooted in political punishment rather than providing actual benefits to U.S. companies. The obvious repercussions are higher prices, however, larger, diversified companies have options:

Less obvious is the disproportionate disadvantage being dealt to small businesses that aren’t as diversified and therefore have fewer options.

What’s the end game? What does “winning” look like?

In some ways, it’s even harder for bigger businesses who rely on seasonal borrowing.

Fashion or style or trend may be of the season or even of the moment, but sourcing and the management of the whole supply chain process is a long-term process and commitment. It’s part of the bedrock of being able to operate a stable and and flexible and profitable business. It’s not like going to the grocery store one day and then simply shopping at a different store the next day. The capricious nature of the current tariff scenario is neither thoughtful nor strategic. It’s adding a tax to the consumer on top of the tax cut they didn’t really get. I always regarded tariffs as a kind of leveler of the playing field, however imperfectly they may have been applied. They were never intended to turn the playing field into a trampoline.

Someone is paying for the tariff, and it’s pretty obvious who that will be. The increased costs will be passed on to the consumer. Increased prices for certain items will trigger a “tightening of the wallet” effect at a minimum. And if the market continues to react the way it has with these tariffs looming in the future, it could trigger even more financial havoc. All that said, price increases can be managed. Different buying and manufacturing processes can help. One specialty retailer I spoke with educated his customers about the higher prices he’s been subjected to because of rising import costs. He found the transparency was helpful with his customers.

This is going to sound bleak, but there’s a story my grad school advisor told me that the CEO of JP Morgan got down on his knees and begged President Hoover not to sign the Smoot-Hawley tariffs bill into law. Businesses around the country are metaphorically doing the same with the current administration and getting the same results. The Smoot-Hawley tariffs extended the Great Depression by at least two and perhaps as much as eight years. The Trump Tariffs won’t start another depression but will almost certainly exacerbate any economic downturn. And, like squirrels getting ready for a bad winter, the only thing retailers can do is try to store away enough nuts to get them through.

U.S. retail companies with a China strategy have whiplash from the volatility of the escalating trade war.

In recent years, many U.S. retailers and brands have flourished in China because it’s the biggest retail market in the world and products “Made in the USA” are in demand in China due to the goods’ high quality and prestige. Cross-border e-commerce has remained strong, especially for American companies selling beauty and baby products online in China.

Now threats of insular protectionism will hurt these American companies — especially in time for Black Friday, the day U.S. brands have been most in-demand among Chinese online shoppers.

This is our first real look at a Trump economy. And if the current occupant of the White House decides to get serious about removing American companies from China, huge and industry-roiling changes will ensue. Diversify your investments accordingly.

What about an already maxed out consumer? Stagnant wages with an increase of the cost of living. Those living with this challenge will continue to seek more affordable options.
This will exacerbate the decline of the less relevant options.

I’d rather not pile on the flagrantly obvious effects of the trade war. Perhaps less obvious are the unintended consequences for smaller retailers that cannot survive with or without passing on their higher costs. The low cost leaders will gain market share while simultaneously establishing new supply flows that will further strengthen their relative and absolute positions. Lastly, once consumers slow down their spending, then the pumping heart of our economy will sputter and threaten to flatline. Nothing good or easy here, yet converging on retailers are two distinct realities – one formed around transactions in a zero sum game, the other realized through the centuries in the long view of civilizations.

China has exploited NAFTA. At the same time, U.S. leaders exploited U.S. manufacturers, by promoting cheap labor in China, closing U.S. factories nationally. My family experienced NAFTA first-hand, not able to fight Chinese cheap labor, losing a 50-year-old manufacturing business. Twenty-five years have gone by and still, politicians have failed to address the inequalities and tariffs imposed upon the U.S. by China leveraging NAFTA for its own dominance in trade. Including theft of U.S. intellectual properties. China’s mission is to usurp the U.S. as the dominant world power. The U.S. must put checks and balances on China in a number of ways, including trade inequities. I believe “short term pain for long term U.S. manufacturing worker gain” is an appropriate response to China. Manufacturing is shifting to robotics managed by a new breed of factory workers. The U.S. must not turn over huge industries to China.

Hi Cynthia. I totally agree with you on this issue. Trump is not the devil. All the previous administrations have swept the China monopoly under the carpet, and someone finally is speaking up for America. Yes the short term will be difficult, but unless we stand up to the biggest thugs in the world, we will lose the war. Technology theft alone is enough for me to go after China. We can compete with anyone in the world if we have the proper tools, and a labor force that works in tandem with the manufacturers. I have spent many years coming up with ideas that benefit the workers and the manufacturers without sacrificing quality, and still keeps costs down. There is a way, and maybe I’ll put in on a discussion blog if I can. Make a long term deal now and we all will be better off for the next generation.

Thanks for your comment, Tony. Trade needs to be fair. Equal for all. Please send me the link if you post on a discussion blog.

This “trade war” is what happens when congress relinquishes its constitutional authority to act as a check and balance to the Executive branch. This was done as part of the International Emergency Economic Powers Act of 1977, which allows the president to implement tariffs during a national emergency. This is the key act, but there are also several others which need to be repealed to bring our system of checks and balances back into constitutional balance. Also, Tariff wars can only be lost, not won, since imposing a tariff impacts everything coming into the country, from cradle to grave, as a primary product, secondary product (in the manufacturing process), tertiary product, and further down the line. As well as products that are being sold internally or exported. Amplify all of this in a global economy, and the leverage is so negative that any countries who are hurt by a tariff only have a “way out” by retaliating with their own tariff. And the process just gets worse. Realize that tariffs don’t just impact the products… Read more »
4
|
0
-   Share

BIARRITZ, France/BEIJING (Reuters) – U.S. President Donald Trump on Monday predicted a trade deal with China after positive gestures by Beijing, calming global markets that have been roiled by new tariffs from the world’s two largest economies.

Braintrust
"What’s the end game? What does 'winning' look like?"

"In recent years, many U.S. retailers and brands have flourished in China because it’s the biggest retail market in the world and products “Made in the USA” are in demand..."