Walmart makes a deal to automate and own the last mile 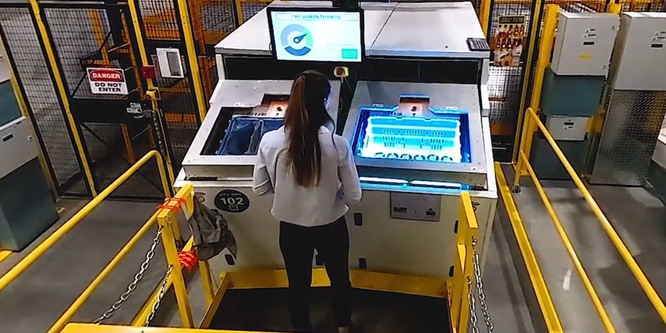 Walmart’s strategy for owning the last mile has come into clearer focus with news that the retailer has acquired the robotics automation specialist Alert Innovation.

The two companies first began working together in 2016 on ways to customize robotic technology for deployment in Walmart’s market fulfillment centers (MFCs). Walmart began testing Alert Innovation’s Alphabot system in late 2019 at an MFC built into the back of a supercenter in Salem, NH.

The system uses autonomous carts to retrieve and assemble online orders of frozen, refrigerated and shelf-stable products for pickup and delivery. Associates check each order to assure accuracy and bag the products to go out to customers. Fresh foods continue to be picked by Walmart associates.

A distinguishing feature of the system, according to David Guggina, senior vice president of innovation and automation, Walmart U.S., is that the bots move “horizontally, laterally and vertically across three temperature zones without any lifts or conveyors. This provides fewer space constraints inside the MFC and eliminates the need to pause the entire system for bot maintenance.”

Walmart has continued to put more emphasis on local fulfillment in an effort to deliver orders to customers more quickly and at a lower cost. This is particularly important for the chain that generates most of its revenues in margin-challenged grocery categories.

Scaling the technology, Mr. Guggina writes in a company blog, will help Walmart further build on the strength of its local operations. The chain has 4,700 stores within 10 miles of 90 percent of the U.S. population.

Walmart will continue to build on technology investments in its regional distribution centers and its next-generation fulfillment centers (FCs). Earlier this year the retailer announced that it would open four FCs in Joliet, IL; McCordsville, IN; Lancaster, TX; and Greencastle, PA over the next three years.

The FCs feature automated, high-density storage systems that streamline a manual, twelve-step process into five robotics-driven steps: Unload, Receive, Pick, Pack and Ship. In the picking process, warehouse workers only have to wait for a tote to bring the ordered item instead of walking up to nine miles each day across multiple floors to find products.

DISCUSSION QUESTIONS: What will Walmart’s acquisition of Alert Innovation mean for its last mile fulfillment? How does the retailer’s use of automation in the supply chain match up against rivals including Amazon, Albertsons, Kroger and Target?

Please practice The RetailWire Golden Rule when submitting your comments.
Braintrust
"Walmart’s investment will help to protect its grocery leadership and keep up with rivals’ innovations."

"It is Walmart’s heritage to wring costs out of the distribution system."

"Walmart’s acquisition of Alert Innovation will accelerate the retailer’s dominance in grocery delivery."

Automating its fulfillment centers with automation from Alert Innovation is a smart strategy to reduce lead times for fulfilling omnichannel orders. Most of the big retail players are keenly focused on automating the fulfillment process to speed delivery times. The Holy Grail is automating the true “last mile” of delivery to the customer to improve speed and reduce costs. The last mile is the hardest nut to crack.

Walmart’s investment will help to protect its grocery leadership and keep up with rivals’ innovations.

This is an excellent move by Walmart, considering how consumers have accepted grocery pickup at store and/or delivery to home. And with Walmart’s scale and their store proximity to 90 percent of the U.S. population, even small efficiency gains in pick/pack times with bots translate into hundreds of millions of dollars that drop to the bottom line. Clearly this will up the ante for other competitors to leverage technology in new and innovative ways.

This is laying the groundwork for future automation for Walmart, while ensuring that they keep embracing efficiencies that they will need to leverage their supply chain against their rivals. This is a smart move and will prove to be just one of many that Walmart makes as AI and supply chain become even more important.

This is a wake-up call for grocers. Walmart, Kroger, and Albertsons are leading the investment in MFCs. These highly automated facilities decrease the cost of last-mile deliveries by locating the entire fulfillment process closer to the demand while reducing the order fulfillment cost.
A handful of retailers have the appetite or deep pockets to acquire an established player in the space. Will Walmart’s move force Albertsons to change its strategic partnership with Takeoff and acquire that company? Today, while Kroger and Walmart’s approach to these fulfillment centers varies in number and facility size, both are highly efficient and can process orders in under 30 minutes. The economic logic behind MFCs justifies investments in grocery as online orders’ growth rate continues to increase. The leaders are growing their fulfillment flexibility, cutting down on order-to-customer times, and shrinking their operational costs. The rest of the grocery industry will need to adopt these advanced fulfillment models to remain competitive.

Amazon figured out the last mile, automation, and fulfillment. Walmart (and others) knows how important delivery, shipping, and fulfillment is to maximize their opportunities for revenue and customer retention. This isn’t an experiment. This is what it takes to stay competitive.

To me, the key is that fresh foods continue to be picked by store associates. This strategically automates the parts of the order that consumers are comfortable with automating, while keeping the human element for the aspect where consumers demand it to be so. I look forward to seeing metrics as to how this maximizes efficiencies over time and if it somehow allows for higher rates of online grocery shopping adoption.

Walmart’s acquisition of Alert Innovation will accelerate the retailer’s dominance in grocery delivery. The focus on low-cost and efficient picking will help the bottom line, reduce spoilage, and increase speed to consumers. Local fulfillment benefits the environment which should be more widely marketed by Walmart. The acquisition strategy works well for Walmart’s culture and expectations are made clear to partners. Just look at the benefits of Jet.com’s acquisition.

Walmart has always been a leader in logistics. A critical piece of Walmart’s vision, which is on display, is its investment in fulfillment technology that is outside of the monster size DCs and much closer to the consumer. They are continuing to invest in where the industry is going and not in what it currently is. It is also an investment that anticipates the continuation of a shrinking pool of retail employees.

It is Walmart’s heritage to wring costs out of the distribution system. This goes back to the days of Sam Walton and his philosophy of giving the best prices to the customers. No retailer, except Amazon (if you want to call Amazon a retailer), has ever been able to match Walmart on logistics.

As online continues to grow, this portends markets split into the haves and have-nots.

Given the challenging job market, automation will be critical for brands and retailers to optimize fulfillment and improve margins. Smart move for Walmart.

Walmart’s distinct advantage in the retail wars was in the logistics dimension. They had the most efficient and timely shipping operations, driven by data on location-specific product demands to ensure that each store had what was needed when it was needed. This looks like an extension of that same laser focus and efficient execution, but extending the final destination beyond the store, to the consumer. Bravo to Bentonville for knowing who they are and building on their already impressive core strength!

Automation will be critical to future operations from distribution, supply, or fulfillment centers. Walmart’s move is typical of large retailers looking to verticalize their business further. In this case, the automation function would be bundled into its fulfillment workflow. For last mile, there is the advantage of a single data and inventory view that can allow aggregation of multiple or split shipments, simplify order processing, and enable intelligent routing systems.

Comparably, Kroger’s Ocado, Amazon’s Kiva, Target’s Symbotic and Albertsons Takeoff relationships all perform to improve automation. How to compare? Difficult as each system is uniquely customized to the retailer.

The final mile has been a challenge for most retailers. Efforts by Walmart and others have attempted to solve this issue. Kroger in partnership with Ocado and Shoprite in partnership with Takeoff are becoming heavily involved with fulfillment and micro fulfillment centers. While all of these efforts to automate fulfillment will take costs and time out of the fulfillment process, none are currently designed to own the last mile. You still have to get these fulfilled orders to the customer. The same options exist: pickup at fulfillment center, pickup at store or delivery to the residence of the customer. Solve the final mile which is really to the home and you will have hit the grand slam.

Walmart continues its conversion from being a retailer to a technology, and arguably retail services, company. Few have the scale to be able to do what Walmart can and the opportunity to be able to buy up technologies, use them then sell an offering to others is amazing. Offering this out into a marketplace type offering for other smaller organisations to leverage should deliver huge benefits for Walmart but also maximise efficiency across the industry by limiting duplication of capacity.

With Walmart’s vast network, this is a smart move to improve customer experience for orders. If Walmart can do this right, and maintain competitive pricing, this will be a great experience for customers and a win for Walmart.

Braintrust
"Walmart’s investment will help to protect its grocery leadership and keep up with rivals’ innovations."

"It is Walmart’s heritage to wring costs out of the distribution system."

"Walmart’s acquisition of Alert Innovation will accelerate the retailer’s dominance in grocery delivery."