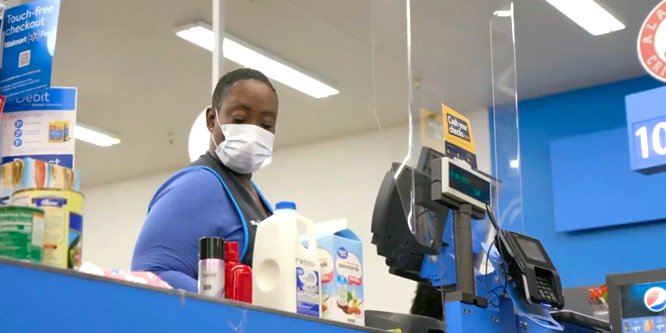 Retail, as they say, is detail. In today’s retailing world, many of those details go well beyond the fundamentals of buying and selling goods as is clear from reports of Walmart’s annual shareholders’ meeting, which was conducted virtually yesterday as a precaution to avoid further spread of the novel coronavirus.

The Wall Street Journal reports that Walmart chairman Greg Penner kicked off the meeting by noting “the extraordinary circumstances” that surrounded it. “There is the pandemic which we have been responding and adapting to for the past months, but also we are meeting under the shadow being cast by the violence of racism which is tearing at our country.”

Walmart CEO Doug McMillon addressed the pandemic and protests against racial inequality that have spread across the nation since the recorded killing of George Floyd while in the custody of police officers in Minneapolis.

On the pandemic, Mr. McMillon lauded the performance of Walmart’s associates.

“We are grateful to our associates from around the world. They are stepping up to serve our customers, communities and shareholders,” he said. “Our plan is to continue finding ways to help and serve. We’re thankful to have a strong and well-positioned business from which to do so.”

Mr. McMillon said more than 270,000 employees of the company’s 1.5 million workers have taken a coronavirus-related leave in recent months, according to the Journal. The retailer has hired over 300,000 workers to help it meet increased levels of demand since the outbreak of the virus.

Walmart reported a 10 percent gain in U.S. same-store sales during the first quarter as customers stocked up on food, consumables, health and wellness products and some general merchandise categories. The retailer’s online sales jumped 74 percent during the quarter as demand for delivery and curbside pickup of groceries grew.

“It’s important that we all understand that our problems, as a nation, run much deeper than one horrible event. The pain we’re feeling reminds us of the need to support each other and come together,” he said. “Until we, as a nation, confront and address these hard realities, we will never achieve the best of what we can be.”

“We’re motivated to continue our work related to diversity and inclusion inside our company and to find ways to influence the various systems that exist in our country in a more impactful, positive and inclusive way,” he said.

Whether by choice or circumstance, Mr. McMillon has found himself weighing in on critical social issues since becoming chief executive at Walmart. Last year, he and his company dealt with several active shooter events, including one at a store in El Paso, TX where a gunman who said he was targeting Mexicans killed 23 people and injured a like number.

DISCUSSION QUESTIONS: How will the coronavirus and racial issues raised by the killing of George Floyd shape how business leaders view their roles and those of their companies going forward? Are there retailing and consumer brand executives and companies that you see as examples for how businesses should operate in and out of times of crisis?

Please practice The RetailWire Golden Rule when submitting your comments.
Braintrust
"Maybe this tells us that faster change is on the horizon."

"Retailers are the intersection of business and society in the communities they serve. They can be leaders for change."

9 Comments on "Walmart sells inclusivity at its annual shareholder meeting"

The case of George Floyd (and other black victims) is a matter of life and death. It’s about an abuse of the constitutional rights of the black community via blatant brutality by authorities that are supposed to be there to serve and protect. That’s not an issue that anyone of good will can, or should, stand on the sidelines about.

And now we watch if Walmart corporate, and the Walton family, put their money where their mouth is. Sen. Cotton is up for re-election from Arkansas and he just called in the NYT for troops to be used against protesters. Are the Waltons going to demonstrate through their contributions and fundraising assistance if they stand with their abused customers, or with the abusers?

I am surprised by the strong response of business leaders. I doubt this would have happened even five years ago. This isn’t just Nike supporting Colin Kaepernick, this is support throughout the business community at the highest levels. I am impressed and hopeful that this is a change in attitude that sparks the necessary change that must come.

In the past when these types of companies made “supportive” statements, they were never controversial. They were just corporate speak,” often time s to the point of being embarrassing.

But this time is different. These leaders are taking sides at the risk of alienating a good portion of their customers. Bravo for them. Maybe this tells us that faster change is on the horizon.

Sadly, and I know I am going to be in an unpopular minority here, no. All the talk about the bravery of employees literally risking their lives and/or the lives of their families doesn’t cover up the fact a $200 or $300 (before tax) bonus, while a huge number in aggregate, doesn’t make that much difference in any one individual employee’s life, and is certainly insufficient value for that life. Ditto with saying things like, “inclusion is in our corporate DNA.” Many companies have issued similar statements, most of which read as though they were written by the same diversity consulting firms. One notable exception was Ben & Jerry’s statement by the way, which passionately denounced 400 years of institutional racism in the strongest language. But even that is not enough. Where are these companies 52 weeks a year? How can you solve a problem in the streets from the safety of a boardroom or corporate auditorium? Where are the ongoing efforts to attack the symptoms of institutional racism — Jim Crow educational systems, poor… Read more »
7
|
0
-   Share

Yesterday I saw a true anomaly in the business world. A bold statement by Ben & Jerry’s titled, “We must dismantle white supremacy: silence is not an option.” The statement went beyond raising awareness and offering solidarity to demanding change with a specific four-prong strategy. Statements and actions by companies such as Ben & Jerry’s affirm the leadership role that businesses must take up to right wrongs and create a healthier marketplace for retailing to take place. As I’ve shared in the past, retailers are the intersection of business and society in the communities they serve. They can be leaders for change.

The retail giant knows its core audience is disproportionately affected by the pandemic, recession and racial inequality. Many Walmart workers and shoppers live in hard-hit neighborhoods and their livelihoods depend upon showing up to risky frontline work. Ignoring the socioeconomic reality of this diverse market would harm Walmart.

Walmart also has a history of working with diverse suppliers. This commitment helps consumers across a rainbow of ethnicities feel represented and loyal. The benefits of an inclusive supply chain include prosperity flowing into disadvantaged communities. That’s why Walmart has earned awards for its diversity leadership and why it stands out today.

In addition, Nike and Ben & Jerry’s prompt, direct communications differentiated their companies following the protests to honor George Floyd. These purpose-led brands know that speaking up can help them stand out by espousing principles like integrity and unity.

I’m thrilled by the willingness of retail leaders to stand up and assert what most people know — that every human being is equal and should be treated with dignity and respect. It’s disheartening, though, that they need to.

We should hope that corporations respond to these problems by re-embracing the role Johnson and Johnson outlined in their credo: Customers first; employees and communities; and finally investors.

This world has been upside down for far too long. Has Walmart taken a good first step? Only time will tell.

Braintrust
"Maybe this tells us that faster change is on the horizon."

"Retailers are the intersection of business and society in the communities they serve. They can be leaders for change."