Walmart’s Christmas wasn’t humbug, but it was less merry than expected 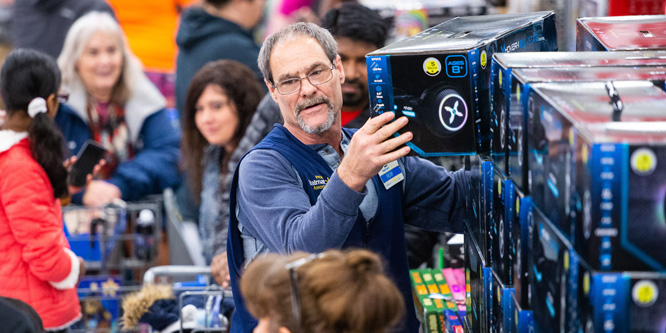 Walmart came up short for the Christmas selling season. The world’s largest retailer posted sales and earnings that were below Wall Street’s expectations, with the chain citing disappointing apparel and toy sales as factors.

Same-store sales in the U.S. were up 1.9 percent for the fourth quarter, below the 2.3 percent consensus among analysts. Walmart’s $1.38 earnings per share also fell short of the $1.43 anticipated by investors.

“The fourth quarter started and ended strong with solid sales growth through Cyber Monday and in January,” said Brett Biggs, Walmart Inc.’s chief financial officer in a statement. “In the few weeks before Christmas, we experienced some softness in a few general merchandise categories in our U.S. stores. However, Walmart U.S. grocery sales and eCommerce sales were strong throughout the quarter. Sam’s Club performed well, including solid results in eCommerce.”

Walmart’s e-commerce sales were up 35 percent during the period, down from a 41 percent increase in the third quarter. The retailer reported e-commerce growth of 37 percent for the year while forecasting a 30 percent gain in its fiscal 2021.

While Walmart has pointed to the success of its e-grocery operations, the same cannot be said for its overall e-commerce business, which has been shaken up over the past year as the retailer tries to stem its losses. Walmart sold off ModCloth, cut staff at Bonobos and Jet.com and closed Hayneedle’s headquarters in Omaha. Last week, the retailer announced it was discontinuing its Jetblack personal shopping text service on Feb. 21.

Walmart’s earnings report follows Target’s announcement that its 2019 holiday selling season sales were below its expectations. The chain reported same-store sales growth of 1.4 percent, well below the three to four percent range Target had forecast for itself.

The toy category, as at Walmart, also underperformed at Target, which experienced flat sales for the last two months of the year. Target posted a 19 percent increase in its digital sales in November and December.

DISCUSSION QUESTIONS: What do you make of Walmart’s good, not great, 2019 holiday sales performance? Do Walmart’s fourth quarter and Target’s November and December results offer clues into how these chains and the retail industry will fare in 2020?

Please practice The RetailWire Golden Rule when submitting your comments.
Braintrust
"If the world’s biggest retailer can miss holiday targets, any retailer can."

"Amazon has changed the game in fundamental ways and has built a lead that still leaves competitors like WMT and TGT following, along with most other breadline merchants."

"I fear that the fourth-quarter results from Target and Walmart may reflect systemic economic challenges more than execution issues at those two individual brands."

17 Comments on "Walmart’s Christmas wasn’t humbug, but it was less merry than expected"

Walmart’s results make it clear that it’s still a tough selling environment. Some of the investments Walmart made paid off, while others didn’t and that’s part of what is reflected in the numbers. Walmart’s bruising battle with Amazon doesn’t help their numbers either. The holiday 2019 season may well be a harbinger of what’s to come in 2020. With still so much uncertainty about tariffs, the U.S. election and coronavirus, there are plenty of headwinds on the horizon.

I fear that the fourth-quarter results from Target and Walmart may reflect systemic economic challenges more than execution issues at those two individual brands. Do they both have issues with inventory and assortments that may have hindered results? Sure. Do they both struggle to consistently deliver effective in-store experiences? Absolutely. However, I don’t believe those problems are at the heart of the issue. Rather, I fear that the well-documented disparity in our economy, combined with tariffs, the uncertainty surrounding the U.S. election and a shrinking middle class may be coming home to roost at stores like Target and Walmart. I expect they are in for a tough year this year, and likely beyond.

This wasn’t a great quarter for Walmart, but neither was it a disaster. The company more than held its own in e-commerce and continues to attract large numbers of consumers through its doors and to its site. The main problem is that growth was concentrated in low-margin segments such as e-commerce and grocery. This and a lackluster performance in higher-margin areas like apparel meant that operating income was down sharply. 2020 needs to be the year when Walmart doubles down on generating returns from its various investments and in which it bolsters poorly performing areas like clothing. Walmart has the firepower and determination to do this. It won’t be one of the losers in retail.

Perhaps it is not a matter of the results being low, but the expectations being too high. Population growth is 0.7 percent. Economic growth hovers around 2 percent (that is a good number). Online continues to grow in double digits. Why would one expect same-store-sales to grow 2.3 percent? It makes no sense.

I think that 1.9 percent is a pretty good performance for now and the future.

They mention video games and clothing sales as being soft this season. This was across the board at other retailers as well (except Amazon). While I know that food sales increased, it did not offset the losses in other categories. While online sales will continue to grow, it will be a hard sell because of all the uncertainty in the country — due to everything from political issues to healthcare issues that are affecting sales.

No one is defending the physical store turf better than Walmart, no one. Yet here we have the stark reality of the awesome power of what Amazon has created: a simple way to shop for anything without going anywhere — fast. That triple whammy, I’m afraid, is going to be telling for everyone sooner or later. This should not slow Walmart down though. Their actions have been powerful and innovative. The only addition to their plan, it looks like, is going to have to be fewer stores. Join the club.

The “meh” holiday performance of Walmart, Target and other brick-and-mortar retailers, I believe, is attributable to the short holiday season. With so many fewer days to shop, online became the best shopping platform, stealing store shopping trips. I’d not read this as a negative indicator for 2020.

This was a short holiday season which did not benefit anyone, but these results are reflective of the difficult selling environment many retailers are currently experiencing.

If Target’s results predicted anything it was that brick-and-mortar sales were not going to be as high as expected for the season. If we also accept the numbers reported by Mastercard and NRF for the holiday season, one might believe that e-commerce is where the real sales happened. That’s not hard to understand given the compressed duration of the holiday shopping season. When pressed for time consumers immediately think online rather than in-store. Shoppers view making a trip to the store as more time consuming than online and if the spirit of giving this season was to give things that could be easily obtained with minimum effort, then online was destined to win the day. I argue that 1.9 percent is a good number under these conditions and that we should not read this as a reason to worry about Walmart in 2020 (or Target for that matter). Retailers that further invest in upgrading the in-store experience and increasing the convenience factor in shopping with them are going to be the retail winners in 2020.… Read more »
5
|
0
-   Share

Walmart leads with its strengths in grocery, maximizing traffic and sales by offering convenience for busy holiday shoppers.

As for areas requiring investment, making Walmart an apparel destination will take time. Ensuring variety and in-stock items in toys (including Baby Yoda merchandise) will help Walmart achieve superior results during the 2020 holidays.

I made it a point to shop Walmart three times between Thanksgiving and Christmas. Each time I found the apparel assortments to be OK/good. But nothing memorable. Walmart assortments tend to be very straightforward. Classification- and item-driven. No real attempt at storytelling. Risk averse. That was an acceptable strategy for a couple of decades. But even Walmart at this point would benefit from a slightly higher level of novelty. If shopping Walmart has the same level of emotion, the same level of surprise and delight, as shopping on your phone, then the phone gradually takes over from the car keys.

Here’s a somewhat contrarian point of view. I don’t think the shortened holiday season had anything to do with it. After all, are you gonna tell the kids “Hey, sorry — fewer toys for you, the holiday season was six days shorter, so you get less.”? That’s just silly.

What’s NOT silly is the impact of Prime Day. Am I the only person in the world who thinks that people shopped on Prime Day for early Christmas gift buying? And to make matters worse, other retailers joined in.

Too much promotional activity makes for demand uncertainty, though it seems to level out over time. The fact that Amazon “bought” that business (and yes, I do think that’s what messed up their Q3 results, not “investments in next-day delivery” — that lives elsewhere, not in COGS) doesn’t help anyone, either.

And let’s not forget 11/11. Not a small deal and only going to get bigger. And right as Black Friday starts to heat up.

That having been said, I’ve always advised against over-interpreting single period comparisons, be it a week, a month or a quarter, and I’m not going to abandon that thought now. OTOH, people might want to get excited by the continued softness in manufacturing, which finds no end of excuse making (last month the explanation was partly that the weather was too warm … ugh!).

While there are all kinds of issues, both real, perceived and potentially real, WMT’s performance was definitely solid all things considered. However, from my perspective, the “miss” was attributed to one factor, as Paula Rosenblum appropriately suggests: Amazon.

I’d go a bit further than her cogent assessment suggesting that shopping at Amazon is still better than going to most brick-and-mortar stores, including WMT. Given the value of time and the opportunity cost of sitting in traffic and dealing with holiday check-out lines, it’s not hard to understand why Amazon’s record quarter came, at least to a degree, at WMT’s expense.

Amazon has changed the game in fundamental ways and has built a lead that still leaves competitors like WMT and TGT following, along with most other breadline merchants.

I think we all knew it was going to be a challenging holiday season. With that being said, I feel that Walmart weathered the storm pretty well. According to NRF, building materials and garden supply stores were up 2.1% & Furniture and home furnishings stores were up 0.6%. Most other categories were flat or negative.

In addition, Walmart EPS for the entire year average out to +17. Moreover, we cannot expect Walmart to continue to post +35% e-commerce growth in every quarter.

Walmart will address the scheduling issues, revamp the product assortments, and continue to nail down the grocery pickup and delivery programs.

The rush to judge earnings without taking the wider context that impacted the holiday season in 2019 is setting the wider retail community up to misjudge strategic decisions. Walmart’s consistent growth should not be ignored because of holiday season that was significantly limited by the calendar.

"Amazon has changed the game in fundamental ways and has built a lead that still leaves competitors like WMT and TGT following, along with most other breadline merchants."

"I fear that the fourth-quarter results from Target and Walmart may reflect systemic economic challenges more than execution issues at those two individual brands."