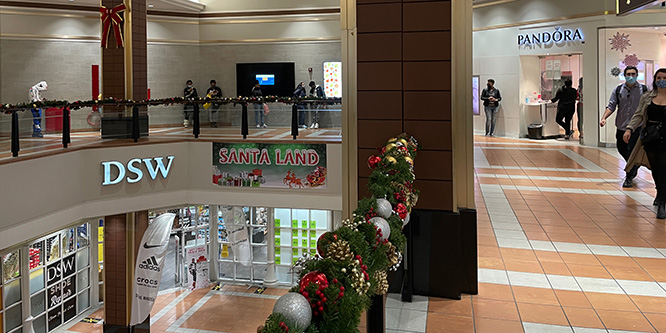 Traffic both in-store and online on Black Friday was subdued due to fewer doorbusters on the day and earlier holiday shopping in a season being increasingly dictated by supply chain challenges.

On the positive side, in-store traffic saw a strong recovery vs. last year when the event was constrained by limits on occupancy and even fewer in-store doorbusters. In-store traffic at U.S. brick-and-mortar retail stores in 2022 jumped 47.5 percent year-over-year, according to Sensormatic.

Traffic on Friday, however, was down 28.3 percent compared to 2019, the last pre-pandemic year. Sensormatic attributed the decline to holiday purchases that started for many consumers back in October.

Online spending on Black Friday failed to increase year-over-year for the first time since Adobe Analytics began tracking the figure in 2012, reaching only the low end of Adobe’s predicted range.

Vivek Pandya, lead analyst, Adobe Digital Insights, said, “Shoppers are being strategic in their gift shopping, buying much earlier in the season and being flexible about when they shop to make sure they get the best deals.”

Retailers are motivated to avoid promotions as tight inventories and higher costs for raw materials, freight and labor are already expected to lead to lower fourth-quarter profit margins for many. Investment bank Cowen determined Black Friday had the lowest level of clearance goods in five years or more.

Forrester Research analyst Sucharita Kodali told Reuters, “Even though the holiday season should be okay from a sales standpoint — because retailers are discounting less — the margins won’t necessarily be higher because of inflation.”

DISCUSSION QUESTIONS: Do you think the lighter Black Friday sales trend was most due to early holiday buys, skimpy deals or some other factor? What does Black Friday weekend indicate about how supply chain disruption may alter overall holiday results?

"We’ll see more spreading out over the next few years — supply chain issues or not."

34 Comments on "What caused the thin Black Friday traffic?"

There are so many factors impacting results that it’s hard to predict outcomes. Black Friday results were likely a combination of all of the things mentioned: early promotions, skimpy deals, inventory availability, etc. What does seem to be true, however, is that the supply chain concerns may have been overstated. I’m cautiously optimistic about the remainder of the holiday season, despite the new COVID-19 variant and the other headwinds.

Well, my friends who live in LA and Oregon will tell you it’s not particularly overstated.

Supply chain concerns as a generic statement are overstated. There is plenty of clothing in the supply chain, it is overstocked as always. But if you want an appliance, have fun. Certain toys, have fun. Electronics, again, have fun. But once you start looking at certain product categories they are not overstated.

That Black Friday, as an individual day, is becoming less significant isn’t anything new. Even before the pandemic, the event was becoming protracted and spending was spread across more and more days. That trend was accelerated this year thanks to earlier holiday shopping and many retailers offering deals from October onward. All that said, traffic was great compared to last year and every retailer I spoke to was very pleased with the results. What’s more, the success of this holiday season can’t be judged by one day alone and it still looks like we are on target for record growth and spending in retail.

It’s not either/or, it’s both and more! Greater acceptance of online shopping, supply chain concerns getting us to shop earlier, and a lack of doorbuster deals, all combined.

Omicron put a serious damper on everything.

I saw some increased traffic around malls this weekend, but we have been pummeled with bad news about the supply chain since the end of September and then comes the news of the next variant (that very little is known about). This year is probably a turning point where “normal” changes for the regular shopper.

With the national media pummeling consumers with doom-and-gloom messages about the supply chain, it’s no wonder that people started shopping early, not only to have something physical in hand to wrap and give but also to avoid the crowds now that a new COVID-19 strain is making the rounds. This is what happens when the holiday season has become 25 percent of the year (October/November/December) — shopping gets spread out so the traditional spikes aren’t there.

With retailers beginning holiday promotions earlier and earlier every year, Black Friday is becoming less impactful as a shopping bonanza. With supply chain issues top of mind, retailers started promotions earlier to spread out the demand. While many families love the tradition of physical shopping on the day after Thanksgiving, from a brick-and-mortar perspective, Black Friday will continue to be diluted with the continued increase in online shopping.

Black Friday was losing luster before the pandemic as it has become more of a kickoff to the holiday season than the big event itself. Consumers realize the deals and offers keep on coming throughout the holiday season and don’t have the urgency or excitement about Black Friday as they did in the past. Add to this trend the early start on the promotional season this year and that might explain weaker performance on Black Friday this year.

…because every day is Black Friday!

Seasonal and holiday spending occasions are becoming less and less relevant as retailers are discounting at other times throughout the year that work better for them. Consumers have wisened up to the fact that they can shop for any occasion whenever they want versus at one designated time during the year. Retailers have to promote along a timeline that can actually be supported with all the supply chain and staffing shortages, so this will likely set the tone for the future of holiday shopping.

I think we are dealing with a combination of early shopping, supply chain concerns and a big push to Cyber Monday and e-commerce sales and the shop local phenomenon. In the long run, this early shopping trend might further weaken the power of Black Friday as an annual event concentrated on one day. In the meantime, the publicity around supply chain issues and its effect on product availability has raised awareness among consumers, so the fear of no availability pushed buying back into early November. If you shop local you aren’t hampered by supply chain issues, as what you see is what you get. NRF is still predicting up to a 10 percent total sales increase this year, so let’s keep our fingers crossed.

No doubt, skimpy deals and early holiday shopping (encouraged by media attention on supply chain issues) have siphoned off some of the Black Friday sales. But there may be a larger social phenomenon at play, as consumer behavior and social re-calibration of careers, work, and the need for additional material accumulation may be dampening holiday sales enthusiasm. There are a lot of factors that are creating a pervasive sense of “social fatigue” and the traditional seasonal “shopping therapy” may not be providing its traditional palliative impact.

Black Friday, as a shopping day, is not what it used to be. Retailers started early holiday promotions to capture demand ahead of future uncertainties in supply chain flows and COVID-19 unpredictabilities. The surge in online shopping triggered over the past 18 months has also shifted consumer behavior.

From my local observations, there was abundant foot traffic and long queues to get into popular stores and brands. Doorbusters were definitely missing this year, but the current retailing landscape does not warrant them, and I still expect brick-and-mortar stores to show very healthy comps against 2019 levels.

We spent several hours at the Mall of America on Saturday: crowds were brisk and parking stalls were full. There was a stanchioned line to get into the Timberland store, Apple was full to the gills, and there were plenty of shopping bags being carried around. Perhaps not the busiest day I’ve seen there, but certainly a very strong one.

Supply chain chaos ensures holiday shopping is no longer about a single day; it now spans the fourth quarter.

All of the above. Throw in the fear of shortages, rampaging smash and dash thieves and crummy weather and you have the perfect storm. Besides, due to many recent factors like work from home, the customer is WAY more in tune with e-commerce shopping and given the above, anyone would have to ask, “why go out there?”

Amazon’s record performance could well have taken a toll on other retailers. It may also be that more shoppers are buying online or waiting for better deals to come.

Given the unfortunate timing of the latest COVID-19 variant it may be that this had an impact over the weekend.

Physical traffic isn’t as important as it used to be — just look at the constant parade of delivery trucks in neighborhoods. In addition, I’m predicting a noticeable rise in experiential gifts — movie tickets, Groupons, etc. Expect surprises!

This is a pattern that we expected when the bigger chains launched “Black Friday” deals in October. We asked if it would impact Black Friday traffic and deals in November. The BrainTrust’s conventional wisdom was that there would be less traffic and here we are. The question will be, will the second part of the holiday forecast happen? Would retailers be concerned about their decline in traffic and push promotions harder in December? I suspect traffic was off because more consumers are comfortable shopping from home. I also think the pandemic has caused a number of people to reassess their spending priorities.

First, convenience has dictated a new way to shop. Online is just easier. If you don’t have to try it on or look in the mirror, why visit the store?

I’m not sure supply chain is going to be a major disruption to the overall holiday results. Customers have a budget and they will spend it on what’s available. If they can’t get what they want they may wait, but who wants to have an envelope with an IOU under the Christmas tree or along side the Hanukkah menorah?

This is no surprise for a myriad of reasons. Black Friday numbers mean relatively little given the rebound, the strong consumer balance sheets and other shifts impacting consumer demand, starting with timing. A few observations on contributing factors:

The holiday season has just begun and there are many shopping days left to break the bank with sales.