What do consumers want when using AR or VR to shop? 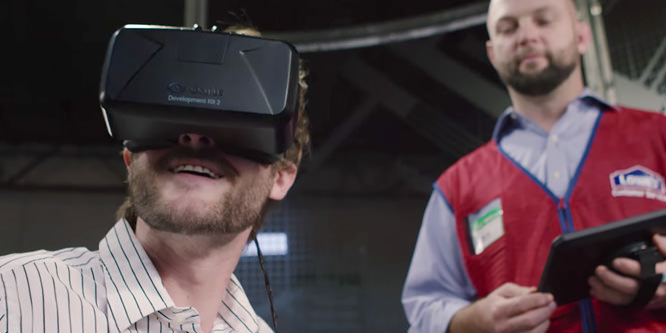 It no longer seems like a question of if but when retailers will begin using virtual reality (VR) and augmented reality (AR) technology to improve the customer experience and drive sales. Recently released research provides some insights into how consumers familiar with the tech want to use it for shopping.

“For retailers, the appeal is obvious,” said Rob Haslehurst, a managing director at L.E.K Consulting, which surveyed 1,000 early adopters for its research. “These technologies are a new way for retailers to do what customers want them to — create compelling shopping experiences and have rich communications with them.”

According to the survey’s finding, 80 percent want to use AR and VR technology to design rooms for their homes. This would involve them browsing virtual or physical showrooms where they can get information about furniture and décor and then use AR/VR to see what their rooms would look like with the items added. L.E.K. pointed to Lowe’s Holoroom and Wayfair’s VR showrooms as examples of retailers putting the technologies to work.

Seventy percent of early adopters want to be able to use AR and VR tech to try on clothing and related accessories and beauty products. As reported earlier this year, Gap is using its DressingRoom app to allows consumers to see how clothes might look on them before purchasing.

Also popular with 70 percent was the idea of using VR headsets to shop in a virtual store or making use of an artificial intelligence “virtual shopper” similar to Alexa or Siri to make purchases. Last year, eBay and the Australian chain, Myer, debuted the first virtual department store. The companies distributed 20,000 free cardboard viewers to increase participation.

L.E.K. says the study findings point to the need for retailers to begin exploring AR and VR tech if they haven’t done so already.

DISCUSSION QUESTIONS: Do you agree that retailers need to be investigating the use of virtual and/or augmented reality tech for their businesses now, if they haven’t already done so? Do you expect VR or AR applications to be more popular with consumers over the next five years?

Please practice The RetailWire Golden Rule when submitting your comments.
Braintrust
"Part of the illusion retailers have about digital integration is that they have to have every hot new toy that comes along. This is not so."

"AR and VR in-store retail applications are like movies. Great inspiration for visualizing furniture in my home and the like. But awful for clothes..."

"I believe VR is the next 3-D TV. It has almost no value in retail (or anywhere else, except gaming and maybe a deathbed)."

14 Comments on "What do consumers want when using AR or VR to shop?"

I can see the strongest benefits of AR and VR technology being the ability to have an idea of what the furniture will look like before I purchase it. Retailers today are being inundated with so many new technological “must-haves.” They have to carefully pick and choose the ones they feel will help them achieve sales. Each new technology impacts the in-store experience. It can make it better and it could also make it worse. So where is the technology needed? Why? How will it improve my sales? How could it hurt my business? These are the questions the retailers must answer before making decisions. Technology is not cheap and, with many retailers currently struggling just to survive, I’m not sure how many will be investing in as much technology as we’d like. Over the next five years we are going to see many new concepts, so it’s hard to predict where AR and VR will be, but I would suggest retailers keep their eye on them and see if it’s a right fit for… Read more »
1
|
0
-   Share

I believe VR is the next 3-D TV. It has almost no value in retail (or anywhere else, except gaming and maybe a deathbed).

AR is interesting but also seems kind of niche. Gosh, I really wish retailers would focus on actual retailing, with actual employees who know what they’re doing to create a better experience for customers. I really do.

Depends on the brand. The idea of Home Depot having VR to show you how your room would look in a certain color, or Best Buy having VR for gaming — that works. But for a retailer like Abercrombie or Urban Outfitters or even Apple? It doesn’t make sense.

Part of the illusion retailers have about digital retail integration is that they have to have every new toy that comes along because it’s hot. This is not so. For some brands, why would you want to put a customer in a fantasy world in your store that they can very well be in at home? Why not make your store a fantasy world (or at least so interesting that consumers want to be in it) and keep them conscious — you know, feeling your brand? Re: AR/VR, tread lightly. This is a brand decision.

Absolutely. It must be in the plans. But don’t confuse that with current technology. The first-mover advantage will be short lived because of technological drawbacks — but make no mistake about it. It’s coming.

If I were a retailer I would be investing in advancing the technology before I would put a penny into another brick-and-mortar venture.

Not in the least. We’ve been using VR as a marketing research tool for 25 years. Yes it’s very cool, but consider that there are fewer than 15 million headsets in the world, most of them crappy Google Cardboard. This survey of early adopters is heavily biased and should be ignored for the most part. Will VR become more popular? Sure it will. But not for years to come.

AR and VR are not the same and should be distinct in use case.

VR is nothing more than the “TV visor/goggles” technology of personal viewing of a 3-D video game and requires the use of a micro-joystick or controller to navigate while stationary.

AR has real and proven use case in mobile retailing from geo-navigating, 3D images like the Lego Store preview box and QR code augmentation of additional information in different languages.

Retailers need to leverage this technology to design experiences before building a particular design. While cost-effective during the design phase, retailers should integrate a measurement and analysis campaign to determine the efficacy of a physical implementation. While subjective, aesthetic decisions can be made through VR or AR, using the program to measure the commercial efficacy (are we selling more stuff?) of the retail environment and experience.

Where VR or AR is applied to solve problems or to inspire, it will be of benefit to retail. Ashley Furniture and IKEA are already using these technologies to help consumers visualize room layouts. Their trials have been well received.

I am far more skeptical about shopping in VR environments. For functional purchases like grocery, I can’t see the point: buying via a traditional website or app is far easier. For added value purchases, many will still want the experience and interaction of a physical environment. In this regard, VR/AR seem like technologies in search of a purpose.

As for the survey, interesting though it is, I take these things with a healthy pinch of salt. Consumers are not always great at predicting what they want.

I agree it is coming, but retailers do need to step back and consider their overall brand value and what merchandise they are selling. Is a VR experience really necessary to help a customer choose a new toothpaste at the supermarket? Unlikely. Will a customer want to use AR technology to see how a new place setting will look on their dining room table at home? Maybe. Trying on clothing? Possibly. Want to see how furniture will look in your home before buying? Yes.

It really depends on the product being sold. I don’t see VR having much applicability outside of home improvement stores, but I do see potential for AR in many retail segments. Retailers must ask themselves: What value does this bring to my shopper? How does it remove friction from the buying experience? And, will it increase conversions and result in more sales?

Otherwise it’s more technology for technology’s sake rather than for customer benefit.

AR and VR in-store retail applications are like movies. Great inspiration for visualizing furniture in my home and the like. But awful for clothes, since we actually wear clothes on our bodies. Seeing an AR/VR view of what a dress looks like on a shopper, in a mirror at Gap, is akin to holding the dress up to oneself and looking in the mirror. A gimmick. How many early “Virtual” technologies are still around? For instance, remember “My Virtual Model” failed … because when it comes to apparel, an individual person needs to find out if they like how an individual garment fits, looks and feels on their body. That is why apparel, the largest category of online sales, still sees conversion rates of around 3% since 1995.

Creating great customer experiences doesn’t mean you have to have a flashy tech experience. A great customer experience is one that enhances the customer’s shopping journey. Like Starbucks and Chick-fil-A who have apps that send the customer to the front of the line. If you are a DIY store, then augmented reality might be a good way to show the customer what the room will look like when finished, but is AR good for every retailer? No. Retail doesn’t need to jump on every shiny new toy. They need to figure out what their customers want and need from them and find a way to delight and simplify their lives. For my 2 cents.

There are definitely opportunities for AR and VR in retail, but not for every company or transaction. I’m a firm believer in retailers not just adding in technology for the sake of it. With all new developments like this, they need to understand what it can do and then see how that applies to their business — if it has no real benefit to customers, then it’s not a worthwhile investment. Being able to see what a new piece of furniture or kitchen will look like in your home has value, being able to walk around a supermarket in VR doesn’t.

This is definitely a discussion that needs to be had by vertical. As Cate says, if it’s not adding value it’s not worth it.

There is no killer app for AR and VR, only context and use cases. Instead of starting with “what is the cool technology,” let’s start with “what customer problem can this technology address whether they can see it now or not.” The cost of investment in AR and VR is not trivial, a retailer cannot spend more money fixing the problem than the problem itself.

Braintrust
"Part of the illusion retailers have about digital integration is that they have to have every hot new toy that comes along. This is not so."

"AR and VR in-store retail applications are like movies. Great inspiration for visualizing furniture in my home and the like. But awful for clothes..."

"I believe VR is the next 3-D TV. It has almost no value in retail (or anywhere else, except gaming and maybe a deathbed)."