What would adding smell to virtual reality tech mean to retail? 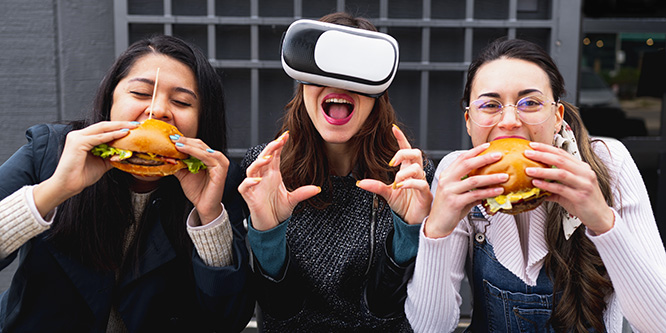 Demonstrating the potential of adding smell to virtual reality (VR), researchers led by Stockholm University recently created a “wine tasting game” in which the user smells wine in a virtual wine cellar and gets points if their guess on aromas in each wine is correct.

The researchers hope their open-source technology can not only elevate game development, but expand smell-VR technology to other areas, such as commercial applications like retail.

Adding scent to virtual worlds has been explored since soon after the first virtual reality headsets arrived in the nineties, but a number of startups are recently drawing attention for experimenting with the technology. With the metaverse drawing skepticism, some feel virtual reality needs to move beyond only sight and sound.

“It’s critical that scent be [part of] metaverse development . . . or we’re completely limiting the potential,” Aaron Wisniewski, CEO at OVR Technology, a Vermont-based smell-VR tech start-up, recently told Fast Company. “Smell has this profound effect over who we are, how we feel, what we do, what we buy, who we love.”

Smells are believed to have a stronger link to memory and emotion than any of the other senses. According to a study reported by the Marketing Society, approximately 75 percent of all the emotions experienced are generated by what people smell rather than what they hear or see.

Recent studies have further linked the loss of smell due to COVID-19 to depression and anxiety.

To old-timers and some skeptics, infusing smell into VR recalls Smell-O-Vision, Hollywood’s failed attempt from the late 1950s to incorporate smells into films.

In a recent article for Wired, Jude Stewart, author of “Revelations in Air: A Guidebook to Smell,” writes that while smell-VR tech has become more “convincing,” challenges include limits on the number of smell cartridges per headset. He advises a go-slow approach.

Mr. Stewart wrote, “Inserting smells into VR can distract, overwhelm or repulse. But used sparingly, and designed to fit the right context and coordinated with the other senses, playing with smell — even distorting it — can render a strange world more human.”

DISCUSSION QUESTIONS: What would adding smell to virtual reality tech mean to retail? Does the metaverse need scent to succeed?

Please practice The RetailWire Golden Rule when submitting your comments.
Braintrust
"Candle companies, A&F, and many other concepts have understood the power of scent in stimulating shopper demand. VR will follow suit."

"...absolutely that will add much more realism, along with other components that will eventually include all of the senses. And retail IS a sensory experience."

"Let’s get real-time inventory right before we start getting excited about the world’s best lasagna that you can’t actually eat."

19 Comments on "What would adding smell to virtual reality tech mean to retail?"

Smell is a vital sense. However scents are also incredibly complex and I wonder, beyond the basics, how faithfully they can be reproduced. Quite honestly, outside some applications such as gaming, most of the metaverse looks like a joyless, pixelated video game. Until the metaverse moves beyond being a cheap facsimile of real life it will remain an irrelevance to the majority of consumers.

Jude Stewart is right. Smells are tough and can as easily take away from a VR experience as they add to it. Then there are all the delivery issues. But all that said a true “metaverse” – another buzzword I’m starting to gag on – experience would be fully immersive, and that means it would engage and involve all five senses. There is no “Metaverse,” just a series of proprietary platforms that don’t need smell, but if there is ever going to be “The Metaverse” as in a single location like there is “The Internet” it would probably need smells.

I smell something brewing! Adding scent to VR will be a win as long as users have the option to turn it on and off. Think back to the Cinnabon days at the malls where customers were lured from all areas to the kiosk to have a taste of that heavenly bun. Candle companies, A&F, and many other concepts have understood the power of scent in stimulating shopper demand. VR will follow suit.

I agree with the need to be able to turn it on and off. While lots of people like scents (hence candle and perfume popularity) many get headaches from them or just find them really off-putting. So giving consumers control will be key.

Walking by a candle store makes me gag. And therein lies the problem with smell. One person’s inhale is another person’s gag.

Ditto. Learned this one summer when we merchandised too many lavender promotion products near checkout lanes. It was either loved or hated. Ultimately had to stop because it caused too much division among our customers and team members.

Scent is in the nose of the beholder. We all perceive smells and tastes differently so a light floral scent to one person could smell like day old gym socks to another. This might trigger an initial visit to try it out as a novelty, but I can see it quickly becoming annoying. Like all things with the metaverse, it’s a little too “forced festive” in trying to make something seem more relevant than it really is.

I’ve always thought it would be cool if I could email a scent or a digital banner could deliver a scent (caution below). Adding smell seems like a natural evolution of a much more rich web experience, the web has been boring long enough!

As for what it could mean to retail, depends on how it’s integrated. If advertising companies just start loading scents in ads then it could become pretty annoying.

As for the metaverse, set that term aside, scent and touch will be integrated into the next-gen web for a much more rich experience. Long overdue but hopefully cost and technical hurdles to scale will be overcome in the next 10-15 years.

Aroma is the final frontier of virtual reality, but I suspect we’re still light-years away from civilization here. For now, I think this modern version of Smell-O-Vision has a funny smell of “uncanny valley” all over it. The sense of smell is the most complex and difficult to capture and share. Let’s get real-time inventory right before we start getting excited about the world’s best lasagna that you can’t actually eat.

Also, the use of smell cartridges in VR headsets is reminding me how much I hate printers. If I’m low on the “indulgent treats” cartridge, will I not get to smell Cinnabon? Even worse, will my headset stop working entirely?

Scent can evoke an emotional response in ways that visual stimuli do not. I have an issue where I get motion sickness every time I try to watch a movie in a theater. As a result, just the smell of buttered popcorn makes me nauseated. I’m sure many consumers have their own issues with assorted smells. I’m not sure this is a space where I’d make a big investment, the experience may not be worth the effort.

A number of years ago (in 2015), Jim Beam launched Devil’s Cut bourbon, with an on-premise VR experience, partially because of the cross-over between their target and early tech adopters. To demonstrate the distilling process that made for a truly premium bourbon, bar patrons were offered VR headsets that took them on a roller coaster ride through the pipes of the still, through a flaming lid and into the barrel. By placing a shot of Devil’s Cut under their noses, the immersive experience included scent just as they were taking the head sets off, and then of course, taste. In situations where the actual product could not be available, it will be interesting to introduce virtual scent. But the mix of virtual and physical in the Devil’s Cut case seems more powerful.

Scent innovation with VR is really cool and I do think select applications for retailers could be powerful but I have to admit, with or without scent, I’m not sure the “metaverse” is something that’s going to succeed.

My first response is, “How cool is this!” AR and VR are going to continue to get better. Does the metaverse need scent to succeed? The short answer is NO. We’ve never had it before, but that doesn’t mean we shouldn’t have it. On the contrary, it makes the virtual reality experience even more real. I can’t wait to see where we are with this in five years.

As long as consumers can opt-in and understand that the technology will be imperfect at first, it will be a boon for foodie, natural and high-touch scent brands. If executed well, it could be part of a well thought out promotion and/product launch. PSL smell anyone?

I’m continually amazed at many who doubt that the Metaverse is a real thing or that it will “succeed” — it’s already here and quite engaging, if you’ve tried looking beyond Meta’s Horizon Worlds. As far as factoring scent into the equation, absolutely that will add much more realism, along with other components that will eventually include all of the senses. And retail IS a sensory experience.

The danger with adding smell is that humans are extremely aware of slight variations. VR doesn’t replicate reality very well (avatars often don’t even have legs). How can we believe smell and its subtleties can be well captured?

Might make some sense for a food or fragrance retailer … I can’t see it for, say, clothing (or most anyone else)
I don’t see much danger here, other than people wasting their time and energy on something with no application to their product lines.

We’ve played with this idea for over 29 years of doing VR marketing research. It will only be an expensive distraction. The Metaverse does not need scent and VR for retailing is decades off — it doesn’t add enough to the shopping experience to make the costs worthwhile.

Interesting thought and one I have not come across before.

Given how much smell is used in retail stores — pumping smell of freshly baked bread or chocolate in chocolate stores are well known — this seems like it should have benefits.

With metaverse environments, people are seeking immersion and that means it needs to apply to as many senses as possible. Haptic technology has been in discussion for a while, so why not smell?

Braintrust
"Candle companies, A&F, and many other concepts have understood the power of scent in stimulating shopper demand. VR will follow suit."

"...absolutely that will add much more realism, along with other components that will eventually include all of the senses. And retail IS a sensory experience."

"Let’s get real-time inventory right before we start getting excited about the world’s best lasagna that you can’t actually eat."