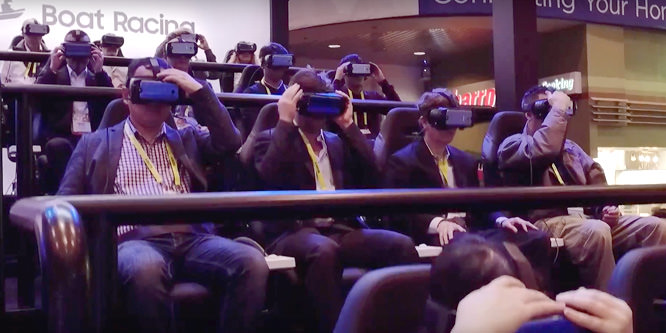 Although arriving with great fanfare, virtual reality (VR) headsets disappointed for a variety of reasons in 2016 and appear far from going mainstream.

Among the continued challenges are that Facebook-owned Oculus Rift, HTC’s Vive and Sony’s PlayStation VR all retail above $400 and require costly computers to run. They remain bulky to use, can lead to motion sickness and lack must-have content. With all the hype, consumers perhaps had unrealistic expectations and many aren’t comfortable losing their sense of the physical world around them.

At CES 2017, 71 vendors offered consumer hardware for virtual reality/augmented reality/mixed reality experiences, up 48 percent from the prior year. But the tech blogging community was surprised that the VR experiences offered from those vendors at the show failed to leap forward in the same trajectory as smartphones.

The Samsung Gear VR, also made by Facebook’s Oculus, is gaining some traction because it is cheaper at $100 and accessible to all smartphones, but lower resolution limits the experience.

Many believe VR is entering a “trough of disillusionment.” The predictions that the technology would transform video gaming and movie viewing, replace smartphones and change how computers work are now being met with more realistic expectations that should lead to a slower build toward success.

Some see a smaller slowdown while others see a shakeout. Wrote Tom Garner for The Independent, “The big question splitting these opinions is whether the consumer reaction to the VR games and applications currently being released will be the wrath of disillusionment or the mercy of patience.”

With the popularity of Pokemon Go, augmented reality is being looked at by some as the bigger near- and long-term opportunity.

DISCUSSION QUESTIONS: Do you see minor or major hurdles facing the adoption of virtual reality in the consumer market? Which are the most problematic?

"The greatest single barrier to mainstream adoption will be the need for companies to create compelling content in many categories and genres."

"VR removes you from reality. Its phony world is disorienting and in the end it is not the immersive holodeck many have touted."

I believe this is going to take time to embed into the consumer culture. Specific applications will benefit from VR. For example, when pre-selling a new real estate venture to allow prospects to virtually walk through the building. Gaming obviously will benefit with a core user base.

But until a trusted brand emerges that can build awareness of VR, I think it will be a slow growth and focused on niche markets. Additionally, this technology is going to change so rapidly that users are concerned with purchasing something that will be outdated in less than a year.

VR removes you from reality. Its phony world is disorienting and in the end it is not the immersive holodeck many have touted. Much like a GAF Viewmaster, it’s interesting to say you could “virtually” be in a store but you can’t. And with a learning curve and meh response, there’ll have to be a lot of small wins to make it a must-have.

VR headsets are too expensive and there is not enough quality content to propel them into the mainstream. They may get there eventually, but it’s going to take time.

Didn’t people say that about televisions in 1948?

Price is still a huge hurdle, especially for a device that doesn’t have a mainstream application and is not seen as a must-have. Generally speaking most consumers don’t know what practical benefit they’ll get from virtual reality, let alone why they should spend hundreds of dollars for it. Until the technology can be affordably and elegantly integrated with items most consumers already use (iPhones), and demonstrates obvious benefits, it won’t be widely adopted.

There at least four major “C” obstacles that VR must overcome to achieve widespread adoption by mainstream consumers:

VR technology will get better, cheaper and more mobile. The greatest single barrier to mainstream adoption will be the need for companies to create compelling content in many categories and genres.

This is an area I know fairly well, so at the outset let me note that the recent fascination with VR and AR is the third major attempt in 30 years to crack the mainstream market. So, as to hurdles, I’d say the primary one is content in terms of range, quality and availability and, outside of gamers, that leads to boredom. There really isn’t enough content yet to make a market. Then there are the hardware issues — too many choices, dueling platforms, cost, portability and, depending on what you are using, “latency” or VR-induced nausea in adults. Then there is the fact that the most promising applications — medicine, industrial training, team sports and the military — don’t yet have consumer market faces. I suspect that all these stars have to align to make a market and that is what has not happened in the past, or to date in the present. It doesn’t do you any good to develop content if the hardware makes you sick after 15 minutes. And it makes… Read more »
1
|
0
-   Share

The hype came before VR was ready for prime time. Creating content at all is challenging from a software perspective, determining how much space is necessary for use is challenging, a format for how VR can be used effectively for business has not been established and there is no standard for software or hardware because the issues are still being resolved. The opportunity still exists for VR to have a major impact, but a lot of issues need to be resolved.

What I’ve learned through many tech meetups and beta testing smart glasses, AR and VR is that consumer adaption to technology is a very personal journey that will continue to grow highly customized.

I see adaption to VR mostly in gaming and entertainment. Within gaming, consumers will use what they are comfortable with, whether it is a smartphone tucked into a VR viewer or the full Oculus headset. Consumers will watch movies, explore new online communities such as The SoulKeeper and engage in personal experiences in custom built environments such as The Void (which is now branded as “Hyper Reality.”)

Educating consumers on VR is an important aspect of adaption and I’m pleased that Facebook chose pop-ups as a path to discovery in malls and airports over the holidays.

We play with this everyday in our shopping research. Is it ready to be more useful? Not yet – but that time is coming soon as latency and resolution get closer to real.

Forget the technical aspects. Meaghan Brophy (the featured commenter) has it right when she says: “Generally speaking most consumers don’t know what practical benefit they’ll get from virtual reality, let alone why they should spend hundreds of dollars for it. Until the technology can be affordably and elegantly integrated with items most consumers already use (iPhones), and demonstrates obvious benefits, it won’t be widely adopted.”

Seldom does an author do as good a job as Tom did in answering his own question: everything from high cost to motion sickness (!).
Drawing an analogy to 3D movies in the ’50s, I would guess “bulkiness” is the biggest drawback, since it seems endemic to the technology … or maybe we’ve just reached the tipping point in how acceptable it is to withdraw from the world for entertainment purposes.

Tom hit all of VR’s problems right on the head. Their current status as a bulky and wired luxury item does not fit in well with the convenience of modern consumer devices. Once VR technology catches up and finds its niche where consumers can see it fulfilling a need that current devices cannot, then it will fully blossom.

And to quickly touch upon the popularity of Pokémon Go as an augmented reality, the app itself was mostly popular due to the fame and nostalgia linked to the franchise. Looking at the current state of the app, you can clearly see it was a fad that has faded away with the rest of 2016.

On this subject, Robert Scoble, a Silicon Valley insider and blogger reported from CES that a Zeiss employee allegedly confirmed that Apple and German company Carl Zeiss AG are working together on a pair of augmented reality smart glasses that could be announced as soon as this year. Scoble said that from what he heard, the glasses will be part of the next release of the iPhone. The following quote can be found in this link.

“If Apple’s patent filing from last June is any indication, we could be getting a flexible, AMOLED-driven translucent screen that wraps around the user’s head. Alternatively, the patent includes a process which would allow a lens to deform and then return to its original shape. That means we may even see eye glass frames that will accept modified lenses that could popped in and out as needed without damaging the transparent AMOLED display.”

Cost. Infrastructure. Headset form factor. Distracting models and rudimentary effects. Motion sickness. Not a seamless experience. Lack of insights on a positive impact on the business case. Lack of integration with the product catalog. Theft of devices. Complexity of technology on a retail floor for retail associates to manage.

It is an add-on to the shopping experience now, but not a driver yet due to some of these reasons.

In some of the larger retailers that have experimented with the model, some have actually found it disruptive to the path to purchase, to the detriment of sales and are backing way from VR temporarily. Many are moving towards AR as the option for now until the technology matures.

"The greatest single barrier to mainstream adoption will be the need for companies to create compelling content in many categories and genres."

"VR removes you from reality. Its phony world is disorienting and in the end it is not the immersive holodeck many have touted."