When Harry’s met Target and then Walmart 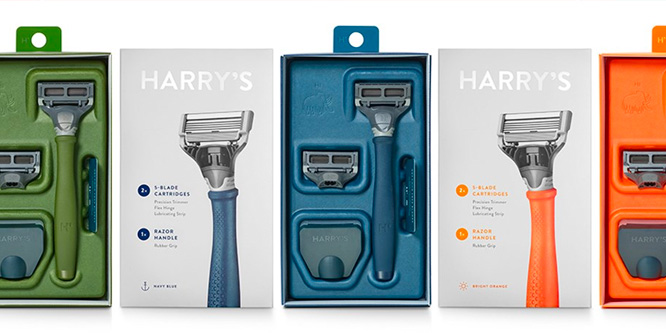 When Harry’s and Target announced the deal that brought the shaving product’s brand into the retailer’s stores, it was positioned as a meeting of kindred spirits. It appears, nearly two years later, that Harry’s has met yet another friend with a report that the brand’s products will be rolled out in 2,200 Walmart stores in the U.S. on May 21.

Harry’s, which started out as an online brand in 2013, began selling on Target’s shelves in August 2016. The move was seen by many as a means for Harry’s to better compete with its rival, Dollar Shave Club. Target allocated four-feet of shelf space for Harry’s along with end-caps in many stores as the retailer sought to drive foot traffic, particularly among younger consumers.

It is not clear what the display and promotional plan will be for Harry’s products in Walmart. The company has created an exclusive “Truman-style razor in a surf-blue color similar to Walmart’s logo,” according to Bloomberg. As with Target, the deal is expected to help Walmart attract the younger consumers, particularly Millennials, who are the primary purchasers of Harry’s products.

At the time of the Target deal, Harry’s co-CEO Andy Katz-Mayfield said his visits with the retailer’s management led him to realize how much the two companies held in common.

“Our brands share many of the same values,” Mr. Katz-Mayfield said at the time. “For example, we both appreciate exceptional design, we’re focused on offering high-quality, affordable products and we always try to put customers first.”

DISCUSSION QUESTIONS: How will making Harry’s products available in Walmart affect Target’s business with the brand? Will expanding distribution of Harry’s to Walmart reflect on the brand’s identity in a different way?

Please practice The RetailWire Golden Rule when submitting your comments.
Braintrust
"To me, the biggest take-away is the value of store-based retail. Harry’s wants to grow. For 99.9% of brands, that means a terrestrial presence."

"I don’t think this will have a massive impact on Target or Walmart, but certainly will for Harry’s."

"This is an example of new company making old mistakes. Going for today’s sales while not thinking about tomorrow."

15 Comments on "When Harry’s met Target and then Walmart"

Target was a very good fit for Harry’s to enter retail. But moving the brand into Walmart will devalue the brand. Obviously, they need to push the volume through their factory and this will help. But the brand has lost its identity with this move.

I’m not sure there’s that much customer overlap with the two brands.

To me, the biggest take-away is the value of store-based retail. Harry’s wants to grow. For 99.9% of brands, that means a terrestrial presence. I expect they’ll end up in other places as well.

Many brands go through this transition to Target and then Walmart. Harry’s, like other brands, is doing this to expand awareness and trial through distribution expansion. Because Harry’s is designing a package that is unique to Walmart and not the same as Target, it will likely expand their revenue, and Target will see very little cannibalization of their business. By offering their product broadly, Harry’s can dilute their brand’s identity to quality by entering Walmart which is known for low price.

Harry’s has developed products closer to the Target image. Placing the product in Walmart helps Walmart put pressure on Gillette, but downgrades Harry’s image. Harry’s should have developed a private label for Walmart and not demoted its image. Target should contact Dollar Save Club to develop a private label line for them. This is an example of new company making old mistakes. Going for today’s sales while not thinking about tomorrow.

This looks more like a line extension than additional shelf positioning to me. Consumers may recognize the Harry’s name, but the difference in product color and design in each major chain will result in purchase based on feature and price. More shelf space for Harry’s — good for them.

The lure of a huge short-term volume hit mortally (I predict) wounds another brand. Harry’s is in the process of going from an “it brand” for Millennials to another run of the mill price brand available everywhere. Better to tie themselves to their online “ship’s mast” like Odysseus and avoid the siren’s song of mass distribution.

I’m of two moods here. On the one hand it is easy to say that the Target and Walmart customer base don’t overlap that much so the impact will be minimal. I’d love to see the data. But, let’s assume that’s true for a moment. Will being in Walmart devalue the Harry’s brand? Depends on what brand values you are looking at. If Harry’s “means” great design and lifestyle in Target, it can still stand for practical value at Walmart. Those brand concepts aren’t inherently in conflict. So, I think it is really a matter of careful brand stewardship. Practical, affordable design offering great performance and good value ought to appeal to both retailers’ customer base.

Brand management is tricky, isn’t it? If you’re a mass market, price conscious brand, then Walmart is a great place. Target isn’t exactly upscale either, but it is a bit more “up.” Making the break from somewhat exclusive to mass market is likely to cost some customers who move on, but will attract a lot more with the increased distribution, at likely a lower margin. Target will lose some sales, and the brand will lose some luster. Harry’s will see substantial growth.

Will Harry’s offer the same products in both stores? Offering older models at value prices at Walmart would fit Walmart’s model and allow younger consumers to get in the market at a good price. Offering new or innovative models at Target would allow Target to continue its fashion approach. Offering the same products at both stores works well if younger consumers frequent one store or the other.

What’s the big deal here? I think breaking into retail with Target was a smart move for Harry’s. I think moving in to Walmart is an equally good move. After all, there must be hundreds of brands, especially toiletries, you can buy in either store. No one is making a big deal out of Gillette selling razor blades in both stores, are they?

Online-only brands cannot be profitable without physical presence. Harry’s is smart to expand its footprint.

So digital-first Harry’s is pursuing mass distribution in physical stores. Perhaps the brand caretakers have discovered the scale limitations of the online subscription model? Perhaps there’s some envy of last year’s acquisition of rival Dollar Shave Club by Unilever?

It’s clear that there is a yawning opening for a second major men’s shaving brand in the mass market. Gillette had all but cornered the U.S. market and had driven up the price points in the process — until it announced price cuts averaging 12% last year. The major impetus behind the move? Disruption by Dollar Shave Club and Harry’s.

Harry’s has some interesting options when it comes to product and design. It could choose to ship banner-specific models to major accounts — “designer” style to Target; no-frills to Walmart; a middle-of-the-road version to chain drug. It could even reserve a super-premium version for its online subscribers, barbershops, and salons.

Handled right, the Harry’s brand has potential to force Gillette to react again and attract its share of financial suitors.

I signed my husband up for a Dollar Shave Club membership two years ago and the little packages arrive each month. It’s easy, economical and it’s one less thing to worry about.

It’s smart for Harry’s to offer product in physical locations, in addition to its subscription service, but it does take away from its exclusivity. Adding it to Walmart makes it just another brand.

I don’t think this will have a massive impact on Target or Walmart, but certainly will for Harry’s. Target has done a great job testing and bringing in new brands like Harry’s, Cora and others. This move to Walmart gives Harry’s the ability to reach an entire new customer that I don’t think they spent much time targeting. No one goes to Target specifically for a Harry’s or any other branded razor. It is in some way an informed impulse purchase when you either don’t want to buy new expensive razors or just want to try something new.

A brand’s identity especially a more digitally native brand is much more than what retail channels they are sold in. I can’t really see an existing Harry’s customer switching razors because it is sold in Walmart or choosing not to test it either direct through Harry’s or at Target because they are sold at Walmart.

Much ado about nothing. This is not such a status product among trend-setting Millennials that a push into Walmart will affect existing consumers one way or another. Great move for distribution and leveraging production infrastructure for Harry’s. Further pressure on Gillette, and good news for commodity purchasing for consumers.

Braintrust
"To me, the biggest take-away is the value of store-based retail. Harry’s wants to grow. For 99.9% of brands, that means a terrestrial presence."

"I don’t think this will have a massive impact on Target or Walmart, but certainly will for Harry’s."

"This is an example of new company making old mistakes. Going for today’s sales while not thinking about tomorrow."