Will Target and Harry’s make for a perfect retail partnership? 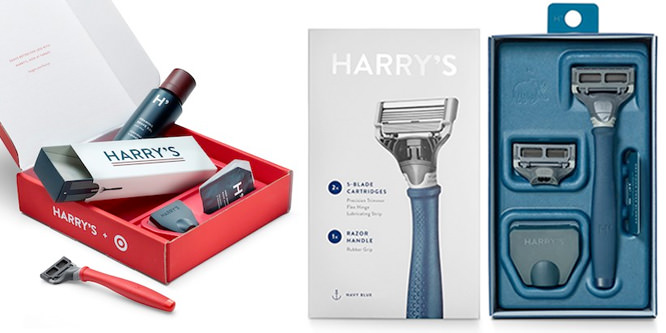 If you can’t beat ‘em, sell their products. That appears to be at least partially the case with the news that Target is teaming up with Harry’s, the shaving products subscription service, to sell its products in the chain’s stores and on Target.com.

Target, which first began offering an online subscription service for baby products in 2013 and later expanded to other categories including grocery, HBC, household, home & office and pet, believes it is perfectly aligned with Harry’s for the partnership. The news release to announce the venture pointed to the similarity between the taglines of the two companies. Harry’s is “A great shave at a fair price” while Target boasts “Expect More. Pay Less.”

“We started talking to Target about working together after we visited its headquarters for Design Week about two years ago and realized how much we have in common,” said Harry’s co-CEO, Andy Katz-Mayfield. “We have a great deal of confidence in their commitment to delivering a great experience to their guests and to Harry’s customers, and our brands share many of the same values. For example, we both appreciate exceptional design, we’re focused on offering high-quality, affordable products and we always try to put customers first.”

The plan is for Target to carry a selection of the most popular products sold by Harry’s. REDcard members will get an additional five percent off their subscriptions along with free shipping on every order.

In Target’s stores, according to Mashable, Harry’s will get four feet of shelf space next to Gillette, displaying a selection of products including razors, shaving cream, face wash and other items. Harry’s products will go on sale on Target’s website on Aug. 10 and in its stores on Aug. 21.

“The men’s grooming industry is changing quickly. This evolution is largely driven by the way men are shopping these days. They’re extremely selective, buying online more than ever before, and also care more about expressing their personal style than past generations,” said John Butcher, senior vice president of beauty and personal care for Target. “Harry’s will help us build affinity with these guests, round out our existing men’s shaving assortment and further differentiate Target in this competitive space.”

DISCUSSION QUESTIONS: What do you see as the value of the Target/Harry’s deal for each company? What does this suggest for future deals in the retail and CPG space?

Please practice The RetailWire Golden Rule when submitting your comments.
Braintrust
"Carrying Harry's brings a hipness to Target while expanding the reach of consumers who might want to give Harry's a try."

9 Comments on "Will Target and Harry’s make for a perfect retail partnership?"

Both brands have a cheap-chic message, so that’s a good fit. Carrying Harry’s brings a hipness to Target while expanding the reach of consumers who might want to give Harry’s a try. This seems to be a potentially winning situation for both companies.

This is not surprising. This type of acquisition/merger is a trend that we will see continue for some time until consolidation has matured. Companies are purchasing the skill or specialty that they did not have and that they want. In the case of Dollar Shave Club/Unilever and Harry’s/Target, it is the ability to sell product by subscription. It is like the build vs. buy decision, but applied to a particular method of distribution. The difference between the two cases is that, in the the Shave Club deal, the purchaser is not a retailer and that will hurt retailers while, in the Harry’s case, the purchaser is a retailer and may only hurt Target’s competitors, which is how one plays the game to win.

I won’t subscribe to anything anymore. The “auto-ship” scheme is another Trojan Horse (like gift cards and multi-level marketing products) that takes advantage of customers under the guise of helping. In this case, however, and depending on the price, I might try Harry’s since I can get it off the shelf at Target.

The price of razors is crazy with profit margins second only to mattresses. And one of the discussions in my house is why razors for women cost at least 15 percent more than men’s according to Business Insider. “The Pink Tax” at work. Still, watch for a Harriet’s version soon! Same thing, pink plastic, higher cost.

I’m a Harry’s subscriber and yeah, they’re a brand match all right. Good fit. Big plus for Harry’s to get that kind of exposure and for those of us who know Harry’s, this deal also takes the perception of Target up a notch or two. Win-win.

I still use a razor to shave on almost a daily basis. I have done it for more years than I want to think about. Most of those years I have used Gillette. Recently I decided to switch to one of the “less expensive blades” advertised to use, throw out and have replenished on a monthly basis. I admit the shave was good the first and second time. The quality and comfort decreased after that. So I compared the price and longevity of both; and found my old brand was less expensive.

That said, I think Target has made a good decision to put these products on a shelf close to Gillette. David vs. Goliath. The new blades are going to be something we will buy and try. Some will like them, others not so much. But the bottom line is both companies’ sales will be better as a result.

Um … am I missing something here? I get the whole brand resonance point (cheap chic), but Harry’s is a subscription service. Its appeal is more about delivery and convenience cool than it is about product hipness. So from Harry’s point of view maybe some people try the product and opt for a subscription. But remind me again what this does for Target in the long run?

This works well for both brands. Target typically indexes lower among men and carrying Harry’s razors provides a new reason to consider Target over Walmart, Meijer, Walgreen, CVS and other retailers. For Harry’s it provides a well established brick-and-mortar retailer with over 1700 locations to dramatically expand their market exposure.

Longer-term, for Target, being a distribution extension for other compatible, well known online-only brands could be a bright spot for them as they struggle somewhat in their re-positioning efforts.

This is a smart and totally win-win deal for both Target and Harry’s. Target gets to protect and even grow its men’s grooming business with a brand that will grow share of wallet among customers and expand reach. Harry’s gets incredible and on-brand retail distribution with a merchant that is among the leaders in balancing what’s good for the business and what’s good for customers (and what’s good for its suppliers).

The loser here is Gillette and also the other legacy brands in the category, though they are already on their way to losing share here to Harry’s and Dollar Shave Club.

Braintrust
"Carrying Harry's brings a hipness to Target while expanding the reach of consumers who might want to give Harry's a try."