Who will win the Sephora vs. Ulta beauty competition? 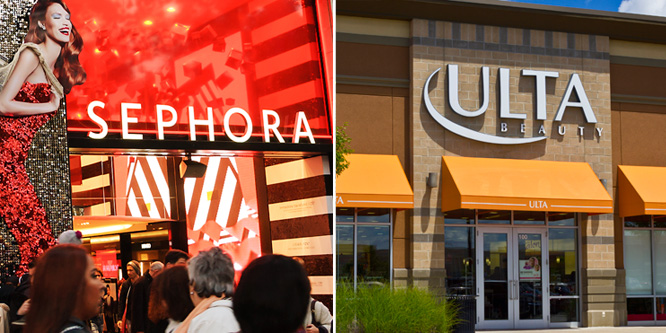 Sephora and Ulta Beauty have dominated beauty specialty for a while and appear destined for more head-to-head battles.

Sephora was founded in France in 1970, acquired by LVMH in 1997 and opened its first U.S. store in 1998. The company now has more than 460 standalone stores across North America, as well as another 660 inside J.C. Penney locations. Thirty-five are set to open in 2019.

The primary difference between the two is Sephora’s traditional focus on prestige beauty products only carried by department stores and Ulta’s on mass and professional hair care brands. Those lines, however, are blurring.

Sephora has brought in more lower end offerings through its private labels and introduction of lines such as ColourPop cosmetics. Ulta has gained access to labels such as Chanel, Nars and Shiseido; prestige now accounts for 55 percent of its mix.

Ulta’s 9.4 percent comp gain in the fourth quarter was particularly helped by securing an exclusive on Kylie Cosmetics, Kylie Jenner’s makeup line, that was previously only available online. Securing digital exclusives remains a priority. Ulta’s fans also call out its broader mix of high/low offerings as well as the discounts and free samples driving its rewards program.

For its part, Sephora still has a higher cachet that helps land more prestige exclusives as well as prime real estate, including a store soon to open at New York’s Hudson Yards. Deborah Weinswig, CEO of Coresight Research, last year told the Business of Fashion, “Sephora is much stronger than Ulta in consumer perception of its own brand.”

The two also face a number of newer competitors in the space, such as Glossier, Bluemercury and Amazon.

DISCUSSION QUESTIONS: Is Sephora or Ulta better positioned for growth in the beauty category? How would you access each chain’s strengths and weaknesses?

Please practice The RetailWire Golden Rule when submitting your comments.
Braintrust
"As a consumer who loves beauty goods, I'm going to win either way."

"Both brands have strong, yet very different, loyalty programs which are successful with their own target markets."

"Both retailers have done a great job of investing in technology and innovation, as well as being customer-centric."

15 Comments on "Who will win the Sephora vs. Ulta beauty competition?"

Beauty is a brand game and the Sephora brand currently has it. Beauty is also a trend space that changes almost overnight when key influencers like Kylie Jenner are involved. When it comes to loyalty, the Sephora program fulfills the modern consumer need for instant gratification. Ulta does, but not as well.

On paper, it looks like Ulta is innovating faster than Sephora right now. As a consumer who loves beauty goods, I’m going to win either way.

I’d like to see Ulta play in the mall and Sephora team up with a cooler retail brand like Anthropologie. Both brands are settling into rather mundane retail patterns. Lines are blurring because there is plenty of consumer appetite for mixing it up.

I think it’s emblematic of the problem in retail – there are two companies here, and two winners, because there’s really only room for two – one that caters to the high end, and one that caters to the low end. Sometimes that translates into “older” vs “younger” – Sephora is for me, and Ulta is for my daughter. But what’s most important in this dynamic is that there is no room to win in between the two. The middle is a very precarious place to live for brands, and beauty is a perfect example of how it ultimately plays out.

There’s clearly room for both Sephora and Ulta to continue their outstanding growth in the beauty and wellness space. Both brands are differentiated enough, with different customer segments that are positioned to grow over the next few years. However, with scale and growth comes the complexity of knowing your local market, keeping your offerings personalized, and staying connected with your customers across physical, digital and social channels.

Sephora has fueled their growth with their significant investments in omnichannel solutions, along with the digital platforms, and by providing personalized experiences. Ulta has achieved scale by offering beauty products and value pricing, but also by offering beauty services which Sephora does not.

Neither brand could afford to take their foot off the proverbial innovation gas pedal. Especially as the brand that touts “emotional commerce”, Glossier, is gaining momentum.

Brandon, you are right on the money with your Glossier comment!

Indeed Anne! Now is not the time to get too comfortable.

Both retailers are winners and cater to different market segments (although many customers shop both depending on the product they are seeking). Ulta’s beauty salon keeps the frequency of visit higher which will drive more profitable sales and consistent traffic. Sephora’s cutting edge brands and focus on artistry will continue to drive newness and innovative experiences. Both brands have strong, yet very different, loyalty programs which are successful with their own target markets. Sephora has higher online sales, reported around 30 percent of sales, whereas, Ulta is around 20 percent. However, the most staggering statistic that puts Ulta ahead is that 95 percent of transactions are from beauty Loyalty Club members who are spending on average $200 per year. Honestly, there is room for both in the U.S. market. Where is Blue Mercury?

I see two different customers for these retailers. Some of it has to do with location, in that the Ulta units tend to be in smaller, more off-site, even off-price locations, but most of it has to do with fashion. The Sephora customer seems less price oriented and more about the latest and greatest, and the Sephora associates (best in the biz IMO) go a long way to promote that and push customers towards newer product. Ulta, on the other hand, looks and feels more like the old warehouse, DIY model with less spent on payroll and build out and more on fundamentals like stocking the shelves. Their services help, but still aren’t on par with the rockin’ Sephora environment. As stated before, it’s a win-win for the customer regardless as sometimes you may just need basics and at other times, you’d like to get the latest info from a well informed associate. Tough NOT to be satisfied either way. Feels like there’s room for both to me, and room for more of both as… Read more »
0
|
-2
-   Share

Beauty is a category that seems to be on fire and doesn’t show signs of slowing down. Both retailers have done a great job of investing in technology and innovation, as well as being customer-centric. Sephora caters to a less-price sensitive customer and is best-in-class when it comes to omnichannel loyalty programs. Ulta has done a good job in leveraging less than premium real estate and nabbing some high profile exclusive partnerships to drive traffic. Both brands need to stay on their toes and bring their A game — Glossier is coming for them.

They are both positioned for growth. Sephora is expanding its high end service and products and Ulta is positioning its products for the lower price consumer. While each is trying to take share of the other’s consumers, they should focus in their traditional markets and grow. Sephora’s strengths are their customer service and ability to resolve stock-outs quickly. A weakness is their loyalty program which requires the consumer to purchase items before using points and the high cost of their products. Ulta has a great loyalty program but its stores suffer frequent stock-outs with a failing ability to fulfill the customer’s desired product.

This isn’t a zero-sum game and, at this stage, I don’t see one winning over the other. There is a lot of beauty market share that is yet to be ceded by other players like department stores, which both players can benefit from. Moreover, beauty is still one of the fastest growing retail sectors so there’s still a lot of organic growth that will fuel both companies.

By observation, it seems to me that Ulta is stronger with younger customers, as its inventories start at brands found in drug stores and it also sells hair tools (popular priced, with others that can be more expensive) and then moves up the branded ladder. However, they do attract customers of all ages with upscale labels. Overall, it seems like a strong position for future balanced growth.

Sephora storefronts are less visible. Their presence in J.C. Penney locations would seem to be a positive step, but the customer footprints in those stores scare me. Although, if you want to use your J.C. Penney’s charge card, there may be an opportunity there. The mix in Sephora defines an elevated customer profile, but my honest opinion is that Ulta seems more set for market penetration.

Both Sephora and Ulta are positioned for growth as they continue to extend their brands from both a product positioning and target audience perspective. Sephora is expanding to younger demographics and lower price point products and Ulta is doing the opposite.

Sephora has a strong brand reputation for premium quality products and personalized services and Ulta is known for its wide product selection at reasonable prices. There is room for both and they as they continue to compete for market share.

The other comments in the discussion have pretty much captured the core sentiment — there is plenty of room in the beauty market for both. The real challenge is for others to break in, whether it’s Blue Mercury, Amazon, or Glossier. Of those, at least Glossier is doing something markedly different and unique to get attention and drive foot traffic to their new stores. The question for them is how will they use stores in general to drive new customer growth.

Location is also an important play. While we talk about Sephora being a more urban brand, their mall presence and presence within JCPenney stores puts them close to Ulta stores in many areas. In fact, you could argue that those J.C. Penney stores are a potential risk for Sephora as it ties their fortunes to the success of J.C. Penney and their ability to keep stores open.

Never bet against LVMH. They have too many cards in their pocket.

Braintrust
"As a consumer who loves beauty goods, I'm going to win either way."

"Both brands have strong, yet very different, loyalty programs which are successful with their own target markets."

"Both retailers have done a great job of investing in technology and innovation, as well as being customer-centric."