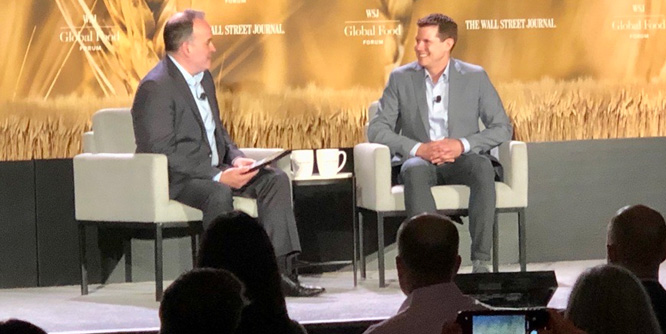 Speaking at The Wall Street Journal’s Global Food Forum, Jason Buechel said one of his goals as the next CEO of Whole Foods Market is “to reconnect to many parts of our heritage as a company.”

Mr. Buechel, who will replace Whole Foods’ co-founder John Mackey on Sept. 1, noted that there has been “just a lot of change within the company over the last five to six years” following Amazon.com’s 2017 acquisition. He particularly called out “distractions” over the last two years as the safety of associates and customers, as well as supply chain challenges, became a priority.

“One of my top goals is to reignite the connection to our higher purpose, mission and core values with our team members,” said Mr. Buechel. “We’ve been through a lot.”

Mr. Buechel, who has worked alongside Mr. Mackey as COO since 2019, said a major change under Amazon’s ownership has been investing aggressively in prices that he believes have attracted new customers and better positioned the chain for current inflationary pressures.

“Our price perception is in a better place now,” said Mr. Buechel. “And as we look at the broader market, we’re really proud of where we show up, especially on entry-level price points for high-quality products.”

Amazon has also helped Whole Foods embrace a “long-term vision” to support investments in areas such as price and supply chain as well as the chain’s broader mission of elevating quality and ethical standards in the grocery space. As a public company, quarterly growth and profit targets were often prioritized, but Amazon ownership has helped Whole Foods explore what they are “going to do in 10 years that’s going to change the world,” according to Mr. Buechel.

DISCUSSION QUESTIONS: What advice would you have for Jason Buechel as he prepares to take over as CEO of Whole Foods? What business strengths should be build on and what weaknesses need shoring up?

Please practice The RetailWire Golden Rule when submitting your comments.
Braintrust
"Whole Foods will need to make bold, visible moves to stand out from the crowd and de-Amazon its offering."

In my opinion, Whole Foods is a good retailer but it is a very long way from being a great retailer. While the company does a good job on areas like the health and provenance of food, it does a poorer job on range innovation, taste and experience. In a retailer like Wegmans I am blown away by the private label innovation, the excellence of the products, and the experience they create in-store. By contrast Whole Foods is pretty bland. To justify the higher costs – and let’s be honest here, Whole Foods is still high price even though they have done more with value tiers – Whole Foods needs to deliver far more than it presently does.

Advice: get spun-off from Amazon. The companies never were in the same businesses and the Whole Foods raison d’être has little or nothing to do with its parent.

I think returning to roots is an excellent idea. One of the first things that happened after Amazon bought the company was that they announced they were going to cut back on local offerings. Their brand is all about quality, local, organic and healthy. I do think a lot of that has been lost, and should be re-engaged. I also think it’s time to re-work their recipes for their hot tables and fresh counter. To be frank, they’re lousy cooks. The food has too many herbs and not enough flavor. It’s pretty awful. I buy from them less and less. I don’t love the implementation of self-checkout. I don’t get any sense that they have done this “for me.” They did it to save labor. It offends the WFM customer. I use it because they’ve eliminated express lines, but it’s so off-brand. And my opinions on “just walk out” (which has yet to happen) are well-known. If I wanted a job as a packer, check-out clerk and cashier, I’d get one. But calling that “frictionless”… Read more »
21
|
0
-   Share

I admire Mr. Buechel’s insight and his desire to connect with Whole Foods “heritage values.” I do wonder how that will work when those values conflict with Amazon’s business practices. Managing that is going to be really difficult to do I suspect. I would also point out that pre-Amazon Whole Foods was not really “killing it.” I think it’s admirable to want to focus on doing “good,” but at the same time they need to remember the issues they’ve had in the past and not repeat those.

Mr. Buechel is wise to double down on purpose-driven leadership in sustainability and wellness.

Inflation is the top risk, as even upscale shoppers may seek savings elsewhere. Continuing to invest in price perception and smooth omnichannel experiences will strengthen Whole Foods’ position.

Operational upgrades aside, Whole Foods has been missing the very elements that used to set it apart and that Mr. Beuchel outlined. Unfortunately for Whole Foods, food waste initiatives, ethics monitoring, plant-based pushes, and other actions have become table stakes for competing grocers in the meantime. Many of Whole Foods’ stores have also departed from the funky design elements and culture that differentiated the retailer in the highly-competitive grocery space. At this point, Whole Foods will need to make bold, visible moves to stand out from the crowd and de-Amazon its offering.

Reconnecting with the Whole Foods’ “higher purpose” can’t be done as long as Amazon holds the keys. After five years it’s clear that Amazon doesn’t really know what to do with Whole Foods – there is no overarching purpose or meaning apparent any longer. It’s little more than an Amazon locker that sells food.

I believe Mr. Bueschel is spot on with his assessment of Whole Foods and its future. I give a big “bravo” to his comment — explore what Whole Foods is “going to do in 10 years that’s going to change the world.” That type of thinking will surely give them a leg up in the future and we would be hard-pressed to name other retailers thinking the same way.

My only advice would be that talking is easy, walking is hard. It isn’t fair to judge a new executive’s potential based on the obligatory values babble that is apparently de rigueur for all incoming CEOs, but pandemics, recessions, and inflation aren’t “distractions” at least to folks earning less than six figures — like, say, Whole Foods retail workers. I’d also – as they say in England – like to know what reigniting “… the connection to our higher purpose, mission and core values with our team member,” is when it’s home. A little specificity would go a long way in terms of both short-term clarity and long-term accountability, especially when you are simultaneously talking about something as granular as lowering price points. And again, while I understand one must pay homage to the mothership, I can’t for the life of me make sense out of how being owned by Amazon is going to help Whole Foods figure out what it is “ … going to do in 10 years that’s going to change the… Read more »
4
|
0
-   Share

I like what Mr. Buechel is getting ready to do. He’s going back to what “brought them to the dance,” and recognizing there may be an opportunity to repeat some of what gave Whole Foods their original success. Today’s customers, more than ever before, want to align with a brand that stands for something. Our customer experience research found that 45 percent of American consumers believe it’s important that a company has a social cause that’s important to them.

If WFM can maintain its price perception AND revitalize the brand promise and purpose of WFM, they stand to win. The Amazon acquisition and COVID are certainly headwinds but the latter is true for all and the former provides an avenue for growth across the AMZN customer and Prime membership bases. WFM has an unrivaled number of assets to leverage and there should be fewer excuses going forward along with better performance and a better customer experience.

Am I allowed to lie through my teeth like this guy? We’ve been Whole Foods shoppers for 15 years, for one reason only: the organic products they carry. They do not have the best produce, they are not the only place we shop, they don’t have that unique of a selection, but they are a convenience to get a portion of our groceries. So Buechel can spin any stories that he wants, but it doesn’t make it so. A real exec would own up to the problems and not mildly brush them off with softball words like “distractions.” The RetailWire archives have many instances of me telling the truth about Whole Foods, from my experience. I doubt that I live in the one weak spot in their ecosystem. For third party items, SKU for SKU for years and even now, they are higher than competitors, 95 percent of the time. They struggle to keep many products on the shelves which may due to their foolish order to shelf policy, yet they are a part of… Read more »
5
|
0
-   Share

I did a price check in Florida with the same basket of groceries a few years ago, and Whole Foods beat three other regional brands. Their produce and prepared foods are still unique in many ways, too. Service? Whenever I’ve asked where something is, they always walk me right to the product, stopping whatever they were doing before. So, I think what WF will want to focus on is environmental and sustainability aspects, although I’m not even sure what, if anything, needs to be “fixed.”

While these statements are great to hear how Whole Foods will return to its roots to better serve customers, it falls flat because there isn’t any visible “big” thinking. Whole Foods has lost its distinctiveness with other competing grocery brands since its peak. Many other grocers have great organic produce, fresh ingredients, and healthful alternatives but most of them are doing that at a lower price point than Whole Foods. And as others here have pointed out, even their prepared foods just don’t cut it anymore. So why can’t Whole Foods go big? They are part of Amazon — shouldn’t they make a case to their mothership that they should be the platform for experimentation in shopper experience? They should elevate the service offering in store and provide something Amazon Fresh locations don’t to justify a higher price. Whether that’s from more local selections, better prepared foods, higher quality private labels, there are many options. Whole Foods should create its own model for meal kits based on the high-quality food they offer — create the… Read more »
0
|
0
-   Share

Perception is reality. Whole Foods will never be able to shake consumer awareness that it is attached to Amazon. This association completely distracts from an efforts made towards a high-purpose and will always negate efforts unless it’s separated in the future.

Braintrust
"Whole Foods will need to make bold, visible moves to stand out from the crowd and de-Amazon its offering."