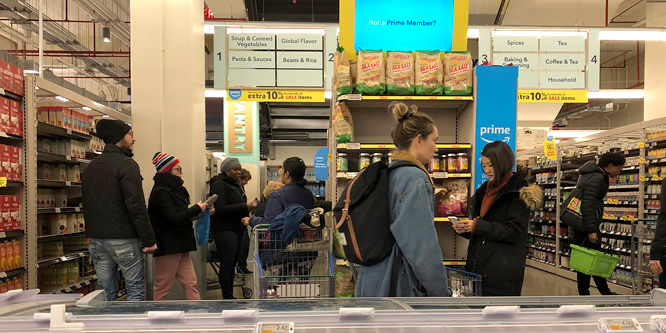 Through a special arrangement, presented here for discussion is a summary of a current article from the blog of LoyaltyOne. The article first appeared on Forbes.com.

Since acquiring Whole Foods in 2017, Amazon.com’s push to expand into grocery has in large part relied on converting Prime Members into Whole Foods shoppers.

Along with price cuts overall, Prime pickups have been added within Whole Foods stores and members have been offered two-hour Whole Foods delivery (free on orders over $35) and an additional 10 percent off sale items.

On April 3, Amazon announced another round of price cuts at Whole Foods along with “double the number of exclusive weekly Prime member deals and deeper discounts.”

Yet price reductions won’t be enough to convince Amazon Prime shoppers to venture into a Whole Foods for a few reasons:

Please practice The RetailWire Golden Rule when submitting your comments.
Braintrust
"The needs aren’t necessarily misaligned, it’s just that the grocery shopping needs of Prime members are being adequately met by other competitors."

The easy response is that 70% of Prime members are not near a convenient Whole Foods. So it is sort of a misrepresentative statistic. There are only 477 Whole Foods, and 116 of those stores are in California and Texas. So Whole Foods does not have the physical footprint to reach all of Prime Customers.

It would be interesting to see the statistic of Prime converts within 5 miles of a Whole Foods. That would be a relevant analysis.

There are already plenty of synergies between Amazon Prime members and loyal Whole Foods customers. The challenge has been to leverage the Whole Foods shopping experience to acquire additional Prime members. We are coming off the 2nd large scale Whole Foods announcement of increased Prime savings throughout the store.

However, while the price reductions are more prevalent through the produce section in the stores, it’s still not enough to increase the level of engagement Amazon expects. It’s high time for Amazon to consider a cross promotion loyalty strategy, that will extend beyond simply lowering prices.

Amazon Prime’s membership has its benefits, however gameification rules in the loyalty world. Perhaps, Amazon and Whole Foods could cultivate a greater following by driving a loyalty program that truly rewards the most loyal grocery shoppers, and turn those points into something meaningful, in the form of points and $, which could be used with Amazon or at Whole Foods.

While some of us have several Whole Foods to choose from (I have three within walking distance) whole swaths of the country have none at all. Add the fact that Whole Foods charges more than most other supermarkets. Given these, Whole Foods is (an important) niche player in American grocery retailing.

Price isn’t always why shoppers choose one store over another, but it seems to be Amazon’s push with Whole Foods. That bananas can brown on the way home thing is true for me. If I loved Whole Foods it would be worth the trip, but I find its brands and selection limiting.

People tend to fall in love with their grocery store. It’s just easier to shop when you like what the store offers and you know where everything is on the sales floor. If you don’t believe me ask grocery shoppers after a major floor move.

The needs aren’t necessarily misaligned, it’s just that the grocery shopping needs of Prime members are being adequately met by other competitors. This one made me go get another cup of coffee this morning. Our household is a prime example (pun intended) of this conundrum. We have been heavy Amazon Prime users since the inception of the service. And we value high quality food. Why the heck aren’t we shopping at Whole Foods more now? Or using the free delivery service? After discussion with the primary shopper of the house, our conclusion is that we don’t go to Whole Foods simply because the local grocery options in our new locale, which include Publix and several new Kroger stores, more than adequately meet our needs for high quality meats, produce and especially seafood. And they are much more conveniently located than our Whole Foods options. The potential savings of Whole Foods just isn’t worth the logistical effort. No research or surveys to offer — but I suspect this ranks in the top three reasons more Prime… Read more »
8
|
-1
-   Share

Whole Foods was never positioned as a value brand — just the opposite — and whether it should be (or not) is a discussion for another day. But the issue underscores the fact that most Prime members are deal-seekers and convenience shoppers, too. (Amazon surely recognizes this by upping the ante on free next-day delivery.) Whole Foods doesn’t fit the profile, and its relative lack of physical locations is another problem.

Here in Milwaukee (where I realize there is much less penetration than in a major city like New York or Los Angeles), there are two locations — each at least a 30 minute drive from this suburban dweller. Meanwhile, there are two upscale alternatives within a half-mile: Metro Market (the Kroger-owned nameplate equivalent to Mariano’s in Chicago) and locally-owned Sendik’s. (The Lunds or Schnuck’s of Milwaukee, if you will.) Even Prime members have to deal with the driving distance and the value perception before making the trip to Whole Foods.

While Amazon Prime members can be found anywhere, Whole Foods stores are not. The fact is, most people are not close enough to a Whole Foods store to make the trip worthwhile compared to other, more accessible grocery stores. as noted in the article, the novelty of Whole Foods products is not all that unique any longer. Offering Prime members some level of discount is simply not an enticing enough offer for those Prime members to go out of their way to shop there. Amazon needs to come up with something different that will change the shopping experience at Whole Foods for Prime members besides offering a small discount. Let’s face it — Amazon has not been disruptive with Whole Foods since acquiring it, and the results prove that out.

Amazon Prime excels because consumers can get affordable products — or the sense of affordability — and rapid delivery, leading to the belief that Prime saves you money and time. Whole Foods doesn’t save you money and time. It’s an expensive grocery chain and has fewer locations than many consumers’ preferred grocers. It’s not Amazon Prime, but for food.

The footprint of Amazon vs. Whole Foods is vastly different. Amazon is available across the country with half of US households as Prime members, Whole Foods has just 477 stores in select locations. Many Prime members may not have a Whole Foods near them or find it convenient to go out of their way to shop at one. And since Prime members value convenience, I don’t see a significant number of them changing grocery stores. Amazon’s acquisition of Whole Foods was likely more about getting their foot in the grocery space and learning what it needs to learn to disrupt the market in their own way.

I think we might be getting ahead of ourselves by wondering if Whole Foods (WF) and Amazon are misaligned entities. I think it more appropriate to first ponder what constitutes the IDEAL bricks and mortar partner for Amazon and then grade WF as to whether they fit that bill. To be fair to WF, my sense is that the Amazon Go stores are not the ultimate answer either. In my view, a hybrid of “traditional” supermarket is a likely candidate for the ideal, compatible physical outlet for Amazon. Unlike WF, I see this store being no larger than 20,000 square feet to accommodate shopper convenience and containing more traditional supermarket compatible items and prices. This store would smartly limit its assortment and SKU count and offer one that focuses on top selling categories that do not lend themselves to be delivered to the home on a predetermined schedule. The cashier-less checkout would remain a key optional feature. This store would also be equipped with pervasive interactive technology to provide Prime shoppers opportunities to order items… Read more »
2
|
0
-   Share

There are four marketing strategy concerns that a company should consider. They are:

If there were a Venn diagram infographic of the Amazon and Whole Foods customers, it would show very little overlap for any of these four. The target customers are very different, as Bethany pointed out. Their need states are different and where they are not, Amazon is competing with itself for food sales. The customer’s consideration sets are vastly different.

There is Amazon and everyone else in online retailing. As the article indicates, Whole Foods has a large number of competitors, many with far, far more locations. This also applies to points of differentiation.

They are simply two different target markets. For years, Whole Foods wore the “whole paycheck” badge proudly. Amazon has a completely different positioning. Many of the reasons noted in the article explain the slow conversion. However, despite all of the concerns, Amazon has effectively used Whole Foods as a key distribution option. Give Amazon time. They will figure it out.

For grocery, it is just not time for Prime! This should be Amazon’s slogan, while they patiently concentrate on other parts of their business. Online grocery shopping does not offer a solution that the majority of Americans are looking for, let alone premium (Prime) subscribers. Online grocery shopping is a solution looking for a problem where one does not exist. Who wants to give up the enjoyable grocery experience of personally shopping, or to trust on someone to pick out the better bananas, tomatoes, cuts of meat, or select cheeses for you? Clearly, Americans do not trust a third party to do this, nor do they want to give up the enhanced grocery shopping experience (I enjoy shopping at TJ’s, Costco and Publix), where they can try foods before they buy, select alternate brands as they shop, and see, touch and feel their purchases.

Amazon needs to listen better to their consumers and simply wait for a better time to focus their resources on the online grocery shopping experience.

The reasons described in the article and the posts below it, cover most, if not all, of the reasons why more Prime members are not yet shopping at Whole Foods. But here’s another perspective. If you have been an Amazon Prime member and Whole Foods customer even before the two were connected, what would you say to your Prime member friend who wants you to provide a rationale for becoming a new customer of Whole Foods? Hard to come up with the justification.

As to why Whole Foods is niche: a relatively small store network, an expensive proposition, a focus on issues which are not important to many Americans, and lots of competition from more convenient and cheaper alternatives.

If Whole Foods was Aldi and was owned by Amazon, we would be having a totally different discussion on market share and cross brand shipping.

While I am a Prime Member and there are Whole Foods stores near enough to me, I just don’t enjoy shopping there due to price point, limited selection and crowded stores.

So, why the low percentage of Prime members shopping at Whole Foods? Is it convenient? Are the savings worth the change from where customers may have been shopping at for years? Good questions to consider.

There are cheaper prices with free delivery. Whole Foods was a mistake that will keep on costing.

Braintrust
"The needs aren’t necessarily misaligned, it’s just that the grocery shopping needs of Prime members are being adequately met by other competitors."