Why did mall landlords step in to save Aeropostale? 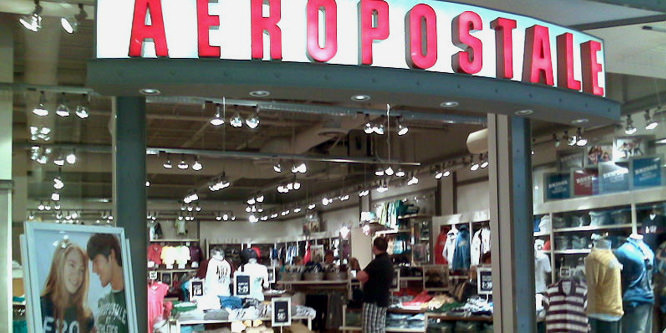 When bankrupt teen clothing retailer Aeropostale failed to receive bids to continue operating its business, two of its landlords — Simon Property Group and General Growth Properties — stepped in to keep the chain running.

According to Bloomberg, Ray Schrock, a lawyer for Aeropostale, told the judge that the deal “could be a model for future restructurings in the years ahead.”

According to a CBS News report, Rich Moore, an analyst for RBC Capital Markets, wrote in a research note “We expect that GGP and SPG’s foray into retailer bankruptcy auctions is a one-off situation in which a sizeable number of viable stores could be salvaged from an undue conclusion.”

The deal for Aeropostale is expected to close today.

DISCUSSION QUESTIONS: What do you make of the deal by General Growth Properties and Simon Property Group to rescue Aeropostale? Do you think the landlord bailout represents a model for future deals or is it an anomaly?

Please practice The RetailWire Golden Rule when submitting your comments.
Braintrust
"When will brands understand that their retail partners’ demise can spell big trouble for them as well?"

"Mall operators investing in retailers is more common in Asia, where malls operate stores to “seed” or fill the gaps in the property."

"...there is no end game to the process. It will not save the malls. And it is ultimately unsustainable."

15 Comments on "Why did mall landlords step in to save Aeropostale?"

The deal to salvage at least a third of Aeropostale’s stores is a sign of the times. The developers apparently don’t see a viable replacement strategy to fill this space in hundreds of regional malls. The problem facing Simon, GGP and others: This may be the beginning of a game of whack-a-mole, in which they try to rescue one failing specialty chain after another, simply to prevent too many vacancies at one time.

The bigger challenge for Aeropostale’s new owners: How to fix the business model, and provide some kind of spark to the brand’s merchandising. Aeropostale was always trailing behind American Eagle and Abercrombie (who have had their own issues), so they need a compelling strategy to make the company more competitive today.

You nailed it Dick. Supporting the weak is an easy choice when few similar revenue generation opportunities exist. The mall operator’s wisdom is that their support for Aeropostale benefits other tenants and ongoing mall operations. They have bought some time. Aeropostale can use it to up their game (as can their competitors).

Too many malls are seeing their retailers pull out since the rise of the outlet malls and the increased number of main street revitalizations being financed by towns all over America. This move is a “let’s save our space” since they know the only way to draw teens is with stores like Aeropostale and Gap, etc. I do think it is a one-of-a-kind move and not every retailer should see this as a new finance tool. Besides, they are still the landlord for all the retailers in the mall, even the one they own!

Mall operators are in the same boat together with their tenants because a shopping mall cannot be easily converted into an office building or any other type of commercial property.

Retailers have been neglected by their partners for far too long. They should not fight it alone. It is a good sign therefore, that the two property management companies have indeed taken an active role in providing a solution. Even if a flimsy solution (which it is). When will brands understand that their retail partners’ demise can spell big trouble for them as well?

Agreed Ori. Partnership means being in the same boat rowing as able toward the same destination. Retailers too often see themselves as customers to providers and overlook all of what providers want to bring to the relationship for mutual benefit. The paradigm of purchasing kills the paradigm of partnership. Partnership will prevail every time that it has the opportunity, because it is strategic and tactical. Purchasing uses buying power to deliver operational benefits.

I am thankful for your added insight Lyle. A buyer is not always considered a strategic partner. But retailers are certainly vital parts of an entire ecosystem of commerce. Brands simply cannot do without them. It is time for true partnership and a sophisticated solution based on common strategies and goals.

Faced with a future of store closings by many retailers (it will continue), mall operators will do what they can — within opportunities that make financial sense — to keep locations occupied. The trick is to do so with the help of those entities engaged in this instance, who know how to analyze a failing business, cherry pick the locations have the best promise and, in general conduct all the due diligence required, which mall operators are not in the business of doing. Together, these two types of entities share the risk while preserving the promising portion of the retailer in question, and the mall locations that remain. I don’t know if this is a future “model,” but it certainly is an additional option available to mall operators.

I expect this to be a one time deal. GGP and SPG are not in the business of operating retail stores, especially apparel stores that target finicky teens and young Millennials. Traditional malls are in trouble, but this is not the way to save them.

It is the time for mall owners to start getting creative, however, saving an already failing retailer does not sound like a good answer. If the retailer is failing, it certainly isn’t doing much to bring traffic into the mall. Unless, of course, that retailer happens to be doing well in that mall. Then maybe this kind of move is worth considering, but I wouldn’t bet much on this approach.

Malls need to be thinking destination and experience. And of course, they don’t have to be all about retailers either.

Let’s assume that this deal made financial sense. That is it was less risky to put $243 million in play than to try to fill the retail space. So, when the next chain goes bankrupt, would not the same logic apply? I assume so, but there is no end game to the process. It will not save the malls. And it is ultimately unsustainable.

The landlords better be figuring out some better options for their properties.

In many ways, this is a head scratcher. Why put this much capital at risk and have other at-risk retailers come knocking at your door asking for a life raft? Certainly there are a huge number of teens walking the malls. But do they spend even close to enough to offset the capital at risk? My guess is no.

Mall operators investing in retailers is more common in Asia, where malls operate stores to “seed” or fill the gaps in the property. In the US it is definitely not a common occurrence, and I think this is an exception to buy the chain and the mall operator some time to improve the chain or do a more orderly closedown.

The mall is emptying of stores, big ones and small ones. Some mall operators see Aeropostale, as a private company, to be a potentially profitable retailer. Albeit a small one, a very small one.

Taking public companies private to avoid the tyranny of comps seems to be a viable alternative. However, the new companies have to compete within an industry in turmoil, in which the in-store experience must be rethought with a new range of investment.

In the “tween” sector of retail, this seems to be a very dicey proposition.

And then again, “retail ain’t for sissies!”

Design centers are going through the same exercise. No secret that repurposing one’s assets is no small task.

The biggest issue is how quickly you can become what you will be next. Particularly so when you aren’t sure what that is.

Without knowing more details of AP’s finances, we’re left with speculation, but mine is that the company was probably viable as a smaller chain, and was dragged down by over expansion and/or excessive debt … or at least GGP/Simon seem to think so. But I can’t see it being a model, since such (an arrangement) puts the property groups and their tenants in competition with one another — hardly a good thing for either (and unlikely to gain much approval in regulatory channels).

More than anything else I think this testifies to the desperation malls have in avoiding empty storefronts. The days of too many stores fighting each other to get into malls seem to be ending, though for “good” malls, I imagine the competition is as strong as ever.

Braintrust
"When will brands understand that their retail partners’ demise can spell big trouble for them as well?"

"Mall operators investing in retailers is more common in Asia, where malls operate stores to “seed” or fill the gaps in the property."

"...there is no end game to the process. It will not save the malls. And it is ultimately unsustainable."