Why do healthy eating campaigns fall on deaf ears? 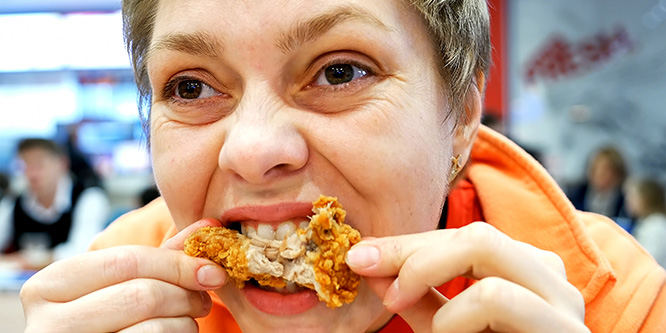 A new study from a Cambridge historian finds that people are at least “complicit” in responsibility for the rising levels of obesity since the late 1980s onwards as they’ve “re-worked, misinterpreted or selectively deployed” advice around healthy eating.

In an article published in Contemporary British History, Dr. Katrina-Louise Moseley makes fresh use of consumer interviews and surveys conducted in England and Wales in the 1980s and 90s to explore why unhealthy eating patterns continued despite new nutritional guidelines being issued decades ago.

She credits grocers and food manufacturers with initially producing and disseminating much of the knowledge about healthy eating as society began focusing on nutrition. Prof. Moseley said in a statement, “It was the food industry rather than politicians or doctors that gave people usable, workable public health messages.”

Skepticism soon followed, however, as consumers still felt overloaded with “confusing, contradictory and unreliable” messages. Words of advice involving “balance” and “moderation” in particular left themselves open to subjective interpretation that often played up convenience.

Complex messaging continues to be a hurdle. In her article, Prof. Moseley contrasts the challenges to the success of Britain’s anti-smoking campaign that changed attitudes around tobacco in the sixties and seventies.

“‘Don’t smoke’ was a clear-cut message but you can’t tell people not to eat,” she said. “Food can’t be rejected outright, it has to remain a part of everyday life, and that makes it so much more complicated. We’re still really struggling with this today.”

While many healthy-eating advocates continue to “cast blame” at the food industry or grocers, Prof. Moseley argues more thought should be put into how people rationalize their eating behaviors and interpret advice about food.

Most commonly taking the blame for subpar eating habits are junk food messaging and their placement in stores, busier lifestyles that drive fast-food purchases, the high cost of healthy food and food deserts. Boredom and stress have also been cited as drivers of binge eating during the pandemic.

Please practice The RetailWire Golden Rule when submitting your comments.
Braintrust
"All of the healthful eating ads and promotions we see seem to me more like public service announcements than anything else."

12 Comments on "Why do healthy eating campaigns fall on deaf ears?"

Ultimately health, like most things in life, comes down to personal responsibility. You can campaign, educate and inform all you want, but if someone does not wish to heed that advice there is little that can be done. And, indeed, if someone is happy being overweight, it is not the business of the state or anyone else to interfere. What I would say, however, is that nutritional and health advice around food can be confusing because it constantly changes and often contradicts itself. One minute butter is bad, the next it is a natural form of fat and is good. Too much meat is bad, and plant based substitutes are a savior, but then they are ultra-processed. And so it goes on. No wonder people have turned a deaf ear to all the requirements!

We’re Americans – we have no self control, obviously. My fave is going to Europe and drinking coffee in these little cups then coming back here and getting a “trente” along with everyone else. Yikes.

While mixed messages abound and we occasionally change what is healthy or what eating healthy means, the key psychological factor is a lack of motivation to eat healthy. Until a generation grows up where healthy is the norm and unhealthy is shunned, there will be lots of rewards for unhealthy eating. The negative consequences of unhealthy eating are not immediately felt – usually, quite the opposite (e.g., “boy that tasted good”). Nobody ever said that about quinoa salad.

All of the healthful eating ads and promotions we see seem to me more like a public service announcement than any thing else. I feel like the only people that are happy to see them are those who advocate for healthful eating, not those who need to eat healthfully. Until a person comes to his/her own conclusions about his/her health, sadly, they are only words.

This study is quite flawed in that these nutritional guidelines turn out, from what I can sort out, to also be wrong. We worried over fats when that was the wrong focus. We were told it was an eat less move more problem – except eating less/moving more inherently changes our metabolism and increases our need to eat even more due to evolutionarily developed needs to maintain nutrition.

The body of evidence around how the nutritional guidelines may have driven obesity increases is quite compelling. Assuming that to be true, then the more effective store communication of the guidelines, then the bigger the obesity epidemic.

This study is further flawed in that the obesity epidemic includes obese infants. It is not possible in any theorizing to assign blame for eating habits to babies so something else is going on here.

It’s another study designed to blame the individual when it should look at the underlying principles which have been promoted for 60 years.

Achieving a meaningful change in healthy eating habits in the U.S. may only be possible once it isn’t perceived as work. It takes effort to follow a healthy eating plan and that competes with jobs, family, and other demands, often falling to a lower priority. The time to sort through sometimes conflicting advice and determine what makes sense can overwhelm the value programs offer. This is where opportunity lies in offering low-cost, convenient options to shoppers, including tips on preparation.

Mixed messages are inevitable. There are countless studies being run with every imaginable sponsoring entity. The results of these studies will appear to contradict each other unless a deep dive on the studies’ methodology is reviewed and few of us have time or knowledge to do that. It would be hard to imagine most of us are not aware of foods that are not healthy. Moderation in all eating probably is the best to which we can aspire.

Obesity is a complex issue that involves behavioral and genetic factors. It has become a personal and a societal problem. Sure, each of us is responsible for the choices we make given access, time, and economic constraints. Yet, obesity is estimated to cost Americans $200 billion a year in medical costs, not to mention productivity decreases and reduced qualified recruits for military services.

The psychological stress of extreme time pressure, combined with the rise of convenience everything and the need for immediate gratification, have made actual healthy eating a problematic proposition despite proven benefits. The knowing of healthy eating does not easily translate to the doing of healthy eating; marketing campaigns are unable to change that reality.

The problem is that “healthy eating” messaging is deeply intertwined with extreme dieting marketing. If brands worked to actually make healthy choices more accessible, and spoke of those choices in more science-backed ways, losing weight would feel more sustainable to those who are in need of doing so for health reasons. The reality is that most healthy eating campaigns are positioned as ways for women to shrink themselves for aesthetic reasons and to feel ashamed of their cravings. We need to move away from terms like “guilt-free” for example and focus on helping shoppers make nourishing changes to their eating that they can maintain for the long-term.

The message needs to be simple and focused. For example: Sugar is the most addictive substance on the market today.

It comes down to personal responsibility and the choices consumers make. It’s ironic that supermarkets launch healthy eating campaigns for their shoppers and even hire nutritionists. But grocery stores have an entire aisle devoted to carbonated soft drinks, which every honest nutritionist says is awful for good health. Then there are baked goods, candy and ice cream for sale — all laden with lots of sugar, which is a killer for good health. Are supermarkets sending a mixed message? Should they sell these goods? Of course, for two reasons: one, if they don’t, a competing store will, and two, some shoppers enjoy these foods in moderation. Again, it comes down to personal responsibility and the choices people make.

‘Cuz people are dumb? If that seems overly blunt … well, sorry, but the answer to “are the people who are the targets of good advice responsible for ignoring that advice” would seem to me to be “yes.” Yeah, sure there’s occasional complexity and reversal – trans fat (and the recommendation to chose that over saturated fats) would be an obvious example — but for the most part sound advice hasn’t change much over the years. None are so easily “confused” as those who want to be.

Braintrust
"All of the healthful eating ads and promotions we see seem to me more like public service announcements than anything else."