Will a cheaper, faster Uniqlo catch on in the U.S.? 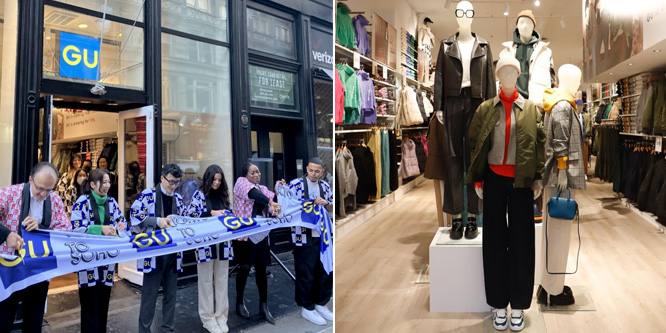 The brand, called GU, is trend-focused and has grown popular in Japan with young, budget-conscious shoppers but has yet to make a significant mark elsewhere, according to High Snobiety. The only test of the brand outside of Japan thus far consisted of a few stores in South Korea, which closed at the beginning of the pandemic. The Soho location and accompanying GU webstore represent the brand’s first appearance in the West.

Uniqlo has been reporting standout success even as apparel competitors like Gap and Kohl’s continue to struggle.

Fast Retailing said in September that it was on its way to making its first annual profit in North America thanks to a pandemic-era revamp of its logistics, pricing and discounting strategy, according to Reuters. Uniqlo is pursuing a stateside footprint expansion as well, beyond major urban hubs and into smaller cities, with plans to open 30 stores every year until it reaches 200 total.

Uniqlo currently has 44 stores in the U.S., including its flagship in Soho, which opened in 2006.

The flagship was one of the chain’s handful of stores prior to its first major U.S. expansion, which was announced in 2011, according to reporting by Reuters at that time.

While GU is a big seller in Japan, fast fashion as a whole has grown controversial globally and Fast Retailing has not escaped criticism.

Uniqlo has come under scrutiny for its ongoing use of cotton produced in the Xinjiang province of China, according to Reuters. Xinjiang has become a perennial source of global concern due to reports of the use of forced labor in production carried out in the region. Other fast fashion retailers, like H&M, have backed away from using Xinjiang cotton. The French government has opened an investigation into four retailers, including Fast Retailing, for concealing “crimes against humanity” in the region. The chain denies the allegations and says it does not tolerate such violations from its vendors and suppliers.

DISCUSSION QUESTIONS: Do you think the opening of a single GU store in Soho (along with an online presence) is the right way for Fast Retailing to introduce the brand to the U.S. market? Will negative sentiment surrounding fast fashion impact how the GU brand is received in the U.S.?

Please practice The RetailWire Golden Rule when submitting your comments.
Braintrust
"The strategy is right. The demographic is right. The rest will depend on the assortment."

"Given the recent consumer spending pullback, I think fast fashion will continue to grow in popularity — and New York is a prime location to introduce GU to the market."

"Arguably, retail doesn’t need another faster, cheaper fashion player and it will be difficult to outshine Shein."

16 Comments on "Will a cheaper, faster Uniqlo catch on in the U.S.?"

Opening one store is a test – a small test, and that’s not a bad way to begin. The negative sentiment about fast fashion’s impact on the environment is real and growing. That said, there are still opportunities for retailers to introduce lower cost product assortments such as GU is offering. Ultimately, the consumer will decide if they accept or reject the idea/brand. Testing is the one surefire way of measuring interest.

If the play is price points and styling for young/mass appeal, Soho is one of the worst places to put a test store, NYC and fashion press coverage notwithstanding. Put stores in Chicago, Houston, and the Mall of America instead. I hope they are paying attention to sizing for North American customers as that’s been an annoying issue on our visits to Uniqlo locations stateside.

Slow fashion is probably better than fast fashion, but smart fashion may be the biggest win of all. And by smart fashion I mean a better leveraging data and supply chain management to stop overbuying. Reduce end of season residue inventory that is sold at margin killing prices. Better margins can be reinvested in more sustainability initiatives.

There is some negative sentiment around fast fashion, but that hasn’t stopped growth. Just look at the rise of Shein and the ongoing expansion of Primark. As such, it’s not like GU is expanding into a hostile market. I think GU can succeed, especially with its lower price points, but it’s going to need to work hard to build brand recognition and a loyal base of customers. Especially so as its products are more basic. For all of its ambitions, Fast Retailing – owner of Uniqlo and GU – remains very small in the U.S. There is a lot more work to do to boost both brands.

Less expensive retailers have made a significant impact on the apparel business. There is no reason to suggest that the trend will not continue. If so, GU is in the right place.

Concerning fast fashion criticism. I believe it is one of those things people talk about and forget as soon as they like the product and the price.

Good points Gene! I think fast fashion at reasonable prices is appealing to younger generations and they will overlook the controversy if they like the products and prices. Having a physical presence is important for apparel brands and at a minimum, they need to be in major cities to drive fashion trends.

There is a big gap between consumer sentiment about fast fashion and consumer behavior when it comes to purchasing these items. We seem to like to talk about responsibility on the one hand, but love a good deal on the other.

As I recall, one of Uniqlo’s advantages at the outset was trendy fashion, quality manufacturing and low prices. Before coming to the states, they were so omnipresent in Japan they didn’t need a website. That changed in the U.S. Their success and continued growth are a testament to lessons learned. A single GU store with an online presence gives them the opportunity to observe and react. The impact of negative sentiment around fast fashion is dependent on awareness and concern. I’m still amazed at how so many of the products I buy, clothing and others, are made in China. I haven’t started to look before I buy. Have you?

Their leveraging of technology like RFID will allow Uniqlo/GU the real-time inventory visibility that only a select few in the industry can match. The parent company Fast Retailing knows what they are doing, and slowly dipping their feet into the pond is the way to go. the GU concept should be a hit.

That being said, perception is reality, and they have a problem that’s a deal-breaker for many in their target market worldwide. But I doubt the brand introduction of GU in the U.S. will garner much criticism, as consumers seem to have selective memories. And if Fast Retailing really is engaging in harmful practices, let’s hope they find a way to transfer their efficiency wins from technology into ethical wins in production.

Given the recent consumer spending pullback, I think fast fashion will continue to grow in popularity — and New York is a prime location to introduce GU to the market.

Arguably, retail doesn’t need another faster, cheaper fashion player and it will be difficult to outshine Shein. Even so, the biggest concern may be self-cannibalization a la Gap/Old Navy. Is Fast Retailing that sure of the separation between Uniqlo and GU?

At the risk of going off on a (seemingly petulant) tangent, and for an issue which I’m lukewarm about, at best: we often have the question “why hasn’t sustainability made more inroads?” and here we have a retailer whose only stated attributes are “trendy” and “cheap” — oh, yes, we also have a human rights issue thrown in for (not so) good measure — and fully half feel it’s “very likely” to find success. Maybe the question should be “can sustainability ever really make any progress when it seems to be nothing more than a trendy side issue?”

Fast retailing is not just about merchandising, it is about being nimble in opening concept stores and judging how well it draws in the market. There will always be fast fashion given changing trends….

I don’t believe one store to be a presence, and the negativity around fast fashion is real. I hope that the company is prepared to show how they have a differentiated offering, or this will be short lived.

A store plus an online presence isn’t what will bring GU to the U.S. market. It will be social presence more than anything. But a Soho store always has a certain appeal, and can serve as a good test bed.

That said, I really hope not. While other big brands, both within and outside retail, are making a concerted effort to improve the human impact of their supply chains – both from a labor and sustainability perspective – it looks like GU isn’t. And while I sincerely hope their target demographic puts pressure on them to shift their practices, if not, hopefully the actions of other brands (in terms of supply chain transparency and labeling, etc.) will help drive more human friendly practices across all of them in the future.

​​Soho has always been a popular tourist spot. I am pretty sure that Uniqlo’s GU store in such a neighborhood would attract a lot of people. Uniqlo has been known for offering a wide range of product assortment at reasonable prices. Moreover, by establishing one store at a time, Uniqlo can also evaluate customer demand.

"Given the recent consumer spending pullback, I think fast fashion will continue to grow in popularity — and New York is a prime location to introduce GU to the market."

"Arguably, retail doesn’t need another faster, cheaper fashion player and it will be difficult to outshine Shein."