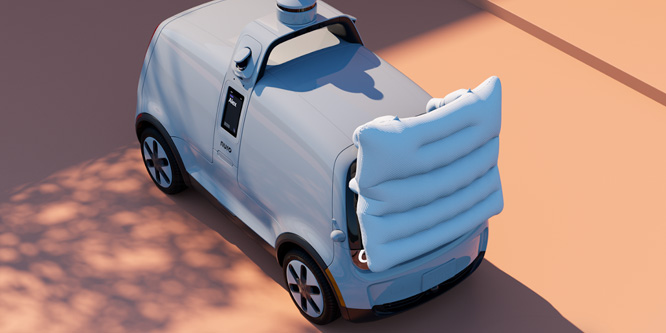 Full-sized autonomous vehicles can make pedestrians and other drivers a little nervous. One of the big startups in the autonomous grocery delivery space is trying to address that with a safety measure meant to soften the impact of the new technology.

Nuro just announced the latest generation of its grocery delivery vehicle, a self-driving electric car capable of carrying 500 pounds of groceries with heating and cooling capabilities, according to Popular Science. One of the most notable parts of the new design is an airbag which, at least in renderings of the vehicle, looks like an air mattress positioned on the flat, front end. The cushion is meant to inflate if the car runs into someone.

Nuro has piloted different iterations of its grocery delivery vehicles and other autonomous delivery services in a few U.S. states with multiple big name retailers, the most recent being a pilot in conjunction with 7-Eleven in California.

In November of 2021, CNBC reported that Walmart had been working with an autonomous vehicle startup called Gatik since that summer. The technology collaboration consisted, at that time, of two box trucks, entirely driverless, delivering products from a dark store to a Walmart Neighborhood Market, running 12 hours a day on a seven-mile loop.

Since autonomous vehicle technology became a reality, critics have argued not just about potential safety concerns, but about jobs in trucking and transportation that would be lost were the technology to be implemented at scale.

The trucking job market, however, is currently experiencing a labor shortage so significant that the government has launched an apprenticeship program to train young truck drivers, according to The New York Times.

While labor costs could be pushing the development of this technology, driverless electric vehicles may prove costly as well — at least in the short term. A recent opinion piece on Bloomberg reported that Tesla, even as its business booms, is scrambling to secure basic materials for electric vehicle batteries as supply chain disruptions are creating severe shortages.

DISCUSSION QUESTIONS: What do you see as the main obstacles to autonomous vehicles being used for grocery delivery? How significant is the safety issue and do measures such as airbags address those concerns?

Please practice The RetailWire Golden Rule when submitting your comments.
Braintrust
"Remember the horse and buggy? Everyone was going to miss those horses!"

"Driverless vehicles are trouble waiting to happen. And when enough trouble happens, they will fade away. Thank goodness."

21 Comments on "Will airbags calm fears about driverless vehicles?"

I do believe autonomous vehicles will wedge their way into service. That doesn’t bother me. But a cushion on the front tells me designers and engineers are not 100 percent comfortable with creating a vehicle that won’t crash into someone in the lot or at home. All it takes is one bounce off of a person and the fear factor will dent acceptance of the technology. I surely would not want to be hit by a golf cart with cushion bumpers at three miles an hour. Would you?

A 500-pound+ vehicle that can travel up to 25 miles an hour has an air mattress front and back that will “soften the impact” when it hits someone or something. How reassuring. Air bags can save your life, but they’re going to hurt.

A friend had a less than 5 mph accident bumping into a car that stopped suddenly in front of him. Cost of repair to one vehicle was about $5,000 by the time all the technology in the “bumper” was replaced and recalibrated. Why didn’t the auto-stop tech work? Because I (oops, “he”) wasn’t going fast enough. I don’t think this is ready for prime time yet.

Cathy, I must disagree. Nothing is scarier than a truck driver on his mobile or having one too many at the truck stop or nodding off after too many hours.

At the end of the day, home delivery is about convenience, and autonomous vehicles may not yet meet that bar. Right now, delivery brings your items to your doorstep (and for some retailers right into your home or garage). Autonomous vehicle delivery helps solve driver shortages but, for consumers, it translates into having to be available at a very specific time to go outside, use your phone or a code to open up the vehicle, and retrieve your items – at least for now. That’s not necessarily aligned with how some consumers define convenience. As the “cool factor” of having an automated vehicle bring your delivery fades and usage becomes more commonplace, we will have to see if consumers continue to embrace it or demand other options.

The main obstacle? Easy, people don’t trust the technology. They want to see a human in control.

The reality, experiencing the safety technology in newer automobiles, is that I would trust an autonomous vehicle coming down the street more than any human driver.

As written in Technopedia: “autonomous vehicles are orders of magnitude safer in preventing many types of accidents that have to do with human driver error — for instance, simply rear-ending another vehicle because the driver wasn’t paying attention. These types of accidents will practically never happen with autonomous cars.”

Retail – regardless of if it’s grocery, fashion, or electronics – is about the experience. Tech can be an enhancement to the experience if deployed correctly, but I see autonomous vehicles as a detractor or at best a neutral part of the overall experience. If someone chooses home delivery, then the retailer has a unique opportunity to exceed the consumer’s expectations with incredible customer service. Do you really think that an autonomous vehicle is able to impart a memorable experience? Can a human being making the delivery impart a lasting impression? What would you rather bet on? I get the cost implications but, putting those aside, autonomous vehicles neuters the opportunity, and I don’t think it will persist for long.

Remember the horse and buggy? Everyone was going to miss those horses!
Change is scary sometimes. Frankly, I’d trust a driverless car armed with dozens of computers making millions of decisions every second, over a distracted, texting, tired, impaired driver every time.

As a currently horse-less horse guy, Kevin, I desperately miss those horses!

Better hurry and get yourself another horse, Percy. You can’t live without one when you’re a horse guy!

As a veteran of a number of very heated pillow fights in my youth, I can report that force and mass can make even a pillow or airbag a formidable weapon. In all seriousness I’m interested in the learnings, but I have reservations about this becoming a “thing” in near term. There are a ton of obstacles here that would have to be overcome to make this work at scale: To have a fleet of these vehicles that can reach shoppers in a timely manner would be a massive investment. I didn’t see the cost per vehicle but assume it’s very high. The ROI on that investment would take years to recoup at grocery margins. Durability of the cars. These things are going to be expected to deliver a lot of miles with little maintenance. That’s a lot of charging ports and congestion at the base. There is also the thought that a lot of time when they’re out in the world, they will be subject to weather, vandalism, etc. Smart shopping carts had this… Read more »
0
|
0
-   Share

The airbag isn’t a bad idea, but it does make one think that if we have to put the airbag on the outside of a vehicle, maybe it’s not quite ready for “prime time.”

The airbag is for theater. It really isn’t necessary.

Like Ian’s comments, I hit a Ferrari that was stopped in front of me at around 3 MPH. Yes, as much as I hate to admit it, it was definitely my fault. The damage to my car which looked like it had very little damage cost just under $10,000 to repair. The Ferrari had a dent in its rear bumper the size of a softball and I can only imagine what that repair cost.

The moral of the story is that a great deal of damage can occur at very slow speeds and at 25 MPH the damage from autonomous vehicles can be so much worse.

Autonomous vehicles have already been successfully leveraged in warehouses—and significantly impacted picking/packing productivity. However that is in a controlled, focused environment where humans are also trained to co-work with those vehicles. Releasing AVs into “the wild” will have a bit more friction as the general public is often skeptical or fearful of the unknown.

The airbag tells me that the company is expecting the vehicle to run into something. That does not instill confidence in me in their safety.

If Bibi (aka: the Michelin Man) had a child…. Doesn’t this just reinforce the view they’re apt to hit you? Or perhaps I should say “would reinforce” if that were an issue; but I don’t think safety concerns have much to do with adoption for local delivery. There are just so many other problems to work through first.

First, there is the safety issue because accidents are bound to happen. Second, there is the loss of job to humans, notwithstanding the current temporary lack of drivers. Just because the technology is available doesn’t mean it should be deployed. Driverless vehicles are trouble waiting to happen. And when enough trouble happens, they will fade away. Thank goodness.

The main obstacle? Autonomous vehicles have massive remaining problems. For a good, honest look at those problems I recommend Rodney Brooks’s analysis of predictions. This isn’t an “anti” blog post. Rather, it’s someone deep in the business looking at realities.

Scientists deep into the ideas are far less excited than these types of breathless announcements. Besides, the airbag goes after customer confidence. If you’ve watched videos from Tesla self driving an airbag is definitely not addressing the problem.

According to me, regulations and change management are the main challenges to AVs. When it comes to regulation, having a driver inside the AV who can operate manually if necessary can be a short-term solution. This, in turn, may reduce the number of accidents caused by driver fatigue.

Concerning the subject of change management, the underlying cause of the problem is the fear of adapting to something new. However, if all safety regulations are followed, people will eventually begin to embrace the incredibly handy AVs. With further AV advancements, more people will adjust to the new era of self-driving automobiles, and this will become our new normal.

Braintrust
"Remember the horse and buggy? Everyone was going to miss those horses!"

"Driverless vehicles are trouble waiting to happen. And when enough trouble happens, they will fade away. Thank goodness."