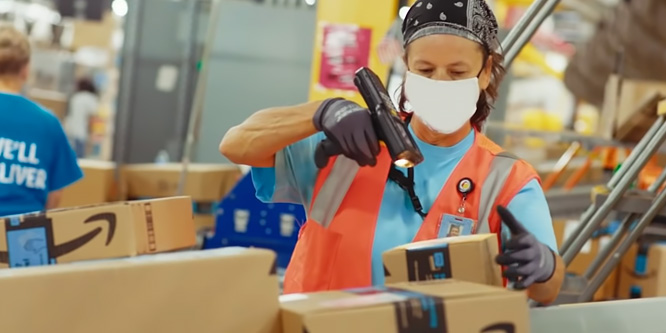 Amazon.com yesterday said it will invest $1 billion over the next year to raise the pay of frontline workers and that it was introducing a new perk that would give these employees early access to a portion of their paychecks.

The retail and technology giant said that its frontline workers in customer fulfillment and transportation will now earn between $16 and $26 per hour, depending on their position and where they are working in the U.S.

“Front-line employees across customer fulfillment and transportation will now earn, on average, more than $19 per hour in the U.S., and they also have access to a growing range of comprehensive benefits to support themselves and their families,” said John Felton, Amazon’s senior vice president of worldwide operations, in a statement. “Continuing to invest in pay, providing easy access to earned wages at any time during the month, and offering great benefits and career advancement opportunities are all part of our long-term efforts to be the best employer in the world.”

Amazon is introducing Anytime Pay, which provides the company’s employees with access to up to 70 percent of their eligible earned wages ahead of a pay day. The timing is up to the worker and there is no fee attached to the service. The company previously paid workers on a regular schedule either once or twice a month. Employees are expected to respond favorably to the perk, which gives them more flexibility when it comes to their personal finances.

Amazon’s actions coincide with concerted efforts to unionize the company’s warehouses and continuing criticism of its labor practices.

A Recode report in June provided details on a leaked 2021 internal memo from Amazon that posited that the rate of turnover at its warehouses would far outstrip its abilities to hire and train new workers by 2024 unless the company took action. The number of warehouse workers Amazon churns through in a year is equivalent to the size of its entire frontline staff, according to the memo. The report concluded that Amazon could forestall its staffing issues through higher wages and increased automation, but that more significant changes would be needed to avert a labor crisis down the road.

DISCUSSION QUESTIONS: What do you see as the biggest challenges facing Amazon.com when it comes to recruiting and retaining frontline employees? Is Amazon in a weaker or stronger position when it comes to frontline staff than its primary competitors?

Please practice The RetailWire Golden Rule when submitting your comments.
Braintrust
"Understanding what makes a company a great place to work is key to keeping employees happy."

"Amazon doesn’t exist without the ability to execute on its logistics brand promise. So there was little choice here. It’s nice to have deep pockets."

"A billion here, a billion there — pretty soon it adds up to less churn. The Anytime Pay idea is what’s brilliant. For other retailers, that’s a tough perk to match."

Amazon doesn’t exist without the ability to execute on its logistics brand promise. So there was little choice here. It’s nice to have deep pockets.

Anytime Pay and similar programs, are growing in retail and foodservice. It’s smart to offer frontline employees access to their money earned shortly after they have earned it versus weekly or bi-weekly. Especially for lower-paying jobs, it can be an incentive. Amazon – and all retailers – will need to work hard to attract and maintain frontline workers and while this is a step in the right direction, it may not be enough.

I suspect that there are as many or more “frontline workers” as there are “other workers” at Amazon. Those are many jobs that have to be filled. That is not easy. Attracting that many people is a challenge and offering these features and engaging employees who typically are out alone most of the working day is one approach that should work. A smart move.

Increasing pay and adding more flexibility to receive their paycheck quicker are definitely smart ways to attract and retain employees. However sometimes the softer benefits are even more important to employees, such as working conditions and flexible schedules. Understanding what makes a company a great place to work is key to keeping employees happy.

Amazon has a really bad reputation as an employer. The item that keeps coming to mind is the company not allowing its workers to take bathroom breaks.

Because of its poor employee relations during the pandemic, even with its “what a great place to work” commercials, I think it’s at a real disadvantage against competitors, where even the retailers we thought were “good guys” are unionizing. Some of this just takes time. You can’t throw money at everything. Sometimes you have to make life more pleasant.

And it doesn’t help when your chairman is building rockets with his spare change.

When running a distribution and fulfillment network, you are measured on a cost-per-unit basis. The labor content of that cost is critical to your success. If your operation is plagued with higher turnover than the competition, you are at a disadvantage that technology is unlikely to overcome. Amazon and Walmart are brutally fighting over keeping their front-line employees happy. Whether it’s Amazon’s $1 billion investment or a few more billions, the high cost to recruit, train, and retain will make an investment in employee programs attractive.

A billion here, a billion there — pretty soon it adds up to less churn. The Anytime Pay idea is what’s brilliant. For other retailers, that’s a tough perk to match. For the so-called frontline workers, many living paycheck to paycheck, it should keep thousands and thousands on, well, the front line. Until Amazon figures out how to replace every single frontline worker with a robot, they will be focusing on reducing the churn and keeping the union out at all cost.

The biggest challenge will still be to find people willing to work in retail as a career. (I guess Amazon is a retailer.) We need to not only pay a living wage but create a path to wealth for these employees. Many senior retail executives in the past came out of management training programs. I don’t see the same level of commitment to hire from within today.

Though I’m not intimate with what it’s like to work at an Amazon warehouse, I’m thinking that it’s like a warehouse job anywhere: hot, tiring, repetitive … in short, not lot of fun. So higher pay will certainly help — or at least not hurt — but it’s just one of many factors.

A good move by Amazon with a nationwide scramble to find and retain front-line workers, especially good ones. Having flexibility in pay is another small, but important perk. Amazon should be eyeing this closely over the next 1-2 years, to make sure they don’t lose ground to other retail competitors, because it costs less to keep people employed than it does to go find new hires.

Braintrust
"Understanding what makes a company a great place to work is key to keeping employees happy."

"Amazon doesn’t exist without the ability to execute on its logistics brand promise. So there was little choice here. It’s nice to have deep pockets."

"A billion here, a billion there — pretty soon it adds up to less churn. The Anytime Pay idea is what’s brilliant. For other retailers, that’s a tough perk to match."