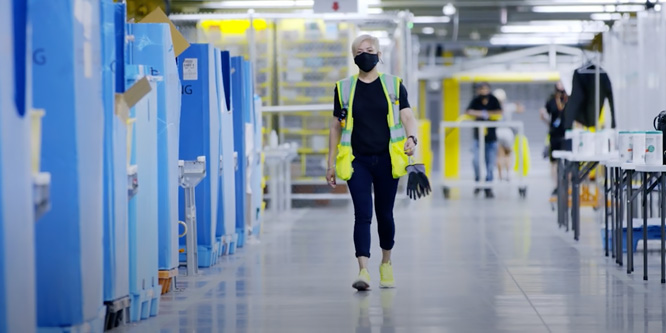 Amazon.com’s size and huge rate of employee turnover appear to be setting up the retail juggernaut for a strange hiring problem — it is on the way to running out of people who are willing to work at its warehouses.

A leaked internal Amazon memo from mid-2021, recently acquired by Recode, describes a concern at the company that it may be unable to find anyone left to work in its warehouses by 2024.

Amazon’s calculation of potential prospective employees takes into account factors like income level and proximity to a current or planned Amazon facility. So while the research does not indicate that every employable person living in the U.S. will have worked at Amazon and quit by 2024, it does not paint a rosy picture of the potential employment pool.

The research suggests that raising wages and increasing warehouse automation, as well as other moves, could push the problem out farther into the future, but that Amazon will have to make significant changes to how it does business to avert the labor crisis entirely. The number of warehouse workers Amazon churns through in a year is equivalent to the size of its entire front-line staff.

Amazon’s labor practices have recently come under fire over a number of issues.

Critics have argued that the principle of “customer obsession” touted by Amazon is flawed, leading to employee burnout and poor worker/company relationships, among other problems.

Work safety incidents at Amazon warehouses have prompted Congress to call for an investigation from the U.S. Department of Labor into the company via the Occupational Safety and Health Administration (OSHA), according to the Cherry Hill Courier-Post. In a press conference, U.S. Rep Donald Norcross said workers at Amazon warehouses were 88 percent more likely to be seriously injured on the job than in comparable warehouses.

Amazon has also become a focal point in the national discussion over unionization.

This month Amazonians United, a labor group responsible for organizing unions at a number of Amazon warehouses nationwide, accused the company of illegally firing Maryland employees over worker rights-related issues, according to The Washington Post. The group filed charges with the National Labor Relations Board. Kelly Nantel, an Amazon spokesperson, denied the assertion, saying, “Whether an employee supports a certain cause or group doesn’t factor into the difficult decision of whether or not to let someone go.”

DISCUSSION QUESTIONS: Do you see Amazon averting this looming labor crisis, and how? What lessons can other major retail employers take from Amazon’s state of affairs?

Please practice The RetailWire Golden Rule when submitting your comments.
Braintrust
"Amazon should apply the same level of focus on it employees as it does it the customer, then it would not have to worry about running out of people to hire."

"We really are running out of workers willing to work for companies that take advantage of them. It’s the legacy of COVID-19."

"Amazon has prepared for labor shortages by investing in automation, including robotics, to fill productivity gaps."

Amazon has done a lot of things right, but employee relations is not one of them. It seems like Amazon took a difficult labor situation and made it significantly worse in the ham-handed way it has dealt with employee concerns, bad press and the unionization push. Notwithstanding the progress made in automation, Amazon will still need humans for the foreseeable future, and so it’s in their best interest to completely re-set their approach to employee relations. Workers have never had more clout than they do today, and it behooves all employers to be mindful of how they conduct employee relations.

I wonder how much of this memo is Amazon scenario testing – which it does a great deal – and how much is based on a completely realistic view. For example, Phoenix gets mentioned in the memo. However the Phoenix metro area labor pool is growing rapidly because it is one of the fastest growing cities/regions in the U.S. You also have to factor in how much growth Amazon is going to generate over the next five years or so – it will likely be much less than the previous five or 10 years. All that said, Amazon does need to focus on retention as much as it focuses on recruitment. It also needs to continue down the path of automation to reduce costs and its reliance on labor.

Oh come on — Amazon has been one of the, if not THE, most creative companies in the world over the last 20 years, they’re going to figure it out and probably are as I write. Metaphor time: my brother grew six inches in a single summer once and our doctor said, “that must’ve been painful.” The same applies to a company of such massive size and continued rapid expansion: that’s gotta hurt. But so far, judging from the past, they’ve been able to move quickly and solve whatever pain point arrived, so I’m thinking the same will hold true for labor — time to focus!

If the pace at Amazon warehouses is that frantic, and accepted by top management, Amazon can create shorter shifts, higher pay, improve the environment with recreational areas, exercise rooms, relaxation lounges, and hourly pay raises. Maybe a 30-hour week in a pressure-filled Amazon warehouse is the equivalent of a 40-hour week anywhere else. Worth a try?

Amazon does not have a hiring problem, it has a turnover problem. Likely most of the issues that cause employees to leave have to do with compensation and the working conditions. These are the same reasons many people join a union. Amazon should apply the same level of focus on it employees as it does it the customer, then it would not have to worry about running out of people to hire.

The sheer fact that Amazon is in a position to run out of willing employees is an indictment. A company can’t be obsessed over its customers to the exclusion of its own employees. Any Management 101 course will tell you that employee satisfaction is a key to long-term success.

How can Amazon get there? It probably needs a few solutions. First, increased automation will reduce the number of workers needed. And, God willing, help reduce the injury rate. Second, increasing compensation and incentives should help too. Incentives could include everything from stock options to benefits for part-time workers.

Amazon could also consider opening a gateway to U.S. citizenship, recruiting workers from other countries, and sponsoring them.

Beyond this, the company culture needs to be addressed. Amazon should seek teaching moments from mentors like Microsoft, IBM and Google. These are rated the top three companies for workplace culture.

No doubt there has been hundreds of internal white papers written on this labor issue among Amazon staff and management. If they haven’t figured this out already – which I’m sure they have – then they deserve the public flogging. That said, Amazon would be well advised to put a lot of focus on associate retention and work environment, and make significant improvements in these areas pronto. Any delay will incur more negative PR, which will begin to dim the halo that has surrounded Amazon all these years.

Amazon has prepared for labor shortages by investing in automation, including robotics, to fill productivity gaps. Robots like Proteus are designed to protect Amazon warehouse workers from injuries.

I guess the company is going to have to get involved in immigration reform. We really are running out of workers willing to work for companies that take advantage of them. It’s the legacy of COVID-19.

I don’t even work there, but have seriously distanced myself from the company because of its labor practices. I can’t imagine watching Bezos’s rocket go to the edge of space while working the line for $12/hour.

In subscription business marketing, people often forget that churn means you eventually get a shot at regaining lost customers so the way they leave your service is a strong conquest driver (re-conquest). If Amazon realizes they need to populate their warehouses with RE-hires, it should affect how they handle the send-off of employees as they leave. They could even have a “rehire program” that sweetens the deal for people to come back.

Amazon would do well to apply some of their customer retention strategies to employees. COVID-19 and immigration policies have made this an employee’s market and companies need to be creative in how they address employee experience and retention.

If you don’t learn from the past, history will continue to repeat itself. The same statement about running out of employees was said about Walmart 20 years ago, and yet today, Walmart can find the staff it needs to run its stores and staff its warehouses. Yes, it is still struggling to find enough truck drivers, but is tackling that problem head-on, and I am sure it will overcome the shortage. The same can be said for Amazon. Amazon is waking up to the fact that if you want to win the war for talent, you need to build the same employee focus they have built for their customers.

Amazon had to scale so quickly with its unprecedented growth that it has flaws in its warehouse practices. Not surprising. I think Amazon has enough smart people to turn this around and come up with a solution to keep employees motivated and happy while reducing churn. Previously change wasn’t critical, but now that they are close to a crisis, they have no choice but to turn things around.

Agree with what Steve mentions above. At its core, the answer is economics. Amazon needs to figure out how to provide more value to its employees in order to retain and attract (note, retain first) employees who can be valuable contributors for years.

Being customer-obsessed does not have to happen at the exclusion of being employee-obsessed. While I do not subscribe to the theory that Amazon’s level customer-obsession is flawed, it’s clear they have not applied the same focus to employee relations and creating the best employee environment and culture across their organization, as the numerous warehouse examples have shown. Sure, automation will be a factor at mitigating this situation, but it will not solve all of the challenges. Amazon will have to change their culture and develop an employee-obsession to counteract this labor crunch. Power has shifted to the employee workforce and Amazon is no different than any other employer in realizing they need to deal with these concerns now, not later.

Amazon continues to innovate because that’s one of their key Leadership Principles, as is being Frugal. This should include more automation in warehouses, likely reducing workers and finding ways to save cost. None of this should surprise anyone.

For anyone who has worked in a warehouse, especially in the hotter months, helping workers stay cool and safe can be a daunting task. It’s not an easy job moving product back and forth toward shipping bays, meeting deadlines no matter what the company.

Braintrust
"Amazon should apply the same level of focus on it employees as it does it the customer, then it would not have to worry about running out of people to hire."

"We really are running out of workers willing to work for companies that take advantage of them. It’s the legacy of COVID-19."

"Amazon has prepared for labor shortages by investing in automation, including robotics, to fill productivity gaps."