Will Americans finish this year’s Christmas shopping before Thanksgiving? 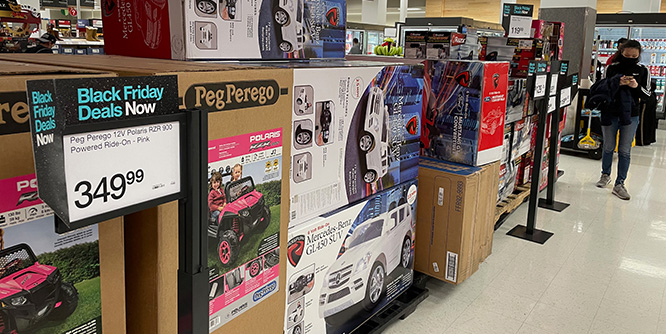 Holiday spending levels have been creeping well before Thanksgiving weekend for years but the steady drumbeat of warnings about inventory shortages has created even more urgency around shopping early in 2021.

The trend was evidenced by a number of recently released holiday forecasts:

Avoiding crowds and out-of-stocks has encouraged early holiday purchases in past seasons, although the biggest driver has been the lure of ever-earlier deals from retailers. In past seasons, “pre” Black Friday sales have kicked off as early as October. Major retailers, including Amazon.com, Home Depot, Target and Walmart, last year launched select Black Friday deals throughout November in part to ease traffic levels at stores at peak times with social distancing rules still in effect.

The news cycle yesterday was again flooded with stories of record cargo ship backlogs on both coasts and the threat of holiday out-of-stocks. Shoppers are being advised not to wait for better deals because they’ll be fewer this year given the escalating freight and other supply chain costs on top of lean inventories.

Initial holiday forecasts were roundly upbeat but many came with warnings about the need to  maximize inventories through a lengthy holiday selling season.

Darrell Rigby, a partner in Bain & Company’s retail practice, said in a statement on its holiday forecast, “The retailers that come out ahead this holiday season will proactively plan for supply chain headwinds, keeping marketing nimble and finding new opportunities to delight customers both online and in stores.”

DISCUSSION QUESTIONS: Do you agree that holiday consumer purchases in 2021 will shift much earlier, even than recent years? What challenges and opportunities do early buys combined with inventory imbalances create for retail in-store and online operations?

Please practice The RetailWire Golden Rule when submitting your comments.
Braintrust
"Yes, we’ll see earlier holiday shopping than in previous years, with a larger than normal percentage of purchases coming from online/app."

"Early holiday shopping has historically been driven by retailer promotions, however this year it will be driven by supply chain fears."

"I capitulated and started yesterday. #PeerPressure"

17 Comments on "Will Americans finish this year’s Christmas shopping before Thanksgiving?"

Due to the current supply chain issues, savvy shoppers will start buying much sooner or risk not getting products in time for the holidays. A friend of mine works for one of the major shipping companies and he advised all his friends to buy as soon as possible as delivery delays are expected to be a big problem around the holidays. Likewise, retailers are stocking up on inventory to help prepare for supply chain shortages. Early holiday shopping has historically been driven by retailer promotions, however this year it will be driven by supply chain fears.

Early shopping is definitely expected online – so the merchandise presented in the digital landscape should be merchandised and assorted with giftables first. Then upselling or “frequently bought together.” Automated recommendations should be mindful of gift-giving shopping as well.

The ongoing issues with the supply chain are a concern for retailers. The changes to Black Friday that the pandemic has fostered has lengthened the holiday shopping season to some degree. Retailers will have to balance volatile demand with inventory turn. I believe the key this year, more than in the past, will be to look for strategies that support flexibility in store inventory planning. Staging high demand items, improving logistics between fulfillment and store locations, and reserving final allocations to react to local spikes in demand will be critical this holiday.

Yes, we’ll see earlier holiday shopping than in previous years, with a larger than normal percentage of purchases coming from online/app. This combined with known supply chain issues around the world will make operational execution extremely tricky for many retailers. Of any year, retailers will have to be extremely creative and move with unprecedented speed to win. Those who pause to ponder a situation will likely miss an opportunity.

Most people will not shop sooner, there is too much else going on in their lives. Gifts will be fewer, and I predict this will be an “IOU Christmas.” Meaning, with supply challenges, more people will give promises of gifts than in previous years.

Retailers would be wise to adjust to this reality and make it easier for consumers to do so.

I completely agree. Consumers are not as organized as the above claims – for many, the absolute earliest they are ready to think about holiday shopping is Black Friday, where they’ve also been conditioned to expect the best deals.

On top of that, even the definition of “holiday shopping” gets a bit fuzzy with Black Friday, since many people shop for themselves that day as well.

RetailMeNot’s survey of 1,083 consumers and AlixPartners survey of 1,000 consumers should not be the information we make a determination based on. Those numbers could be me asking my friends on Facebook when they plan to Christmas shop this year.

I do know that there are lots of things happening at retail that will result in many out of stock situations, but I also know that there are consumers who may have recognized what’s happening on the sales floor, but who are not fully aware of what is actually happening worldwide. I think that if you are the kind of person who finishes their shopping before Thanksgiving you will do that again this year, and if you tend to procrastinate you will do that this year as well.

Sure, sales will shift earlier just like they have for years. But time will tell how accurate the well intended survey answers about the summer actually pan out. It will be fascinating to see how the sales versus margins scenario plays out. All of the sudden inventory availability rules and not lowest price. It’s an opportunity for retailers to back off of price driven strategies.

There is already evidence that holiday shopping is shifting earlier and I think this will continue as we move into the golden quarter. This is especially so for online, where consumers will be keen to get products delivered early rather than face the problems of shipageddon. However we will still face a last minute crunch – especially so if product availability is bad and people are having to wait to make purchases. What this adds up to is incredible pressure on retailers – and front line staff – during November and December.

It’s 88 days until Christmas. The holiday countdown has become national news. Since the media tells me every day about the impending failures of the supply chain and the ships stuck in port due to no labor to unload them, it’s no wonder that some people are feeling the pressure to get started early. I capitulated and started yesterday. #PeerPressure

Given the widespread knowledge of the logistics issues and the proliferation of e-commerce, Christmas will DEFINITELY come early for most shoppers. BUT this is America and we love shopping late and, at the moment, we (kind of) miss stores too so I would expect last minute store shopping to be strong. Not basket size, just shopping for last minute odds and ends. +50 percent e-commerce sales is right around the corner and this could be the kick-off of numbers like that.

While some shoppers will heed the warnings and purchase earlier, there is a large segment of the population that will still wait until the last minute to get their shopping done and face frustrations when they can’t get what they want. Savvy retailers will plan for this and promote those items that can be purchased and delivered in time for the holidays.

It’s going to be a split scenario. The people who are the usual early shopping suspects will be aware of the potential inventory shortages and adjust their behavior accordingly (they will shop earlier). The people who usually shop in November and December will be consistent with that behavior (though they might be more disappointed/frustrated this year).

Absolutely not. Shopping is a great American pastime. Yes, there is going to be a surge of gift shopping early, because retailers will force it with promotions which will lead to further in-store purchases. But the escape for customers will remain, and that will turn into a lot of unintended purchases — a surge of sorts. IT WILL BE THE GREAT ESCAPE from the woes of the pandemic and store closures and on and on.

I think Black Friday will see a high water mark for early Christmas shopping but being optimistic, I think 2021 will see a resurgence of December in store shopping for whatever is left in stock at that time.

We just conducted a research survey on holiday shopping plans across 500 U.S. consumers (results still to be published) and a full 28% said they planned to start their holiday shopping before November and 22% said they plan to do more shopping online than in-store this year. So, we expect to see a lot of focus on store fulfillment this holiday season.

I do not have faith. I do believe that a smaller segment — 25% to maybe 30% of consumers will shop early, but I believe that there will be a LOT of procrastinators who may hear the warnings and think “Oh I am sure they will have lots of stuff!” and put it off — and perhaps be disappointed?

Braintrust
"Yes, we’ll see earlier holiday shopping than in previous years, with a larger than normal percentage of purchases coming from online/app."

"Early holiday shopping has historically been driven by retailer promotions, however this year it will be driven by supply chain fears."

"I capitulated and started yesterday. #PeerPressure"