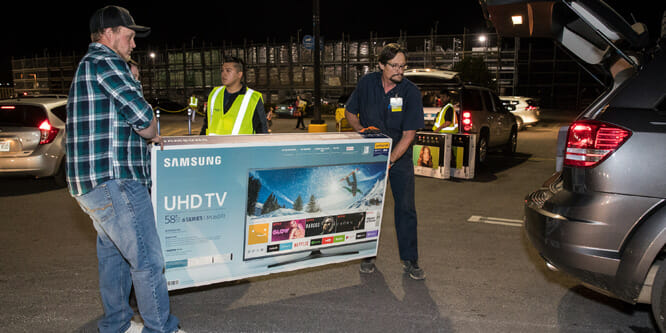 Some customers weren’t entirely happy at Walmart this Black Friday: the chain ran out of some discounted inventory before the retail holiday’s official start.

Walmart customers began encountering out-of-stocks on some of the store’s e-commerce products early on Thanksgiving Day, according to CNBC. Walmart kicked of its online deals at midnight on Thursday and customers complained on social media that some items were sold out by 2 a.m. Shoppers on Black Friday morning found themselves out of luck on items such as boys pajamas and particular LED televisions.

The rise of e-commerce has changed the shape of Black Friday in recent years. Customers who aren’t interested in dealing with holiday crowds and long lines at physical stores have opted to shop at home. Walmart’s early Thanksgiving sellout raises the question if Black Friday has begun to diminish in significance as a draw for physical shopping as online promotions now start before Thanksgiving and bleed into Cyber Monday and beyond.

Online shopping on Black Friday is continuing to grow. This year’s sales reached $5.03 billion in the U.S., according to an Adobe Digital Insights study quoted in USA Today, representing a 16.9 percent year-over-year increase. Online shopping on Thanksgiving Day was way up as well, hitting $2.87 billion and increasing 18.3 percent. As of 10 p.m. last night, Adobe was projecting that Cyber Monday sales would hit an all-time high, reaching $6.59 billion by the end of the day, a 16.8 percent year-over-year increase.

E-commerce as a whole has proved to be a double-edged sword for Walmart. On one hand, the company is investing in its online presence to compete with Amazon.com, but on the other the costs associated with e-commerce might offer incentive to put a cap on its deals even during the holidays.

Walmart has been taking steps to push customers into physical stores to save on shipping costs and increase impulse buys. This year, the retailer has added a discount for items purchased through BOPIS and, in some instances, placed lower in-store prices on the website next to the online ones for customers to compare.

In-store traffic declined 1.6 percent on Black Friday and Thanksgiving Day combined, according to a ShopperTrak study quoted in USA Today.

DISCUSSION QUESTIONS: Do you think consumers are more willing or less to accept out-of-stocks during peak holiday deal days than they are the rest of the year? Will out-of-stocks on Thanksgiving Day negatively impact Walmart’s overall holiday performance? How do you see Walmart faring with its online performance this holiday season?

Please practice The RetailWire Golden Rule when submitting your comments.
Braintrust
"Ultimately, it’s a hard lesson that they will bounce back from."

"Getting stock right, especially during the holidays, is tough but that’s what smart retail is all about."

"If one is randomly shopping, no big deal. If one is looking for something specific, an online out-of-stock sends them right to Amazon. That hurts."

15 Comments on "Will early out-of-stocks throw off Walmart’s holiday momentum?"

Consumer expectations have never been higher, and stock-outs during peak holidays are an unforgivable, cardinal sin in retailing today. Stock-outs are conversion killers and naturally this will have some impact on Walmart sales but, the question is, by how much? If Walmart is able to switch buyers to substitute products the impact may be modest, but in today’s hyper-competitive, connected retail world, there are plenty of other places to buy and when a shopper leaves the store or the website, there’s a good chance s/he may not be back.

Unless the out-of-stocks were exclusive items, Amazon was the most likely recipient of Walmart’s shortcomings. Of course, shoppers unable to get their intended purchases done where they want at the price they want are disappointed and/or angry, but the ease of changing merchants trumps loyalty most of the time –especially for price-conscious or deal-focused shoppers.

The balance between price, inventory and demand forecasting is a tenuous one, not for the faint of heart, so no retailer is going to get it right all the time. Walmart is no slouch, but the giant’s e-commerce presence has only been a serious pillar of their merchandising for a short period of time, so ultimately, it’s a hard lesson that they will bounce back from.

I agree with you Max. It might be OK during the early holiday season sales. But not on much more than the early hot sellers. Out-of-stocks have always been a problem with the Walmarts in our area.

Out-of-stocks are one thing which retailers dread and try to avoid as much as possible by keeping as much inventory as possible. Even then there are such scenarios, but out-of-stocks are directly related to sales and customer experience. So there can be no question of if out-of-stocks will negatively impact Walmart holiday performance or not. It will, obviously!

Seeing the trend, Walmart has performed far better than Amazon in online business in the last quarter but this hiccup can cost Walmart some loss of revenue and maybe some customers if they got products on Amazon or any other retailer.

I think such a scenario occurred because Walmart under-anticipated the online business, which will be a lesson for them for the upcoming Christmas!

Consumers get frustrated and annoyed at out-of-stocks, especially after retailers hype up deals on certain products. They are arguably less forgiving around the holidays when there is more of an urgency to purchases.

While this is not great for Walmart, I still expect it to do well over the holiday period as a whole.

It comes down to customer service in the face of these outages. If Walmart promised to ship the missing item to the customer for free, no problem! If the retailer made them come back to the store with a rain check, problem. If Walmart didn’t offer the shopper any way to get the item at the sales price, big problem. If the shopper had to wait in a long line to get an unsatisfactory response, giant problem!

While shoppers expect out-of-stocks during peak holiday deal days, they certainly don’t accept them as business as usual anymore. They will continue to shop until they find what they’re seeking — regardless of the channel. Shoppers don’t select channels, they just shop — and will utilize the easiest most rewarding channel(s) to fulfill their journey.

These entries are filled with this topic and the issue never gets resolved. The retail supply chain was, and continues to be, broken. We live in a nanosecond digital world and shoppers expect instant gratification and as such will use whatever digital and/or analog means to placate their need to accomplish their task. Brands and retailers alike need to fulfill their journey — regardless of their path of choice.

If one is randomly shopping, it’s no big deal. If one is looking for something specific, an online out-of-stock sends them right to Amazon, and that hurts. Will they ever come back? Amazon has set consumer expectations so high that few can meet them. Unless online competitors understand that, few will succeed.

That’s true about consumer expectations for a large swath of shoppers and it’s certainly the Amazon hype, but there are a number of meaningful cracks in the Amazon facade that the press doesn’t report which consumers absolutely notice. I would not doubt that Amazon had out-of-stocks our undersold opportunities, it’s simply masked by their “only x remaining” tactic.

Getting stock right, especially during the holidays, is tough but that’s what smart retail is all about. Getting it wrong is going to happen so it comes down to how it’s handled. An automatic wait list with free shipping if you’re shopping online. A way to get wait-listed with your choice of delivery, without waiting in line, if you’re in-store. Providing a great experience, that’s what it’s all about. For my 2 cents.

Out-of-stocks are never welcome by shoppers, especially during the holiday shopping frenzy. Walmart should have planned and expected this, so while it’s most likely that shoppers experiencing out-of-stocks over the Thanksgiving shopping weekend went to Amazon to make their purchase, I don’t see this impacting them over the duration of the season. However, this isn’t something you can recover from in the eyes of most consumers as the shopping season goes on. Once late December arrives, nothing will frustrate a shopper more than and out-of-stock! This is where a good recommendation engine online can save the day and suggest alternative products. Replicating this in-store requires well-trained associates to redirect shoppers to alternative products before the frustration sets in. Walmart has the potential to overcome this so we will see how the numbers look at the end of the season.

I agree on the point everyone is making on customer agitation on “item outs.” We have polled Thursday/Black Friday customers this week, and some were thrilled — they got that great deal they wanted. Others sighed as they admitted they “were late” and missed. Previous Black Friday events over the years have trained customers that there is always the chance they won’t be successful on those “very special” items, but that’s the game, and they know it. However, being out of stock on many in-store items is a loss. Most will not hesitate to find their treasure elsewhere. I think wait lists and promises will work on the few, but many know of numerous channels to flock to in finding what they want, and that’s a lesson most retailers don’t want taught.

Back to Walmart: so basically they’re in trouble or might be because they sold out quickly? I understand out-of-stock’s are practically a tradition for them, and they seem to have survived it in the past. I think they will this year too.

Yes. How much simpler does it get? Out-of-stocks are the 3 worst words in retail. Walmart needs to ensure that promotional products are available. Nothing else could be simpler.

Braintrust
"Ultimately, it’s a hard lesson that they will bounce back from."

"Getting stock right, especially during the holidays, is tough but that’s what smart retail is all about."

"If one is randomly shopping, no big deal. If one is looking for something specific, an online out-of-stock sends them right to Amazon. That hurts."