Will food save the mall? 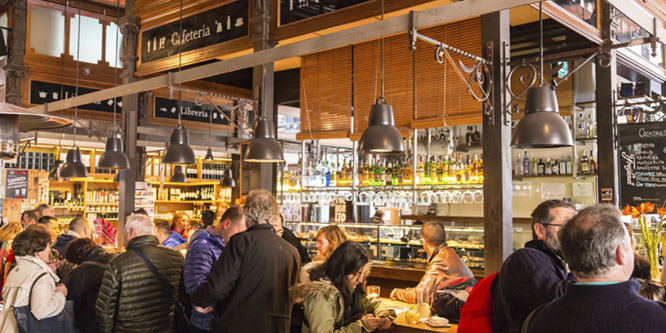 With the foodie culture currently eclipsing any fashion craze, many malls are revamping their food courts to more closely resemble trendy urban food halls as a way to drive traffic.

In a lower-key approach, Santa Monica’s Third Street Promenade is undergoing a $7 million upgrade. Renamed the Gallery, the food court will feature a mix of indoor and outdoor seating options on two levels, more natural lighting and other spruced-up details.

Instead of cheap eats like McDonald’s and Chinese Gourmet Express, the mix is being upgraded to include local fast food truck fare and better-for-your fast casual, with only Subway returning as a traditional tenant. Prices range between $7 and $15 to fit with the expectations of beach tourists visiting the spot, according to QSR Magazine.

On a more opulent scale, James Beard Award-winning Chef Michael Mina will open a multi-concept gourmet food hall called The Street at the Beverly Center as part of a $500 million overhaul scheduled to be completed in 2018. Including sweeping views of downtown Los Angeles and the Hollywood Hills, The Street will feature offerings from Mr. Mina and approximately 15 to 18 disparate concepts in a casual, market-style environment.

“The fare will be healthy, the atmosphere casual and the overall experience will be like no other in LA,” said Mr. Mina in a statement.

Ironically, while the upgrades are designed to help draw shoppers, food court mainstays such as Cinnabon and Auntie Anne’s are investing in more growth outside of malls due to anemic mall traffic.

The new mall food halls may have to compete with the largely stand-alone food halls that are thriving in many cities. Like malls have traditionally done, food halls in many areas are acting as community gathering places.

“The customer no longer has to go to the greasy pizza shop across the way,” celebrity chef Mario Batali and co-owner of New York’s gourmet Italian food emporium Eataly, told CBS News about food halls. “The customer can come in here and on five different days, eat at five different chefs’ visions of what this food can be.”

DISCUSSION QUESTIONS: Can food become a significant traffic driver for malls amid the ongoing foodie craze? Are food halls a practical concept for all malls or just upscale malls?

Please practice The RetailWire Golden Rule when submitting your comments.
Braintrust
"Making the mall into a food court is a mistake. Eaters go to one; shoppers go to several."

"To keep the malls going operators need revenue and they can be agnostic about where it comes from."

"Spending $15 for lunch in a mall is going to cut into spending in the stores."

16 Comments on "Will food save the mall?"

Making the mall into a food court is a mistake. Eaters go to one; shoppers go to several.

I would think it’s more appropriate for upscale malls. The goal of a food court, traditionally, has been to keep shoppers shopping and not leaving the mall when they get hungry. Spending $15 for lunch in a mall is going to cut into spending in the stores. I’m not sure upscale eateries are enough to bring shoppers into the mall except in the wealthiest areas.

The problem with mall traffic has nothing to do with food!

I don’t think so, unless it is a part of a comprehensive remake that includes new retail stores and actually filling the mall up, since half-empty malls do not draw traffic. There are tons of ideas on mall makeovers and only a few will do it successfully — in the high-end foodie districts, not in aging rural or suburban malls.

There are enough food concepts, both upscale and affordable, to generate compelling reasons to draw shoppers to malls. Should these foodie courts be the sole reason to go there? Perhaps. However anchor stores, and not always necessarily department stores, should also be key drivers of traffic, too. It is the overall experience that brings people in. Regardless of the luxury level of the mall, there are some great food stores operating now to help bring vibrant lives to malls.

We have several upscale foodie places now in the Atlanta area and they do have some retail, however the food is the draw. It will be interesting to see how well the retail does a year from now. I’m thinking, not so well.

As was mentioned yesterday, there are many ways mall space can be revamped and yes they include food but that is not and will not likely be the main draw, and certainly not upscale food. The mall as a destination for entertainment is much more likely and means a balance of retail, food, fun, activity and places to hang out.

Food halls, if done properly, represent a real opportunity for malls of all sizes and demographics. However, upscale malls can use a real foodie approach to drive mall traffic. There are two examples that malls, particularly upscale malls, should consider in designing their own food hall. First is foodlife, located in Water Tower Place in Chicago. According to its website, foodlife is described as follows: “foodlife is an urban food hall with 14 distinct kitchens. With quality food made from scratch daily for breakfast, lunch, and dinner to dine in or to go, you will find fresh, fast choices all in one convenient location.” Second is Eataly (New York and Chicago). The New York Times has described it as a “megastore” that “combines elements of a bustling European open market, a Whole-Foods-style supermarket, a high-end food court and a New Age learning center.” Each of these innovative food halls has attributes that traditional malls can borrow, adapt and adopt to their respective customers and environment. Success leaves clues. In the words of Picasso, “good artists… Read more »
3
|
0
-   Share

Well, airports finallly figured that out, but they have a captive audience whom the airlines had been starving for years in this country.

Foodies might be curious about celebrity chefs, but they can find them already in nicer settings. And food trucks go to where people already are, not vice versa.

Last bit of shade on this bright idea — Hollywood influences fashion trends, which this sounds more like than a food trend.

“Food halls” are a phenomenon unto themselves. Malls are certainly a convenient place to house them and there’s no reason they should not. But the key to drawing consumers (who won’t necessarily be “shoppers” in the traditional retail sense) to malls is offering a variety of entertainment choices. Food, theater, miniature theme parks, whatever. To keep the malls going operators need revenue and they can be agnostic about where it comes from. Attracting consumers into your store and turning them into shoppers is still the retailer’s job.

Let’s turn this idea upside down to become customer-centric rather than acting as product/category opportunists.

Ultimately any destination center (malls, large stores, decorative centers, etc.) will become part celebration of life, part of fulfillment of desires and part country club/community center where best prospects feel comfortable. Anchors as we know them will change. Reasons for visiting the shopping areas will change, too.

The question is, who will figure it out first? Food is a tiny ingredient.

Easton Town Center, a mixed use development (and way ahead of its time) here in Columbus has been successful mostly because they have options: food, entertainment, retail, all in a ‘real’ town environment. Three other, more standard, malls have closed here.

I was just in Shore Ditch, East London, same thing: part food, part retail, part gathering space — and it was packed on a Wednesday afternoon.

This is the way of the future, everyone — gathering spaces with a lot of options, including retail. Otherwise, why come at all? Wouldn’t it be more comfortable to just stay at home, scan the globe for what you’re looking for, press a few buttons and be done with it? Sure it would … unless you can get all the benefits mentioned above. In 2025, we’ll look at the original idea of a “mall” as very archaic thinking. Make that 2020.

Yes it can be a significant driver, but there is a caveat. Shopping centers like Santa Monica’s Third Street Promenade and the Beverly Center are not just upscale malls, they are destinations where the food court is part of the experience.

Consumers visiting destination shopping centers are looking for several hours or a day worth of entertainment and that includes a food experience beyond the traditional QSR fare, and even higher price points.

Is there really “an ongoing foodie craze”? Or more to the point, if people still generally eat only three meals a day, what will be driving traffic between meal times?

Somewhat different than a pure restaurant concept, of course, is an actual marketplace (selling food), which presumably answers this question, but I’m not sure how much of a market (no pun intended) there is for this concept outside metro areas. In short, if the operators of failing malls think “food is a (one size fits all) “salvation,” they’re probably going to be disappointed.

If the mall has redeveloped into a mixed use development with a wide variety of experiences, food included, it might do ok, but not likely food will “save” the mall. The mall is just so yesterday in terms of thinking … and many are not doing so well. Need to think differently about this and move away from the aging concept of “the mall” and focus more on “the experience”!

An upgraded food plaza experience would be welcomed by many enclosed mall shoppers, but I doubt it would generate many “food-first” trips, due to the time it takes to drive, park, walk in and return.

Since we’re talking about higher-than-fast-food price points here, we might speculate that upscale food vendors might more easily cover the rent, if they can keep up the frequency.

For other mall merchants, the positive could be keeping deep-pocketed shoppers in the mall longer, instead of losing them to the Applebee’s across the boulevard. At locations with movie multiplexes, it has potential to encourage more date nights.

Braintrust
"Making the mall into a food court is a mistake. Eaters go to one; shoppers go to several."

"To keep the malls going operators need revenue and they can be agnostic about where it comes from."

"Spending $15 for lunch in a mall is going to cut into spending in the stores."