Will ‘guests’ love Target even more as Circle members? 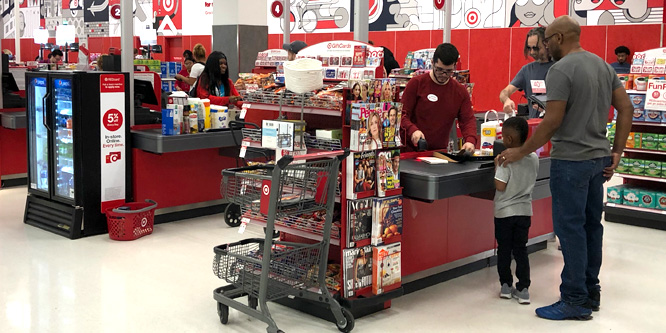 At a session Sunday at the NRF Big Show, Rick Gomez, EVP, chief marketing and digital officer, Target, explained why he decided against using points as the incentive when launching Target’s loyalty program last year.

“Points-based programs are great for some brands,” said Mr. Gomez. “But for a company that has been built around three magic words — “I Love Target ” — a point-based system was too limiting; really, it was just too transactional.”

Target Circle, which launched last October, has some transactional elements, including a one percent discount on all purchases and personalized discounts. But in launching Circle, Target ended a pilot of Target Red Perks, which offered 10 points for every dollar spent in-store or online. Once a member reached 5,000 points, they received five percent off their entire shopping trip at Target.

One of the goals in launching Circle was to simplify rewards. Sign-up is free and only requires a phone number. Benefits start immediately. The one percent discount versus accumulated points makes the rewards easier to understand.

As part of the Circle rollout, Target rolled together the Cartwheel personalized-discounts program, social-savings app and the company mobile app into a single app. The retailer made its Red Card and gift cards accessible through the app, as well.

Mr. Gomez said Circle also provided “the ability to personalize in a more meaningful way” that a points-based program “prevented us from unlocking.”

Circle features Cartwheel’s best personalized offers and redemption rates, which are running twice as high as the standalone Cartwheel app. Customers are also able to vote on which charities their local store should support. Since October, more than $2.4 million has been donated to support almost 900 organizations nationwide.

“When our brand is at its best, we’re never complicated or transactional. We’re easy and inspiring. We’re personalized and intuitive,” said Mr. Gomez. “On our best days, Target is a brand that makes you feel good.”

DISCUSSION QUESTIONS: Does Target’s Circle program seem positioned to drive more loyalty than a typical points-based program? Do points-based loyalty programs make more sense for some retailers but not others?

Please practice The RetailWire Golden Rule when submitting your comments.
Braintrust
"For regular Target users, it is a must-have and an incentive to divert as much spending as possible to Target."

"This strikes me as useful if you are a frequent guest at Target, but doesn’t seem to have much that would bring an infrequent shopper in."

"...it appears that I am punishing my best customers to appeal to the 80 percent who might spend less than $500 … maybe I’m missing something."

15 Comments on "Will ‘guests’ love Target even more as Circle members?"

Target Circle is simple to use, gives genuine rewards (i.e. cash that accumulates and can be used as a discount against any purchase), and combines the discounts that were previously part of Cartwheel. In addition to this, there are occasional perks such as special savings or percentage discounts off one shopping trip. For regular Target users, it is a must-have and an incentive to divert as much spending as possible to Target. For the company, Circle generates a lot of rich data about customer behavior and preferences.

First, there’s a difference between loyalty and repeat business. Target’s Circle program will create repeat business. It’s a marketing and/or a discount program. Now there’s nothing wrong with that. What will drive loyalty is what happens in addition to the discounts, meaning how the customer feels about the experience. Friendly and helpful employees (and an overall good CX) will help drive the experience. And when you combine that with the points or discount program, you have a winning combination that can turn repeat customers into loyal customers.

I have been a Target Circle member (and a Cartwheel member before that) for a while now, and so far I have not been offered anything that I can use on the next trip when I do get to a Target store.
I am going to guess that Target will hone the program to be more robust for customers that shop Target on a frequent basis.

This strikes me as useful if you are a frequent guest at Target, but doesn’t seem to have much that would bring an infrequent shopper in. To many people it’s about price and selection and in many cases Target is more than 1 percent expensive (or even more than 5 percent expensive with my RedCard) compared to Walmart.

Any loyalty program should have 3 key pillars:

I believe Target has started off on the right note. The key to adoption is the value that the customers perceive. This has an element of Cashback and earned discounts – which is important for consumers. I am sure there will be refinements, with tiered memberships that provide free delivery, curbside pickup, free shipping etc. But they need to get a critical mass of existing shoppers into the basic rewards program before they monetize further.

Give me the 1 percent and don’t bother me with anything else.

How about that. Target is working on building actual emotional loyalty, not just engaging in a transactional quid pro quo. Turns out there’s a difference between loyalty and rewards. It also means that Target doesn’t automatically give away five points, or in effect turn their best customers into break-even customers at best. Reminds me of Costco, where a huge percentage (100 percent…?) of the annual profits are derived from membership fees. Target doesn’t have the benefit of banking those kinds of fees.

I like the simplicity of Target’s Circle program. That said we need to be cautious about any loyalty programs. Research shows that loyalty programs too often reward people for shopping they would do anyway and without extending the average retention of shoppers. Other research indicates that the highest spending consumers are also the most market savvy — hence most likely to shift spending to another brand.

Simple is better than complex. Direct, easily recognized consumer benefit is better than bundled value marketing. Beyond that everything else is just marketing. Consumers see any of these programs as a.) discount schemes; and/or b.) ways to get closer to what the products “ought” to cost. Since the attraction is ultimately transactionally based, I still see this as a way to encourage frequency rather than to build true brand loyalty.

I believe the program is good for Target but not necessarily good for their customers. Unless I’m reading this wrong the 5 percent goes away and everyone gets the 1 percent. If I apply the 80/20 rule (20 percent of my customers account for 80 percent of my sales) it appears that I am punishing my best customers to appeal to the 80 percent who might spend less than $500 … maybe I’m missing something.

Target seems to understand that loyalty cannot be bought with points. The combination of personalization, social savings and content is what loyalty programs were intended to be — not just another way to buy an incremental transaction but a way to create and maintain a relationship.

I love the design of the Target Circle program because it provides value to the customer while being consistent with the Target brand. Instead of focusing on providing points or other incentives for customers to shop at Target regularly, the program focuses on reminding customers what they love about Target and why they love to shop there.

The goal is to strengthen the emotional connection that is at the heart of true loyalty.

The simplicity of Target’s Circle program makes sense to make it easy for customers. The downside of not being a points-based system is that it doesn’t spur incremental purchases when a customer’s spending limit thresholds that might earn extra benefits.

At the end of the day, loyalty is defined by what the shopper does when it isn’t a discounted transaction. Programs that drives repeated purchases through discount does not promote loyalty — once the points are gone shoppers will stop. Target needs to make sure the rest of customer experience is superior to competition so that people would visit and shop.

I think the fact that you can vote on a charity for your local store will resonate well with the consumer that is looking for purpose within their experience. More and more consumers are searching for businesses that have a purpose and this is an active way of engaging with that demographic that cares, I like this approach and looks like their customers do too.

Braintrust
"For regular Target users, it is a must-have and an incentive to divert as much spending as possible to Target."

"This strikes me as useful if you are a frequent guest at Target, but doesn’t seem to have much that would bring an infrequent shopper in."

"...it appears that I am punishing my best customers to appeal to the 80 percent who might spend less than $500 … maybe I’m missing something."