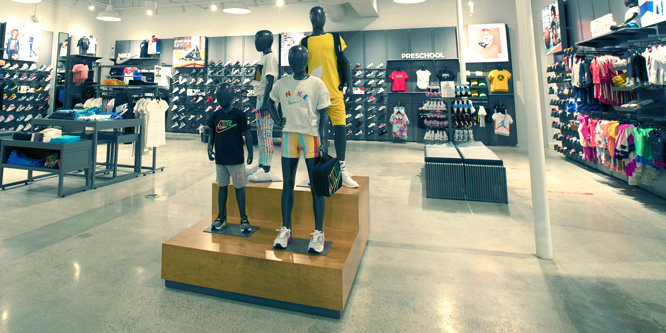 For its first California Power Store, Foot Locker has committed to hiring local by partnering with the City of Compton to recruit talent within a five-mile radius of the location.

Power Stores are significantly larger than Foot Locker’s flagship stores, with a focus on tapping into the local community.

For the new 12,800-square-foot store, two local artists designed custom artwork for the interior and exterior of the location. The store will feature a selection of limited-release products from local brands and an activation space to host events for local “sneaker-obsessed” fans. Foot Locker has also committed to hosting neighborhood clean-ups and maintaining a community garden.

Emphasizing local hires has also been a feature at Foot Locker’s six other Power Store locations globally, although this marks the first time the retailer has partnered on initial recruiting efforts.

“Compton is a passionate market for sneaker culture, and we look forward to creating immersive brand connections, from the local store staff, to the in-store experiences and products we offer,” Bryon Milburn, SVP and GM of Foot Locker U.S., said in a statement.

Foot Locker is taking a page from its closest vendor partner, Nike, whose Community Store concept has a primary goal of hiring at least 80 percent of its team from within a five-mile radius. Nike’s Community Store associates volunteer their time to local nonprofits and to the company’s broader sports-related efforts. They are also empowered to award grants from the store to local organizations.

Publix and Wegmans are two chains in the grocery space that talk up local hires when opening stores, but many retailers don’t discuss putting a priority on hiring local.

The benefits of hiring locally include being seen as supporting the community, and attracting other locals as customers and later as job recruits. It is also seen as making it easier to vet candidates and reduce staff turnover. The downside is limiting the pool of potential candidates.

DISCUSSION QUESTIONS: Should hiring local be a priority for retailers, and is it a feasible goal for most? What are some tactics for finding local talent?

Please practice The RetailWire Golden Rule when submitting your comments.
Braintrust
"It’s definitely a selling point as these employees should know their customer base better than someone not from the community."

"Aren’t we missing the elephant in the room? Hiring local people in Compton means hiring people of color. And that’s a very good thing."

"Research shows that the closer to a store that hourly employees live, the more likely they are to stay and have better attendance."

I really think this is an interesting initiative. Tapping into a workforce in close proximity to stores has a number of advantages as noted, but it’s also extremely practical — offering employees reduced commutes. Given the significant job losses in the retail industry – and other industries — it should be very easy for Foot Locker to attract talent. It also doesn’t hurt that their flagship stores and products are especially compelling to workers of a certain age.

Hiring locals can probably help retailers create more of a sense of community, especially if staff know and understand their shoppers. It is also generally a good policy to economically support the areas where business is conducted. However it is not a panacea. So many other things need to be right – products, service, store location, prices, etc. – for a retail concept to work. Ultimately that means having the right mix of talent and people with the right attitude is more important than just having locals. If retailers can get the two to align then that’s great. If not, they need to go with the hiring policy that works best for their business.

I think it is very helpful to instill a sense of community for the business. It’s definitely a selling point as these employees should know their customer base better than someone not from the community.

This is thinking out of the box. It is probably more to the benefit of the community than to the retailer. The retailer has to commit to searching hard (or partnering with community organizations) for the talent from within the community. This is going to be a paradigm shift in culture and social responsibility. Yes retailers will benefit in countless ways. But communities will benefit more with jobs, short commutes, a path upward, dignity, reduced time to get into mischief, and on and on.

Hiring local in and of itself is not necessarily an advantage. However if the retailer takes advantage of the local hires by learning about the market, adapting to the local market, working to be part of the community, and developing a career path for the local employees, then the focus can have great benefit.

Good thinking provided they manage innovation and marketing from “the bottom up.” Hiring folks locally is a great idea, but it doesn’t do much good — and maybe does a lot of harm — if you don’t treat the new hires well, actively listen to them, follow their suggestions, and reward outstanding contributions. Sneaker culture is all about what happens in the streets and clubs, not in some boardroom.

Aren’t we missing the elephant in the room? Hiring local people in Compton means hiring people of color. And that’s a very good thing.

I’m not sure if this is a real option for retailers to do much hiring outside of their local community. The pay scale isn’t enough to entice many folks to travel much of a distance for most retail jobs. I think offering a livable wage, a career path like a management training program, options to move to the home office for corporate positions, tuition reimbursement and perhaps benefits are all tactics to attract local talent.

Any retail that does not look at hiring local has already missed the boat and is looking at hire turnover. Research shows that the closer to a store that hourly employees live, the more likely they are to stay and have better attendance.
The specifics of the area will help determine the recruiting strategy. Here are some quick ideas of how to effectively recruit.

In my experience, the majority of retail store staff is comprised of part-time workers. And with the exception of rural areas, that majority lives easily within a five-mile radius of the store. Of course the more intimate your staff is with the local community, the better the connections that can be made with shoppers. However I believe it is even more critical to have product and service knowledge to ensure the staff knows more about the products than the shopper does — which is a real problem when it comes to customer service.

I love this and love having the staff more closely resemble the shoppers. Not sure why it would be unfeasible.

Look no further than Tractor Supply Company. When you walk onto one of those stores (for their target customer), they see people just like themselves. This enables a great level of empathy between the brand and customer, as well as increases the probability that the service provider actually knows what the customer is looking for. Does this produce benefits? Just look at the enterprise value creation by TSC over the past 70 years. On a side note, I remember shopping periodically at Spencer’s, the exotic gifts retailer, over the years and while the majority of employees there did not seem to have much in common with me, I think they had a great deal in common with their target audience. In Europe, the cost of multi-nationals taking profit out of local communities has been tremendous. People still shop at the multi-nationals (in many cases begrudgingly) because of value, but I believe would flock to local merchants if the selection and cost was in line with the behemoths. This looks like a smart move by Footlocker… Read more »
0
|
0
-   Share

It’s a great idea that will require a commitment by the retailer to pull off since there are varying degrees of available population around different locations, making it more challenging in some places. The upside, though, of hiring people that know and care about their local community should be a big positive, as long as the retailer does a good job with the blocking and tackling of treating employees well.

Braintrust
"It’s definitely a selling point as these employees should know their customer base better than someone not from the community."

"Aren’t we missing the elephant in the room? Hiring local people in Compton means hiring people of color. And that’s a very good thing."

"Research shows that the closer to a store that hourly employees live, the more likely they are to stay and have better attendance."