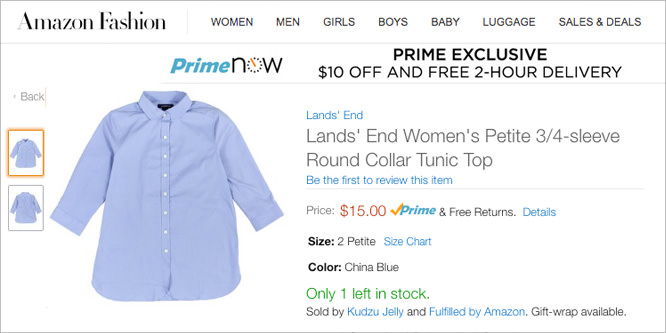 If you can’t beat ‘em, join their marketplace. That appears Lands’ End’s plan with the announcement the company will begin selling its Canvas line along with other items from its apparel and footwear offerings on Amazon.com by the end of the month.

Lands’ End, which has been more up than down since its spinoff from Sears Holdings in 2014, comes off a down quarter. The company is blaming its same-store sales decline of 2.5 percent on its decision to limit promotional discounts.

Speaking on an earnings call with analysts last week, CEO Frederica Marchionni said Lands’ End is “pleased to be partnering with Amazon” and that being on the site would enable the company to open up “an additional channel for us to introduce consumers to our new brand and expanded category.”

Amazon’s increasing popularity as a fashion destination combined with Lands’ End challenges growing its business led Ms. Marchionni to take the step of siding with an erstwhile rival. She made the decision, according to a Wall Street Journal report, after receiving assurances from Amazon that it would adhere to Lands’ End pricing. Even so, Lands’ End is hedging its bet by limiting the selection of items being offered.

Interestingly, this is not the first time that the Canvas line has been linked to Amazon. In the spring, Lands’ End launched an annual subscription program with similarities to Amazon Prime called Canvas by Lands’ End Circle Membership. Customers paying $50 would receive a 20 percent discount on all regularly priced merchandise, 10 percent off sale and clearance merchandise as well as free shipping and returns.

DISCUSSION QUESTIONS: Do you approve or disapprove with Lands’ End decision to sell a selection of its clothing on Amazon.com? What do you see as the pros and cons of the deal?

Please practice The RetailWire Golden Rule when submitting your comments.
Braintrust
"If they focus on product and brand, then leveraging key partner channels for reach and efficiencies may be a viable path."

"Lands’ End is wise to test the waters with Amazon by offering only a limited set of its products for the initial period."

"It’s all about the brand or you become a commodity. Lands’ End had a well defined brand that was blurred by becoming a Sears house brand..."

17 Comments on "Will Lands’ End hit pay dirt on Amazon?"

Minimum Advertised Pricing (MAP) policies do not work. They have an even lower chance of working with Amazon given its past record. Lands’ End will inevitably see its margins falling as a result of this decision.

However, I agree that you must join Amazon since fighting it is utterly useless. Do not try to stop a river, as Zen wisdom says.

Could any retail clothing chain have become less relevant and interesting over time? Except maybe the old Banana Republic (ah, for the good old days). They need to sell whatever they can sell wherever they can sell it.

Lands’ End is likely to realize some benefit in leveraging Amazon. The brand could benefit from two areas of Amazon’s strength — audience and efficient operations/logistics. Now, if Lands’ End can focus strategically, they may be able to get some traction by enhancing the brand perception and finding a lifestyle story to connect with consumers. If they focus on product and brand, then leveraging key partner channels for reach and efficiencies may be a viable path.

By 2017, Amazon may outpace Walmart as the biggest seller of apparel in the U.S. It’s hard to argue with its legitimacy and power if you’re a label trying to rebuild your volume base, not just your brand equity. Remember, Lands’ End was tarnished by its years-long association with Sears (including its shops within Sears stores), so it’s got nowhere to go but up.

Lands’ End has been grappling with its brand since leaving Sears. By selling one line of its products on Amazon, the brand is hoping to 1. gain relevance and 2. introduce itself to a new set of consumers. By using only one line on Amazon, Lands’ End is trying to entice consumers to try its full line of products on its own website and through its catalogues. I can’t fault Lands’ End management for taking this step.

The way to a complete Amazon victory is for every retailer to capitulate and surrender their sales channel to Amazon’s. Here’s another, and unfortunate, example. Who’s next?

Cathy — well said! It’s kind of a sign of desperation to make a pact with your competitor while bowing before them.

Exactly! Selling on Amazon is the de facto plan B of brands that are becoming less relevant to consumers.

I think eventually this will backfire for Lands’ End. Target and Toys “R” Us have been down this path (in different ways) before and it didn’t go as they expected. Amazon is on its own trajectory and I can’t believe that they see any benefit from dragging along an average brand. Amazon will do what benefits Amazon including making decisions that effectively torpedo this association if and when there’s more in it for them than maintaining a Lands’ End “partnership” of sorts. If anything, Amazon will use this association as a yardstick to see what its customers are interested in from the Canvas collection and then bring in their own competitive products. They do it with small marketplace sellers all the time.

Lands’ End is wise to test the waters with Amazon by offering only a limited set of its products for the initial period. While Amazon offers a new channel and new customers, Lands’ End will not control the pricing, placement or promotion of its products. In parallel with this Amazon experiment, Lands’ End should boost investment in its own website and ensure it is the go-to destination for its most loyal shoppers. The incremental business from Amazon will be nice, but Lands’ End does not want Amazon to become its primary sales channel.

Frankly, I don’t always see Amazon as a competitor. Sometimes they are a channel and it seems to me that Lands’ End could use that right now.

The potential added profit for Lands’ End from an aggressive Amazon partnership is minimal. Amazon has incredible hype about their sales but that hype doesn’t translate into high levels for a brand that is already familiar with the volumes it can deliver through retail stores.

Further, if Lands’ End is hoping this adds some awareness for their products, they’ve misled themselves here. Certainly every brand needs to come to grips with a strategy for leveraging or engaging with Amazon (and taking products OFF Amazon is an entirely valid strategy). But today too many brands believe what Amazon puts out in their press releases without validating wehther the reality justifies the hype.

I went years without hearing news from the Lands’ End brand. In fact, they had faded into obscurity until their partnership with Amazon. How can I criticize a partnership that gives a brand new life?

With that said, I wouldn’t recommend a partnership with Amazon for a high-fashion line, but Lands End’ has never been hip. They are practical, affordable — and invisible.

The partnership with Amazon is a lifeline for the brand. It has us talking about Lands’ End once again. And suddenly, they exist.

I think Lands’ End is at a brand-building stage as part of its post-Sears era. On that basis they do need to get in front of customers who haven’t experienced their product in a while. Given that this becomes a positive experience it may be logical that they “in-source” all their sales thereafter and leave Amazon behind.

I 100% approve of Lands’ End selling an edit of its line on Amazon.com. It’s a much more compelling alternative than to not selling it on their own site. There are not that many soft goods brands in the “popular” price range that will be able to survive without a relationship like Amazon. Amazon is too good at delivering a customer experience that no soft goods retailers has yet been able to match.

One alternative would have been to follow J.Crew’s lead and partner with a department store or other mass merchant. Oh wait — they already did that, right?

Gap and Lands’ End are the first of many to realize the path to long-term survival needs to include Amazon.

For any company, the decision to be/not be on Amazon is a tradeoff between the greater exposure one will have vs. the fees paid, loss of control over how merchandise is displayed, and all the other compromises entailed in becoming, essentially, a tenant.

For a strong brand, many times the tradeoff doesn’t work — or at least the brands think it doesn’t; and I hardly know enough to tell LE whether or not they’ve made the right decision. But it’s an indicator of how they’ve declined that apparently they think they aren’t (strong enough) … another sad legacy of Sears’ reverse-Midas-touch.

It’s all about the brand or you become a commodity. Lands’ End had a well defined brand that was blurred by becoming a Sears house brand (aka: private label — wether it was or not, that’s the consumer perception). With becoming available via Amazon, the brand is further diluted.

Without a brand, the merchandise becomes a commodity; it loses value beyond retail cost.

Braintrust
"If they focus on product and brand, then leveraging key partner channels for reach and efficiencies may be a viable path."

"Lands’ End is wise to test the waters with Amazon by offering only a limited set of its products for the initial period."

"It’s all about the brand or you become a commodity. Lands’ End had a well defined brand that was blurred by becoming a Sears house brand..."