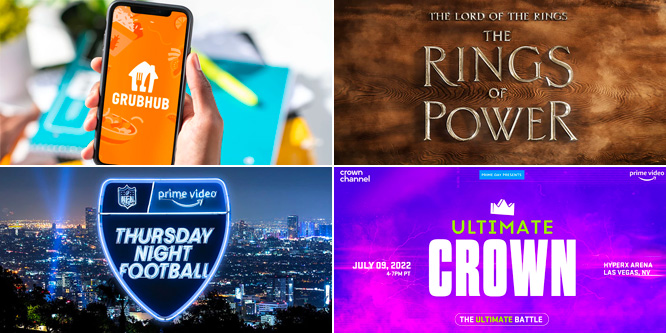 Amazon.com’s Prime membership already comes with plenty of perks, and now the company is adding more.

The retail and technology giant, in the run-up to its annual Prime Day event, said that Prime members in the U.S. are eligible to receive a free one-year subscription to Grubhub+, complete with free delivery fees on orders of $12 or more and added benefits including free food rewards and order discounts.

Prime members may activate the deal at amazon.com/grubhub. They will need to cancel their Grubhub membership before it ends in 12 months to avoid being charged the monthly fee, which currently stands at $9.99.

Current estimates of the numbers of Prime members in the U.S. range between 157.4 million and 159.8 million. Amazon is offering a free 30-day trial membership for individuals looking to test the program and grab deals on Prime Day, July 12 and 13.

Amazon is also offering perks around its Prime Video offering. Starting today, members can get a two-day sneak peek at its upcoming  show, The Lord of the Rings: The Rings of Power. Twenty million Prime members around the world added the show to their watch lists this week, according to Amazon.

The company also said members will get opportunities to save on NFL-licensed products, Fire TV smart televisions and streaming sticks ahead of the kickoff of Thursday Night Football on Sept. 15.

“Being the first to watch a sneak peek of one of the most highly anticipated shows of 2022 or ordering your favorite takeout while watching a football game on a TV you snagged for a great price — that’s the promise of Prime, and there’s never been a better time to take advantage of all the membership has to offer,” Jamil Ghani, vice president of Amazon Prime, said in a statement. “Prime already delivers great value for members. These new exclusive offers and experiences show how a single Prime membership unlocks a whole world of potential.”

DISCUSSION QUESTIONS: Will a free GrubHub+ membership, sneak peeks and other new perks be incentive enough to add big numbers to Prime’s membership ranks? Do you think most see Amazon’s Prime subscription as a better or worse value during the current inflationary period?

Please practice The RetailWire Golden Rule when submitting your comments.
Braintrust
"If a consumer is already contemplating Prime, membership perks like these could push them to join, but to add big numbers Amazon will have to think bigger."

"It will be interesting to see what this does for GrubHub."

"For Amazon to continue to increase pricing, they will have to provide the value. It’s that simple."

17 Comments on "Will new perks add to Amazon’s Prime numbers?"

This is as much about member retention as it is about acquisition. There’s no doubt that adding these new membership perks will help retain existing Prime members and attract new ones. Amazon is essentially a services/content aggregator and as a result, their membership moat continues to get bigger. The more meaningful services, the better the value proposition and it’s clear that Amazon isn’t about to take their foot off the gas.

Nailed it, Mark. According to Digital Commerce, they’re already in 82 percent of U.S. households. That’s unprecedented in my experience. With that kind of penetration, I don’t know that there is much room for growth. If I were in a strategic position at Amazon, my worries would be about retaining customers. The company has recently received a lot of bad press and, for now, it seems to be weathering it well. It would be good to remember that consumers are fickle, and the success the company enjoys now should not be taken for granted. That said, I’ve never seen Amazon take anything for granted. These new perks demonstrate my argument.

For those that use the perks, Amazon Prime is already exceptionally good value for the money. Adding more benefits may help retention and may boost new subscriber numbers modestly, however I don’t see these things moving the needle significantly. The problem is that there are many households that either simply can’t afford the service or don’t use it enough to justify the cost during these more constrained times. That will create some erosion. All that said, Amazon Prime will remain one of the most successful retail membership programs of all time.

If a consumer is already contemplating Prime, membership perks like these could push them to join, but to add big numbers Amazon will have to think bigger.

I think Prime membership is already a deal, but for those that are not part of the Amazon ecosystem you have to keep adding the “but there’s more” items as money is getting tighter each day. I think they will be successful in adding more subscribers.

At this point most of us are so far into Amazon that these perks won’t mean a lot. I don’t care about GrubHub or Lord of the Rings so those things would not move me. It’s the ease of Amazon that gets me and I know I am not alone.

Sorry, GrubHub+, a few sneak previews, NFL gear and a few more deals on Amazon tech do not feel like they will be enough to move the needle on Prime memberships. With Prime’s already huge penetration rates, I understand why they are targeting niche audiences. I just think they have picked the wrong niches. These niches are already full of very dedicated customers. Seriously, when was the last time you met a LOTR fan who would let a couple bucks stand between them and their franchise? Or a hungry Millennial without a GrubHub subscription? Or a zealous NFL fan that was waiting for a deal to buy their jersey? I appreciate the concept, but I think they need to look for niches that aren’t already so dedicated to the perks they are offering.

Looking beyond the marketing messaging, these perks are primarily exposure benefitting the companies wanting access to Amazon’s enormous audience. As an Amazon Prime subscriber, I might use some of these promos but they are incidental to the main reason I am a member: a better shopping experience with Amazon.

These perks are icing on the cake. Prime is already a great deal. For Prime members this is just a reminder that Amazon will continue to improve its offering.

When I get that Prime email announcing members can get a two-day sneak peek at its upcoming show, The Lord of the Rings: The Rings of Power, my first reaction is, wow!

The strategy of Prime is to, insidiously or otherwise, make it a part of people lives.

Inflation has caused many people to look at all their expenses including all their subscriptions and determine which they should hold and which they should drop. Amazon’s Prime members are no different. As Mark has noted these new perks are aimed at both retention and acquisition.

The cost of Prime has risen fairly steadily, so it makes sense they would look to add affordable perks to the package. It will be interesting to see what this does for GrubHub.

Inflation is making consumers question purchases, and whether they are “nice to have” or “need to have.” Many Amazon Prime customers may already have another membership with Sam’s Club, Costco, etc. The more that Amazon can prove the value of the membership and benefits of Prime, the better, especially with continued price increases.

I question whether a time-limited subscription (complete with the need to remember to cancel on the part of the customer) will really move the needle one way or another, especially when GrubHub is exactly the type of expenditure consumers are most likely to cut in an inflationary environment (food away from home where you have to pay a tip). This perk seems to benefit GrubHub far more than Prime.

Acquisition is the new Retention.

I think this will reduce churn — yes. Every now and then I do a pass through all the subscription services I pay for and don’t really use, mostly TV channels. Inevitably I cut a few. Several of these are bundled via my T-Mobile subscription, which casts T-Mobile in a good light. Bundling at no extra charge for some of those services seems a winning strategy. At least for the first year.

I remember Jeff Bezos being interviewed about the higher price of Prime. The short version is that he wanted to offer enough perks that the Prime membership was an easy-to-make decision. For Amazon to continue to increase pricing, they will have to provide the value. It’s that simple.

Go, go, go! The new perks will only add to the increasing Prime membership, continue growth, and incentivize more, new purchases. Amazon has done this successfully for many years now and the real question is why would they stop adding incentives to the Prime Day in July?

Braintrust
"If a consumer is already contemplating Prime, membership perks like these could push them to join, but to add big numbers Amazon will have to think bigger."

"It will be interesting to see what this does for GrubHub."

"For Amazon to continue to increase pricing, they will have to provide the value. It’s that simple."