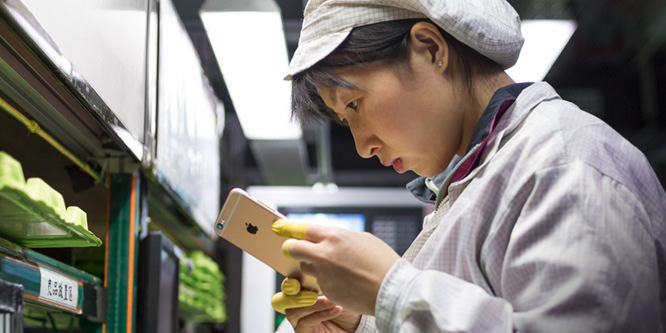 Retailers have been changing the way they do business to appeal to, or avoid alienating, an increasingly socially conscious consumer base. But when it comes to apparel manufacturing, there remains a perception that a large chunk of production happens in overseas factories with unsavory, and perhaps inhumane, labor practices. But some big names in the apparel industry have been working to change that with a new kind of supply chain transparency.

Gap is the latest to join a growing list of apparel brands and retailers disclosing a list of factories where its products are produced, according to Human Rights Watch. Other big name brands such as Levis and New Balance as well as retailers including Target are also on the list. This transparency potentially allows for quicker identification and correction of human rights abuses.

A study last year by the same organization pointed to Gap, Adidas and Marks & Spencer as companies that sourced from factories in Cambodia in which human rights abuses were rampant, according to Salon. All of these companies now offer transparency into which factories they use.

The trend extends to other industries beyond apparel. Apple, for instance, publishes an extensive yearly supplier responsibility report on its website which details progress in areas such as protecting human rights and environmental practices. However, as recently as last year, the company came under criticism for human rights violations by suppliers in China discovered in an undercover investigation, according to International Business Times.

In apparel, the advent of fast-fashion has been of particular concern. The demand for cheap, quickly made clothing has led to allegations that suppliers are compromising worker safety and wellbeing.

Technological innovation may offer another avenue to meet the demands of the buying public without relying on people doing work in dangerous conditions. Adidas, for instance, recently introduced a SpeedFactory which quickly creates localized and customized shoes with minimal human involvement.

DISCUSSION QUESTIONS: Should retailers make it a point to publish information about the factories that manufacture clothing and other products? Will the demand to make this information public drive lasting changes in product sourcing?

Please practice The RetailWire Golden Rule when submitting your comments.
Braintrust
"The challenge will be keeping it truly transparent."

"Those that jump on the bandwagon without knowing what’s really happening behind closed factory doors are sure to get burned one day."

"Why not get ahead of the game now and capitalize on the transparency and ethical standards you practice?"

11 Comments on "Will retailers benefit from greater supply chain transparency?"

If a retailer has a commendable supply chain they can only benefit from sharing. However those that jump on the bandwagon without knowing what’s really happening behind closed factory doors are sure to get burned one day.

Still, the majority of U.S. consumers are more focused on price, convenience and availability than maintaining ideals.

The kind of supply chain transparency that the consumers want, and that retailers should be obliged to provide, has to do with publicizing (or guaranteeing) that human rights are protected in the manufacture of a product and cruelty to animals is avoided in the manufacture as well. As long as retailers tell the truth about these factors, they do not need to share anything else. But a misstep here can be costly, so truthfulness is paramount.

I agree, Bob. The purpose of buying ethical brands is just this: to inspire businesses to conduct themselves in a world-friendly fashion. I repeat the words “you vote with your dollar” more than I’d care to admit. Companies are making these changes to appeal to Millennial (and Millennial-minded) buyers, which is exactly why Millennials are making the effort to shop ethically. The market is changing in a deeply inspiring way!

I don’t think this is a good strategy. Consider a few truths.

Today’s hero supplier is tomorrow’s goat. Any retailer who takes this step might gain a brief advantage today, but they open themselves to far higher high future risk.

A list of this sort is only important to a committed minority of consumers. It could have far more importance to shareholders and be a stock price strategy. But a consumer strategy? Only in niche retail.

As noted with Apple’s experience, consumers have little ability to really take away truth from this list. Interpreting the list becomes an action for activists. Yet activists are a high-risk group to rely on.

The humanitarian qualities of a factory are culturally dependent. And do-good Westerners have a track record of being entirely wrong when trying to impose their cultural norms onto workers in other countries.

As my grandmother used to say, “It can’t hurt.” Socially conscience consumers want to know that the products they buy are not being made in inhumane sweatshops. Retailers can make a statement by supplying this information — not only for brands that are transparent, but for private or house-label goods. Hopefully this will encourage manufacturers to treat their workers more humanely.

Generation Z shoppers will demand and expect transparency. Retailers and brands alike had better make certain that their houses are in order. This will expose any lapses or vulnerabilities with respect to social, economic and environmental responsibilities. With transparency comes responsibilities. If you have nothing to hide why not encourage transparency? Shoppers present and future will award your transparency with their purchases.

The challenge will be keeping it truly transparent. If this transparency takes hold and becomes a KPI will others follow (at least in what they say) publish and advertise? Or will this become another “greenwashing” moment, where the objective is to say as much a possible and do as little?

Initiatives like Target Gather (Target, IDEO CoLab, MIT Media Lab) and Amazon Elements are seeking to drive greater transparency with sourcing stories and straightforward packaging. I believe that more and more retailers will pull back the curtain, given the backlash towards GMOs, human-rights concerns and a general demand for greater sustainability.

Consumers are increasingly curious to know more about the ethical business practices of suppliers before they make buying decisions, therefore it may well become expected for retailers to disclose this information. Why not get ahead of the game now and capitalize on the transparency and ethical standards you practice?

Brand building is about amplifying the positive, and this should be focus of information and disclosures. Opening the door to reveal activities and processes that diminish quality of life anywhere in any way (and every production process does) is to position the brand in a defensive stance. Accentuate the positive in successes and steps toward improvement. This is PR 101.

Ethical sourcing is an important value component for an increasing number of consumers. For some it exceeds even price in importance. That means retailers, brands and even contract manufacturers have much to gain by assuring the end consumer that they adhere to best practices. But this is tricky business when a manufactured item includes ingredients, materials or components that may be farmed, mined or sub-manufactured by third, fourth or fifth parties. Some of the copper used in that electronic device may come from a mine in a third-world country that is a notorious polluter with a bad safety record, for example. How many questions must a merchant ask before it can make a claim to its shoppers? There’s a chance that consistently publishing the best available ethical sourcing information online will lead to a virtuous chain of events. Retailers, manufacturers, sub-manufacturers, and raw materials suppliers could be increasingly motivated to shun any source that is a bad actor with respect to labor practices, animal cruelty, pollution or safety violations. In the meanwhile, retailers and brands… Read more »
0
|
0
-   Share

Braintrust
"The challenge will be keeping it truly transparent."

"Those that jump on the bandwagon without knowing what’s really happening behind closed factory doors are sure to get burned one day."

"Why not get ahead of the game now and capitalize on the transparency and ethical standards you practice?"