Will Rite Aid be of much benefit to Albertsons? 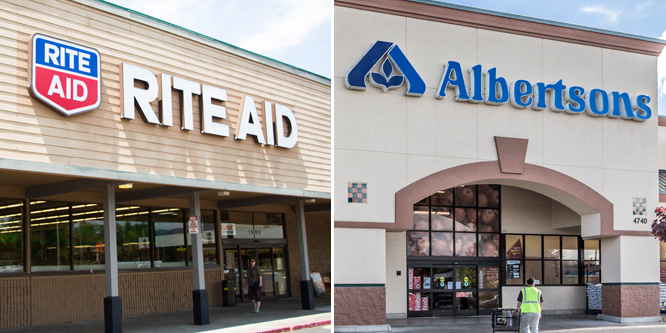 After its Rite Aid mega-merger is completed later this year, Albertsons will have a whopping 4,900-plus locations nationwide, serving more than 40 million customers per week.

The merger will provide a much more significant presence in the increasingly important health and wellness space, possibly creating a one-stop shop for all things health-related, according to industry observers. Rite Aid’s locations also offer opportunities to expand Albertsons’ strong lineup of private labels, most of which originated with its Safeway acquisition, such as O Organics.

The nation’s second-largest supermarket chain earns praise for several unique initiatives in the past few months, including its new marketing service, Albertsons Performance Media, that leverages POS data, and extending its digital marketplace to enable niche brands through vendor drop-shipments.

Yet a core problem is that Albertsons banners are all positioned the same way: mainstream, run-of-the-mill supermarkets for middle-income consumers.

Don Stuart, managing partner at Cadent Consulting, said, “It’s banners typically lack the local appeal of a Wegmans, HEB or Big Y,” a real problem in an increasingly competitive marketplace where differentiation is key — especially in the absence of Aldi-type prices, Publix-style customer service or the unique assortment of a Trader Joe’s.

Another concern is that Albertsons’ private-equity ownership may be under-investing in stores.

Stated Neil Saunders, managing director of retail at GlobalData, “The Rite Aid deal itself signals that management is more focused on making acquisitions than it is in investing in and revamping its core business. In my view, that’s a mistake.”

He adds, “The grocery world is about to get a whole lot tougher, and just being good enough will no longer be enough. In my view, Albertsons has a lot of work to do if it is to succeed.”

Some are hopeful that Jim Donald, the former president and CEO of Starbucks and Haggen who was hired as president and COO in March, can elevate Albertsons.

“Donald has a track record for turning around ailing businesses and experience in industries where the consumer is truly a priority,” states Phil Chang of retailPhil. “Hopefully, he can bring that focus to Albertsons, which seems to be lost in the science of retailing rather than trying to create the magic that truly makes shoppers happy.”

DISCUSSION QUESTIONS: Will Albertsons’ position be helped more by the addition of Rite Aid, private label expansion, further differentiation among banners or other taken by management? How would you assess Albertsons’ strengths and weaknesses?

Please practice The RetailWire Golden Rule when submitting your comments.
Braintrust
"Bottom line, there may be gold in them there hills but Albertsons is going to have to work hard to mine it."

"The biggest problem with Alberstons is its estate. There is a big variation in the stores it operates..."

"Mergers and acquisitions are typically designed to purchase revenue and Albertsons is no exception."

7 Comments on "Will Rite Aid be of much benefit to Albertsons?"

On the one hand, this is a sensible move that gives Albertsons more scale in pharmacy and health, which is a growth area of the business. It also gives the company access to some geographic areas it does not currently serve with a pharmacy offer.

However, how will Albertsons use Rite Aid to drive growth? A rebranding of Osco and Sav-on concessions in existing stores has been rumored, but that is a cosmetic rather than a material change. To me, the deal sounds like yet another acquisition that will merely add new revenue and another entity into an already overly-complex corporate structure.

The biggest problem with Alberstons is its estate. There is a big variation in the stores it operates but, generally, they are tired and under-invested in. This makes the shopping experience sub-par. Remedying this should be the number one priority for the business.

Acquisitions have long been the “sizzle” for retail businesses while the investment in the existing operations has been the boring “OK, they are doing that.” So? The time this is not true is when the retailer invests in something that is dramatic.

The acquisition of Rite Aid can benefit Albertsons but like with all acquisitions, the questions is “we bought it, now what?” As chain pharmacies have begun to stock more and more food, they are a logical place for Albertsons’ private label product. This will work as long as customers see PL items as comparable to the items they may replace but offering a greater value.

The flip-side of the coin is, is Albertsons going to rebrand its extensive number of pharmacies to Rite Aid? I don’t foresee any upside to doing so. There may be benefits to combing some of the back of the house functions.

Bottom line, there may be gold in them there hills but Albertsons is going to have to work hard to mine it.

Aside from it being an outlet for their private label business, I’m not sure acquiring Rite Aid stores is the right use of Albertsons’ resources. But I’m not against a retailer being a middle-of-the-road chain. My guess is that if they tried to re-brand themselves, they’d lose more than they gain. That said, the stores have to be appealing and the assortments on target.

Mergers and acquisitions are typically designed to purchase revenue and Albertsons is no exception. The challenge is that today’s shoppers expect an experience — whether in-store or online. The challenge for Albertsons (looking through a financial lens) will be to invest in those over 4,900 physical locations to make them desired destinations vis-a-vis their competitors. The shopping experience of those 40 million shoppers every week (along with their wallets) are in the balance.

Private label and pharmacy expansion has the ability to drive traffic to the stores. With almost 66 percent of the drugstore sales for Rite Aid coming from prescription drugs, this will drive repeat traffic to the Albertsons stores. Unique is the fact that of the remaining 34 percent of sales, 18.7 percent comes from Rite Aid private brands. This is a great opportunity for Albertsons to create a loyal customer along with the inclusion of the customer base from the wellness/rewards program (currently 13 million customers).

Management should focus on private label, rewards program integration and economies of scale in the back of house for both brands. This is in addition to the much needed overhaul and refresh of existing stores and creating product assortments made up of readily available, low-price staple items and good quality produce offerings. The position of Albertsons is that they are sitting on a gold mine — echoing Steve Montgomery’s point.

The least of the Big Three druggists added to perpetually underwhelming Albertsons, so small + small = small. My expectations are low — so low they’ll probably be exceeded — but unfortunately nothing I read in this story compels me to change them.

It is the absence of “private label,” a “long tail” and differentiation that should frighten Albertsons’ investors. An executive from Starbucks, more than most, will understand creating and executing a replicable process.

This is a big win for Albertsons.

Braintrust
"Bottom line, there may be gold in them there hills but Albertsons is going to have to work hard to mine it."

"The biggest problem with Alberstons is its estate. There is a big variation in the stores it operates..."

"Mergers and acquisitions are typically designed to purchase revenue and Albertsons is no exception."