Will Starbucks really be able to trash its paper cups? 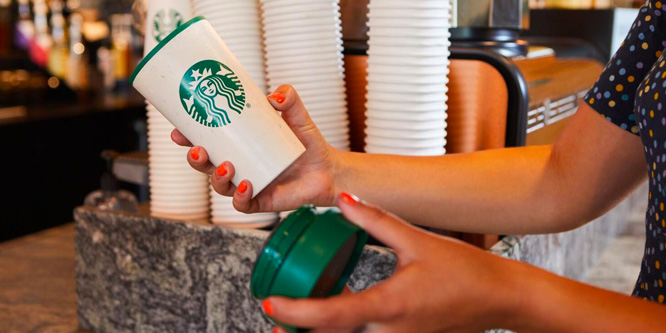 If Starbucks makes good on its most recent environmentally-minded endeavor, by 2025 you may not see nearly as many of the chain’s paper cups in the hands of coffee drinkers.

Michael Kobori, chief sustainability officer at Starbucks, called eliminating the disposable cup the “Holy Grail” of an environmental solution, according to CNN.

The chain wants to allow all customers by 2025 to be using either their own coffee mugs or reusable cups available in-store, as an alternative to the now ubiquitous branded paper cup. While not promising to get rid of single-use paper cups entirely, the chain does plan to take steps to make the option less attractive. It is testing 20 versions of “borrow-a-cup” programs in eight different markets in an attempt to find the best model for promoting reusability.

One option is the use of a durable, environmentally-friendly cup people can take with them for a $1 deposit and return to get their dollar back. Another involves incentivizing customers to bring their own mugs (a practice stopped early during the pandemic due to fears of surface contamination).

Single-use containers became a point of focus for environmentally conscious consumers in recent years. The movement against single use plastics grew to the point where many municipalities throughout the U.S. banned plastic grocery bags, though many such regulations were relaxed at the beginning of the pandemic.

News of Starbucks’ new, eco-minded move comes as the company gets hit with heavy criticism from some, who have questioned how dedicated the chain truly is to the socially responsible ethos it has a reputation for touting.

The company has especially fallen afoul of labor advocates, who have criticized Starbucks’ moves to discourage and prevent unionization as a wave of labor activism has begun to sweep the U.S., as reported in Fast Company. The article, which characterizes the chain as a “progressive company [that has] lost its way,” recounts employee allegations of Starbucks engaging in union-busting moves, like captive audience meetings and punitive store closings, hour reductions and firings. The National Labor Relations Board recently sent the chain its first formal complaint over alleged illegal retaliation against two baristas.

DISCUSSION QUESTIONS: To what extent do you think Starbucks will be able to reduce reliance on the disposable paper cup? What do you see as the potential upside and downside of the move? Will good will over environmentalism impact the public perception of Starbucks as having “lost its way” on socially responsible issues?

Please practice The RetailWire Golden Rule when submitting your comments.
Braintrust
"I think this is a noble attempt, but I don’t think it will ever happen. Then again, we did once return milk and pop bottles, so who knows?"

16 Comments on "Will Starbucks really be able to trash its paper cups?"

The question is, will customers give up on paper cups? Anything to help reduce environmental impact is worth trying, and Starbucks’ experimentation approach to finding the best solutions is laudable. Ultimately, customers will decide the fate of the paper cup and, while previous attempts to reduce paper cups have not been successful, I’m hopeful that customers will be more open minded and do their part to help minimize the impact.

This is a step in the right direction and I think that Starbucks can minimize the use of disposable cups. However eliminating them entirely is, in my opinion, not on the agenda. The reason is customer convenience. If you’re on the go and have an impulse to buy Starbucks you won’t necessarily have your own cup with you and you also may not want to carry around one of the returnable cups after you’ve finished your drink. So paper cups still have a role, but hopefully a more minimal one. It would also be interesting to know the impact of the change: after all, reusable cups still have an environmental footprint as does their sanitization and eventual disposal. So what is the net benefit?

I just checked Reddit for info on using customer provided cups and sanitation. What Starbucks baristas do for the world is severely under rated.

With nearly all quick serve coffee + food restaurants pivoting their models to 80 percent drive-thru and 20 percent in-store counter ordering, I see incongruity with this strategy. Think about it — are consumers willing to wait in the drive-thru line longer because personal mugs/cups are being handed to the attendant while they drive up to the window? If anything, in today’s gig economy, the average patience of a consumer is a nanosecond. Everyone wants to get through that line faster than an NFL running back eyeing the end zone. My advice would be to look at more sustainable packaging rather than doing away with cups altogether. The biggest beverage companies have made tremendous strides in developing plant-based plastics for caps and walls of the plastic bottles. The same can be done with paper, and Starbucks would be well served to invest in these innovative ideas and build PR campaigns around them to spotlight their continued progress towards sustainable goals.

Overall, it’s meaningful for an organization as large and ubiquitous as Starbucks to take on a rather aggressive plan to support sustainability. With a loyalty program as strong as Starbucks’, they have the potential power to incentivize consumers to engage.

However the challenge here is what we see with a lot of sustainability efforts – the program relies on consumers to participate for it to be successful. Bringing reusable cups requires a behavior change on behalf of the consumer – not just remembering the cup but knowing a lot of people need coffee when they are on-the-go. They may not be able to have a cup with them, or anywhere to store and wash it after the fact. These expected behavioral changes have been a key hurdle for past efforts that require consumers going out of their way to participate.

Although announced before Schultz’s return, this initiative falls neatly into his agenda which makes it more likely to be executed well. Starbucks has an ESG obligation, no time like the present.

When the first Starbucks opened in our neighborhood in 1998 or so, I became a Starbucks fan. I had just started a new company and was still working from home. I found it was hard to get started in the morning while staying in my apartment, so I would head out to the Starbucks early with my newspaper and my own large cup. After the coffee, paper and something to eat, I would return home and start the day just like in any office. I was not the only one who brought their mugs (you saved 10 cents if you used your own.) It was really quite common. However so much has changed since then. More than the place to hang out, Starbucks became the place to grab and go. They have even been testing grab-and-go only stores. They have added an app that, observably, is extremely popular. In the morning that app produces an unending stream of traffic of customers picking up their order. All that said is the preface to my conclusion that… Read more »
0
|
0
-   Share

Give Starbucks another star for the effort. If Starbucks adopts a method similar to Lidl where you bring your own bag or they charge you, this may just work.

This Starbucks policy adds a lot of labor for customers with reusable cups and increased costs for cleaning materials, also adding a new task of cleaning cups, storing larger cups, ensuring cups are clean before the beverage is prepared, handling broken cups, adds various complications to the operation.

Great idea but it will never happen. What makes us think a barista wants to touch my cup I bring in – or your cup, for that matter?

I think this is a noble attempt, but I don’t think it will ever happen. Then again, we did once return milk and pop bottles, so who knows?

Refill cup/mug programs have been around for many years. Some have been successful and others have not. It is another case of it being not what you want to do, but what your customers want and/or are willing to do.

If you want customers to bring their own cup or a refillable you will need to offer an incentive. Typically, this is a lower cost for the refill than for a new cup. The same is true if you want to charge a deposit and have the customer bring back a dirty cup. Some of the most successful refillable programs I have seen require a place for the customer to rinse out the cup before refilling. All these programs require a loyal customer base which Starbucks has. The occasional customer will not be a participant and will certainly be unwilling to pay a $1 deposit.

Sometimes companies actually need to be efficient and make money. What is the sense of being sustainably responsible if you lose sales and lay off employees? I am not saying that will necessarily happen, but we need to expect companies to take their sales/profits into consideration when making sweeping changes. I think it is premature to dispose of the paper cups altogether — it will eliminate impulse and drive-by coffee seekers. It might be more wise to have paper cup disposal containers and create their own recycling program to market. Encourage customers to keep their old paper cups and dispose of them in the stores when getting a new cup. I do like the idea of a “coffee crew” program like Harvard did with their pub and other legacy spots do with having customers leave their mugs at the store to use while there. Starbucks has not lost its way in being socially responsible, it is just that the WOKE audience out-WOKE them. Let Starbucks focus on labor laws/unions and inflation for now.

I feel a twinge every time I get a bev in a paper cup. I usually don’t have time to sit, have forgotten to bring my own or it’s not an option (COVID). While they may not be 100% successful, Bravo to Starbucks for taking on this problem!

Starbucks is already not always the most efficient. Adding this program will only make it worse. How would it even work in a drive through?

Also will the employees really want to be constantly washing and sanitizing customer cups? How will contamination from such cups work? Knowing how understaffed these businesses often are I would be worried they do not have the staff or time to properly sanitize.

Many health departments have regulations that do not allow outside cups, plates, etc. to be brought behind the counter in a restaurant or fast food place. How will that work? I always wondered how gas stations were allowed to offer drink refills and supposedly it was because the entire set up there was self serve dispensers.

For customers sitting inside Starbucks, absolutely, don’t provide the paper cups, unless the customer wants one (maybe they won’t finish the whole beverage there).

Sadly, they are calling this their holy grail for a reason. It will be really hard for them to make this change from a consumer/financial perspective. I do really hope they do it and now that Howard Shultz has just been announced as interim CEO (again!), I think they actually might make it happen. Shultz always cared as much about social issues as profit in my opinion.

Braintrust
"I think this is a noble attempt, but I don’t think it will ever happen. Then again, we did once return milk and pop bottles, so who knows?"