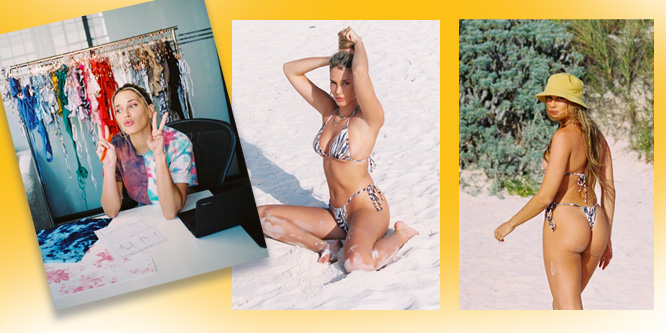 Victoria’s Secret said last week that it has acquired a minority interest in Frankies Bikinis, a women-founded and led beachwear and lifestyle brand.

The move brings to mind how much Victoria’s Secret has changed in recent years — the chain seems to have spent much of its time trying to put its past in the rearview. In the case of Frankies, it recalls memories of the retailer’s decision in 2016 to get out of swimwear, a decision that was panned at the time and later reversed.

Frankies is known for its  “laid-back Malibu vibe,” according to a press release to announce Victoria’s Secret $18 million investment. The company was founded in 2012 by then 17-year-old Francesa Aiello and her mother Mimi.

The younger Ms. Aiello, who is creative director for her brand, said, “I have such respect for the transformation that Victoria’s Secret has made over the past few years, specifically with diversity and inclusivity, and I believe that together we can continue to bring a new wave of fashion into the swimwear industry for all women of all shapes, all sizes and all backgrounds. With Victoria’s Secret beside us, Frankies Bikinis will continue to deliver our signature collections that encourage customers to explore their personal style and create looks unique to themselves that make them feel their most confident.”

Victoria’s Secret CEO Martin Waters called Frankies “an aspirational beachwear brand and trend leader in the swimwear category, with room to grow and extend into new categories and attract new customers in the direct-to-consumer channel.”

Mr. Waters said the investment in Frankies “is a continuation of our efforts to expand partnerships with culturally relevant brands founded by women entrepreneurs.”

Victoria’s Secret made news recently with the launch of a new online-only private brand called Happy Nation. The brand, which will be available beginning next month, features bras, panties and comfortable clothing for pre-teen girls.

The retailer recently released its full year results for 2021, its first year as a publicly-traded company after its spinoff by Limited Brands. Victoria’s Secret posted operating income of $869.5 million compared to $97.5 million in 2020. Net sales for the year were up 25 percent with comps up three percent.

DISCUSSION QUESTIONS: What do you expect Victoria’s Secret to get from its investment in Frankies Bikinis? Will “partnerships with culturally relevant brands founded by women entrepreneurs” prove a successful strategy for Victoria’s Secret?

Please practice The RetailWire Golden Rule when submitting your comments.
Braintrust
"The timing seems perfect in the wake of Victoria's Secret's brand revamp."

"It’s great that they’re finally recognizing that they alienated a lot of customers with the original move and are looking to put it back into the lineup, but I feel like the w"

"It’s a different marketplace now, so the trick will be delivering on the inclusivity promise, which has not been their strong suit."

The latest ad campaign from Victoria’s Secret shows such a variety of body types, ages, and backgrounds. If they carry this formula through to the swimwear category it should be a winning strategy and a natural extension of their brand. Reinvesting in female entrepreneurs takes this one step further and is a solid move.

Oh, Vicky’s. A company that has SO lost its way and still has not figured out how to find it. Let’s not forget that VS used to sell swimwear and, by most accounts, it was a pretty successful business for them until it was killed by leadership for no apparent reason.

It’s great that they’re finally recognizing that they alienated a lot of customers with the original move and are looking to put it back into the lineup, but I feel like the world has moved on. Does VS know what women want? Has this become so much of an unanswered question for them that they must invest in women-owned companies to get access to that kind of expertise?

I sincerely hope VS can regain some cachet in the market, but I don’t know that the company can recover from not understanding major market shifts that companies like Aerie (Aeropostale) and Third Love have already capitalized on. And “investing in a swimwear company” is not going to be enough to do that by any stretch.

The original decision by Victoria’s Secret to exit the swimwear category has turned out to be a mistake. As long as women continue to want bikini swimwear and do not regard it as sexist, but cool, Victoria’s Secret should be able to turn this new acquisition into a vehicle for substantial additional revenue and profits.

Victoria’s Secret was a swimwear powerhouse in the ’90s, but they walked away from that business when it was deemed “off strategy.” It’s a different marketplace now, so the trick will be delivering on the inclusivity promise, which has not been their strong suit.

Having worked in women’s wear for years, I can testify — swimwear is a VERY difficult and rarely profitable business. Anything — a cold March (ahem), a lack of exposure, wrong styles/colors, etc. can send you into markdown city. The selling season for most areas of the country, just to make things harder, is two to three months tops.

Which is exactly why this is a good move on VS’s part. A company that does nothing but swimwear brings a lot of knowledge (including FB’s great designs) to the table that will help with that. Les gave up on swimwear because of its difficult nature, but a partnership with someone that’s an expert on the topic should ease that road back to success.

With the return of travel, this should be a big year for the swimwear market. As such, it is commercially sensible that Victoria’s Secret is taking a bigger stake in the segment – especially after surrendering a lot of the market share they held in swimwear in years gone by. Frankies seems like a great brand and I am sure that the involvement of Victoria’s Secret will help it grow. The wider picture here is a pivot to a more inclusive Victoria’s Secret which supports women, including women founders and entrepreneurs. This is long overdue but it is great to see the change being implemented with conviction!

Smart move for Victoria’s Secret to pursue a swimwear acquisition rather than attempting to rebuild the category internally. Frankies enjoys a healthy social media following and fan base. The timing seems perfect in the wake of Victoria’s Secret’s brand revamp.

Smart move by VS for several reasons: First, a distinctive, lifestyle beachwear brand aligns extremely well with VS’s values. Second, laid-back, unique beachwear for multiple sizes – not just the ueber-thin models – should appeal to many. Third, acquiring women-led brands that can help grow and reinforce VS’s DTC strategies is strategically on point with the rise of digital consumption.

Smart move by VS & Co. Maximizing reasons why to shop and lifting overall profit on a per square foot basis. It is good to see a retailer responding to demand and making a commitment to change.

This is a great move to capture younger shoppers, but not enough to regain those that have longer memories of VS’s major missteps of the past.

$18 Million dollar, minority investment? That’s peanuts. I don’t even know if Victoria Secret thinks that will work. Add to that the fact that companies like Venus are everywhere. Unlike the days where people went out and bought a new, summer bathing suit. Now they bring 5 with them on a one week vacation.

Getting back into the bathing suit industry will likely require more of an investment than $18k. I hope they also plan to actually INVEST in Frankie’s brand to help increase sales. It’s one thing to buy shares. It’s another to buy into the company and make the necessary investments in brand awareness, etc.

Braintrust
"The timing seems perfect in the wake of Victoria's Secret's brand revamp."

"It’s great that they’re finally recognizing that they alienated a lot of customers with the original move and are looking to put it back into the lineup, but I feel like the w"

"It’s a different marketplace now, so the trick will be delivering on the inclusivity promise, which has not been their strong suit."