Will the election sidetrack holiday shoppers? 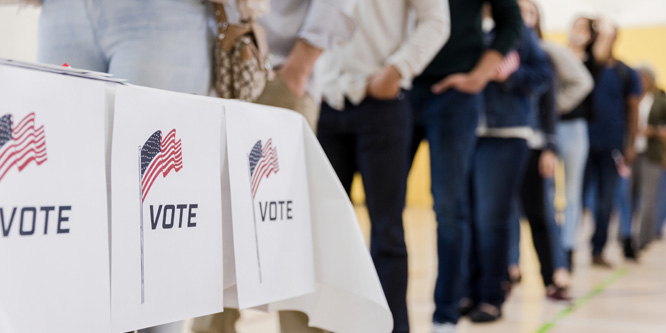 The presidential election typically causes distractions to holiday selling every four years and this year’s disruption might eclipse all others.

Eighty-three percent of registered voters say it “really matters who wins” the presidential election, higher than the share who said this at similar points in any prior presidential elections dating back to 2000, according to a survey from late July to early August from Pew Center Research. In 2016, 74 percent said the outcome of the election really mattered, while smaller majorities were seen in 2012 (63 percent), 2008 (63 percent) and 2004 (67 percent).

According to a survey conducted by LifeStance Health, 58 percent of Americans are worried about the upcoming elections. The election is negatively affecting sleep habits for 38 percent and leading to feelings of rage for 25 percent. The survey also highlighted concerns about the coronavirus, civil unrest and the economy.

No prominent surveys have arrived this year directly addressing the election’s potential impact on holiday sales.

A National Retail Federation (NRF) survey taken in mid-October of 2016 found more than a quarter saying the election would impact their holiday spending plans, with 43 percent expecting to be more cautious due to the election uncertainty.

Spending was largely expected to revive once the election outcome was decided. While Adobe analysis showed spending fell sharply in the days following the 2016 election, particularly in Democrat-leaning states, holiday sales overall grew four percent in 2016, above NRF’s forecast, with the help of a recovering economy.

A few retailers on second-quarter conference calls have cited uncertainty over the election as a possible fourth-quarter headwind.

Chris McCann, CEO of 1-800-Flowers.com, said on his call, “The general election, especially the national election, always is a little bit of a drag on retail sales in general. Now as we look at this year, while it’s a potential headwind because it’s so much in our face every day, it might not be that much different than a regular year. We just don’t know that yet.”

DISCUSSION QUESTIONS: How do you think the upcoming elections will impact the flow of holiday spending? Are other concerns facing the U.S. a bigger headwind for retailers?

Please practice The RetailWire Golden Rule when submitting your comments.
Braintrust
"Nothing short of a civil war or overwhelming natural disaster will stop, or even hinder in a major way, sales during the coming holiday season. "

16 Comments on "Will the election sidetrack holiday shoppers?"

The upcoming election will be a significant distraction and potentially impact holiday spending – but not as much as COVID-19 will. There’s no question that the election will dominate the zeitgeist through the end of the year, and perhaps beyond. The political uncertainty will likely cause consumer uncertainty and this will be reflected in holiday sales results — compounding the COVID-19 impacts. It’s not all doom and gloom, but this is going to be a holiday season like no other.

The process of a presidential election does cause a little disruption to retail, mainly because consumers get distracted and, at the margins, concerns and worry increases. However the link with retail spending is weak. People are far more influenced by factors such as their personal finances, confidence in the economy, job security and other issues which impact how much people have to spend. People’s perceptions of these things can shift depending on whether their candidate wins or loses, but that effect does not last for long. Once the election is over, people start to focus on the upcoming holidays. This year will be no different, although the election comes on top of a year full of churn so this will be one more disruption to add into the mix!

It is interesting to consider how the outcome of the election would impact voters’ spending habits. While the uncertainty of the election and what comes after the election is a big concern for a lot of people, shopping is a way that consumers feel in control or feel better about themselves or show their love for their family. I think there are bigger concerns for the retail industry, like a fall/winter spike in COVID-19 that could lead to more government restrictions on retailers.

I expect this to be a banner holiday season. We are on the cusp of a new hedonism. Wall Street is already banking on a Biden win. Optimism will return just in time but I don’t expect news reports or many analysts to cover or help with that. Green shoots are out there already in retail.

A resurgence of COVID-19 is more likely to be an issue for retailers than the election. Retailers must plan for an extended holiday season and be smart to direct traffic to their websites early and often in order to not swamp the brick-and-mortar stores with people.

Nothing short of a civil war or overwhelming natural disaster will stop, or even hinder in a major way, sales during the coming holiday season. While both political extremes are trying to convince us that’s exactly what will happen if the other side wins, that rhetoric is nonsense. U.S. consumers will always be the winners, regardless of the diatribes.

There’s more uncertainly in retail for holiday 2020 than at anytime I can remember in my 40 year career. I think the reaction to the results of the election across the country will have a big impact on consumer confidence and spending. The pandemic isn’t going away and will obviously be a huge concern for retailers and consumers. I don’t expect to see the Black Friday events in stores or to see holiday crowds as in previous years. I do expect continued expansion of e-commerce and touch-free transactions. I also am very interested to see what creative marketing plans retailers are going to show us to entice business while keeping customers and team members safe.

As with previous elections, there will be a short term impact on sales but the impact will go away during the holiday season. Consumers may pause while the election is decided which may take longer than usual. But once decided, consumers will adjust their thinking about their income and spending will proceed. However the other big concern that may have a larger impact is COVID-19. If people are out of work due to COVID-19 restrictions, they will spend less. The quicker a vaccine reaches the public, the quicker they will feel that the economy will recover (including their jobs) and the sooner they will spend money shopping.

History has shown over the last 100+ years that consumer spending will be impacted by a presidential election and especially if there is a change in party. The main reason is uncertainty based upon the fiscal policies established by the new administration. With that said does a national election send the retail industry into a tail spin? The answer is no, but it does not mean that retailers should ignore the impact of any presidential election. What we don’t know is the impact of a pandemic combined with a presidential election. We are definitely in unprecedented times. Which is more significant, the pandemic vs. the presidential election, in terms of its impact on the retail industry? Our (emphasis on “our”) current pandemic wins by a long shot. Lets get this pandemic under control so ALL of us feel secure and safe to shop and buy in stores again.

The longer the election remains undecided, the worse the impact on holiday sales. There is every chance that we may not know the results for several days and, if it is then contested in any way, the uncertainty combined with the pandemic will — without a doubt in my mind — have a negative impact on holiday spending. The sooner retailers can get their holiday assortments and promotions online, the better…

I think disposable income amongst the broad consumer base is the real issue here. To the extent (if any) that an election outcome inspires/detracts from consumer confidence, there may be impact. I maintain the bigger holiday season issue is whether enough consumers will be able to spend beyond food and basics.

The election won’t impact the holiday shopping season unless for some reason there is a big negative impact on the stock market and consumers get worried about a recession or depression. However, I do believe unless we make progress in addressing COVID -19 and more people get the opportunity to return to work, holiday shopping will be lower than last year.

The economy and COVID will have a much bigger impact on retail then the election. Of course the outcome of the election will give people confidence or not if the future will be positive in their minds. But that’s the future.

They will look in their wallets. They will put their masks on. And then decide how much they want to jump into the past habits of shopping.

In typical election years, it is said people vote with their wallets. This is anything but a typical election year. COVID-19 has been the ultimate disruptor for retailers, and consumer habits have endured dramatic changes. That disruption will have far more impact on shopping habits for the holiday season than any other factor.

Depending on the election results, and whether that result is for the consumer’s favored candidate or not, there may be some brief impact, but this will likely be overwhelmed by any impact COVID-19 is having at the time and for each consumer’s personal financial situation. All of this is even more incentive for retailers to bring the shopping season forward and to entice consumers to shop early.

Sorry, I just can’t see this conversation happening. I don’t doubt the election is consequential — at least longer term — but I don’t see that having much to do with consumer spending in the short term. What DOES matter, of course, is the current medical crisis/flagging state of the economy, but at this point that’s pretty much an exogenous event.

I believe the outcome of the election will have a major impact on holiday spending. Many shoppers will be disgruntled, should their candidate lose, and I’m one of them. People are so upset with this election cycle many are considering emigration. Holiday shopping is the least of our worries.

Braintrust
"Nothing short of a civil war or overwhelming natural disaster will stop, or even hinder in a major way, sales during the coming holiday season. "