7-Eleven franchisees have to pay up to stay in business 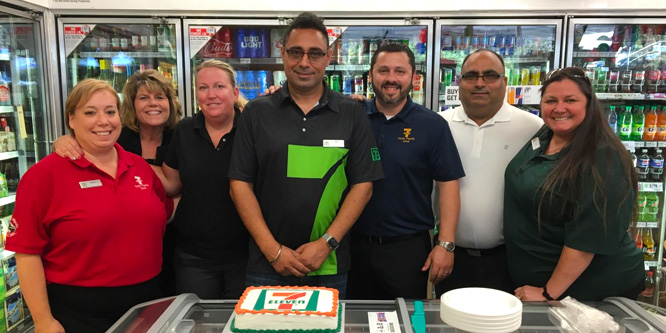 If 7-Eleven franchisees want to keep doing business under the chain’s moniker, it’s going to cost them, thanks to some controversial new stipulations in the company’s franchise agreement.

7-Eleven franchisees will be expected to pay a $50,000 renewal fee in accordance with the new deal, which goes into effect in 2019, according to the Orlando Sentinel. Stores will also be expected to share more revenue with corporate (up to 59 percent for higher-performing stores) and to stay open on Christmas.  The chain asserts that franchise owners made more money last year collectively than ever before. The conflict with corporate has caused concern and outrage at the National Coalition of Associations of 7-Eleven Franchisees convention in Florida.

The latest blowback against 7-Eleven corporate is not the first big disagreement between franchisees and the home office.

Late in 2017, the same 7-Eleven franchisee group holding the convention (which represents almost 7,000 U.S. stores total) sued the parent company, according to Convenience Store Decisions. The lawsuit alleged a power grab by management that was removing stores’ ability to hang on to money they generated, causing franchisees to take a hit on pricing and cover credit card processing costs among other complaints.

But the lawsuit, which hinged on the organization’s belief that franchisees were mischaracterized as independent contractors rather than employees, according to CSP Daily, was thrown out earlier this year. The court concluded that a franchisee agreement alone does not create an agency or employment relationship.

The changes to the franchisee agreement come in the wake of some other unprecedented moves from the home of the Slurpee. In January, 7-Eleven announced the acquisition of 1,030 stores previously owned by Sunoco. This represented the largest acquisition in 7-Eleven’s history, boosting the total store count up to around 9,700 in the U.S. and Canada.

The chain has also been pursuing technological enhancements to keep pace with rising customer demands for convenience. Last year, 7-Eleven began testing a mobile app at 10 locations in Dallas, Texas that allowed for pickup and delivery.

DISCUSSION QUESTIONS: Is making increased demands on franchisees a good move by 7-Eleven corporate or has it fallen out of touch with the needs of the individuals running the convenience chain’s stores? What can other chains operating on a franchise model learn from this situation?

Please practice The RetailWire Golden Rule when submitting your comments.
Braintrust
"Wildly profitable franchisees are the best marketing tool a franchisor could have. So 7-Eleven pushing a 'pay to stay' strategy makes no sense."

"Raising franchise prices makes sense if they re-invest that in capabilities that help all franchisees."

"Why would you want to irritate your best-performing franchises who surely help you recruit new franchisees and expand the business?"

It is in no one’s interest to have a combative relationship with their franchisor. Move on or follow the program; franchise agreements are based on “do this, don’t do that” without wiggle room. They forget that’s how you build a franchise — consistency. And I applaud their requirement to be open on Christmas. Don’t these franchisees know about Amazon Go coming to their area soon? Geez.

Franchise relations can be antagonistic at the best of times, but making what appears to be dramatic, sweeping demands on franchisees certainly won’t improve relations. As the franchisor, 7-Eleven corporate has the right to change policies and dictate requirements to franchisees as it sees fit. However, as is clear from this latest case, franchisees can also organize and resist changes as they see fit. While there will always be some push-pull with franchisors/franchisees, the friction is not helpful for either party and can be detrimental to the overall business in the long run.

This sounds like seller’s remorse. The 7-Eleven corporation is now jealous that its franchisees are doing better than expected? Give me a break! What am I missing here?

Friction will always exist in the franchisee-corporate relationship related to products, payments and every other aspect of the business. And negotiating through disagreements is also constant with the pendulum swinging between corporate sending edicts when business is good or listening carefully when business is bad. A consistent culture and standards of behavior go a long way to instilling confidence in brand leadership.

The 7-Eleven brand isn’t all that great. It only really succeeds because it is convenient and because many of its franchisees execute well. Given that the former point of difference may be eroded by Amazon Go and new home delivery methods over the medium term, does it really want to alienate those that make the business work?

Franchisees and franchisors seem to have a natural, “oil poured on water,” relationship — they can coexist, but never blend because of the surface tensions which keep them perpetually separate. That said, in what is almost by nature, an adversarial relationship it makes no sense for the franchisor to get greedy or place irrational demands on the system. After all, wildly profitable franchisees are the best marketing tool a franchisor could have. So 7-Eleven pushing a “pay to stay” strategy makes no sense. What, for example, would happen if the franchise association decided, en masse, to create a new entity … say “6-Twelve” and all drop out of their franchising agreements when they expire? A wise man once said, “Pigs get fed. Hogs get slaughtered.” And that’s the lesson other franchisors should learn from. What’s one of the most popular franchises in America today? Chick-fil-A, which, by the way, has one of the lowest “buy-in” rates in the business. There’s a moral somewhere in that story.

Where would 7-Eleven corporate be without those MVPs?

There is an important point here: the franchisor has a responsibility to guide and offer to independent business people a workable, dependable and profit-producing venture. In the ever-changing, extremely competitive world of grocery and convenience stores, I am sure it is a daunting task. That requires investment in new technologies and strategies on how to merchandise, advertise and operate a retail outlet in today’s markets. I understand the retailers’ positions — however their counter-parts who own (not franchise) stores have the exact same battles, and continual investment demands. I know the hours and holidays are not fun, but that is the business 7-Eleven is in … convenience, and doing what is necessary to make a profit.

The broad statement that the franchisees collectively made more money ignores any changes in the number of franchisees. It would have made a difference in the strength of 7-Eleven’s statement to justify their new agreement is unknown.

What the publicity around the new agreement does is give pause to those that are considering franchising a location from 7-Eleven. Ryan’s statement is absolutely correct. A franchisor’s best sales person is a happy franchisee.

Raising franchise prices makes sense if they re-invest that in capabilities that help all franchisees. If 7-Eleven does a good job of communicating the specific benefits they will use these funds to bring to owners, I believe they can be seen more positively. Retailers need to invest in transformation now, and that costs money. If they don’t raise the fees, but see their relevance decline over the next 5 years, that wouldn’t be an improvement.

“Pride goeth before destruction” is an admonition as true today in the business world as it was when first uttered, and franchisors/-ee’s who overestimate their importance/underestimate the importance of the partner are, I imagine, common. Ultimately some compromise is reached when the arrogance becomes apparent.

As for the specifics here, I really don’t know, but my wild guess would be that “corporate” is overestimating the importance of the 7-Eleven brand. Other than the all important Slurpee, there are plenty of look-alike brands disgruntled operators can turn to … or turn into.

7-Eleven is placing a super premium on stores that have proven themselves. This discounts the franchise model, by punishing success, instead of rewarding success, or at the very least having a flat-line requirement for all stores regardless of performance. Most importantly, corporate should recognize that they are working with a well-organized group of franchisees, who have defined their expectations and their requirements.

When the franchisor wants to charge more fees from franchisees, those franchisees expect to be told what the money is to be used for — for example, new technology investment that ultimately returns the value in some form to the franchise. 7-Eleven corporate seems to have forgotten that key aspect of franchisor/franchisee relations. It’s always a push/pull relationship that has to be carefully balanced.

Another example of when franchisors choose to do this is to weed out underperforming franchises, however, in this case, it seems they are trying to extract more money from their most successful franchises — and that’s just baffling. Why would you want to irritate your best-performing franchises who surely help you recruit new franchisees and expand the business? The convenience store business is not an easy one and franchise owners have many brands to choose from now so we could certainly expect a revolt here and see many 7-Eleven’s rebrand!

Braintrust
"Wildly profitable franchisees are the best marketing tool a franchisor could have. So 7-Eleven pushing a 'pay to stay' strategy makes no sense."

"Raising franchise prices makes sense if they re-invest that in capabilities that help all franchisees."

"Why would you want to irritate your best-performing franchises who surely help you recruit new franchisees and expand the business?"