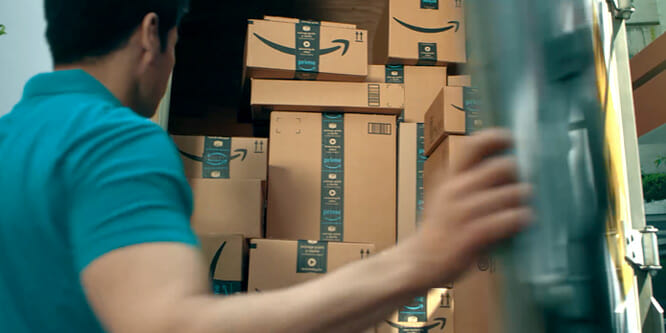 Amazon.com wants to make sure anyone who wants to shop online can do so. The e-tail giant has taken its latest step in democratizing retail by offering a substantial discount on monthly Prime memberships to Americans who are Medicaid recipients.

Yesterday, Amazon lowered its $12.99 charge for Prime members on its monthly subscription program to $5.99 for the tens of millions of people in the U.S. who are on Medicaid. Last year, Amazon made a similar move in reducing its monthly subscription program to $5.99 for Prime members enrolled in governmental assistance programs such as WIC (Nutrition Program for Women, Infants and Children) where funds are distributed to participants using electronic benefit transfer cards.

Amazon says people interested in the Prime discount will need to upload images of their Medicaid or EBT cards on an annual basis. The e-tailer is capping the monthly discount for Prime members on government assistance at four years.

Amazon has used its Prime memberships, which offer free two-day shipping and access to other perks, to generate more frequent purchases on the site.

Prime memberships in the U.S. have grown to 90 million, according to Consumer Intelligence Research Partners (CIRP). Sixty-three percent of all those shopping on Amazon belong to the program. Prime members spend an average of $1,300 a year with Amazon, nearly double the average $700 the site generates from a non-member.

Amazon’s outreach to Medicaid recipients and others in programs intended to act as a social safety net could make the site more affordable to millions of consumers who wouldn’t normally be expected to shop. The average Prime member makes $83,000 a year, according to a Seattle Times report, which named Morgan Stanley as its source.

DISCUSSION QUESTIONS: How successful do you expect Amazon to be in attracting people on government aid to become monthly Prime members? What will the initiative mean for Amazon and its competitors? How might it affect the consumers who become Prime members as a result?

Please practice The RetailWire Golden Rule when submitting your comments.
Braintrust
"Amazon isn’t doing this strictly out of the goodness of its heart, but it should be lauded for its decision."

"If I were an exec at ANY pharmacy or surgical supply, I’d be circling the wagons and fast."

"...this is a move to gather future customers and insights on those customers for their growing push into healthcare."

It’s hard not to admire this move by Amazon. I think this will make a difference for millions of Americans and I applaud Amazon’s initiative. In this case, Amazon’s move will likely cause other major competitors to respond, which will bring down pricing for countless more Americans.

I commend Amazon for offering this discount. No doubt those living on government assistance and Medicaid patients will take advantage of the offer. But what’s nice to see is Amazon saying “hey, you’re important to us as is everyone else and we want to make it a little easier for you to become part of our family.” There should be plenty of goodwill that will come out of this, not that Amazon needs publicity. But for those who see Amazon as nothing more than a greedy machine attempting to drive all others out of business, this might make them might step back for a moment and say, “hey, that was a nice gesture.”

If you have access to a computer, Amazon wants you to become a Prime member. This announcement by Amazon challenges the retailers that traditionally get business from aid recipients, and strives to make them Amazon customers for life.

The real question is, how much money does the demographic set of those who qualify for Medicaid earn annually? Do they shop Amazon? This move has limited appeal but is a very good public relations tool.

Exactly what I was thinking.

While Amazon sees an economic benefit for itself with this move, the Prime discount ought to be beneficial to new members. I don’t know how much overlap exists between Medicaid recipients and SNAP participants, but (among other things) this might help address the “food desert” problem in many central cities. And for those on Medicaid with mobility issues, this is a positive development.

Again, Amazon isn’t doing this strictly out of the goodness of its heart, but it should be lauded for its decision.

On the one hand, it’s a nice move to make the convenience of Prime delivery more affordable for those largely with lower/limited incomes. From the other perspective, this is one of the world’s biggest, most powerful corporations that is moving into pharmacy. While I hope those on Medicaid wanting the service get the most out of it, I think this is positioning Amazon as their trusted supplier when it starts offering prescription services.

If I were an exec at ANY pharmacy or surgical supply, I’d be circling the wagons and fast.

Amazon’s plan is not to take over the healthcare industry but to forward the push for industry change. This is the beginning of the Jeff Bezos, Warren Buffett and Jamie Dimon push to alter healthcare with their influence and abilities to innovate faster than large healthcare corporations. In the end it will be better care, cost and competition for American healthcare recipients and very overdue.

Basic purchase metrics make it easy to question the value of this for Amazon. (Theoretically, shoppers who qualify for Medicaid must show very little disposable income and less than $2,000 in a bank account. Not exactly what you would think Amazon has in mind for the Prime service.) Instead, this suggests one of two things. Either Bezos is extending his altruism to the Amazon business model, or Amazon is making enough working margin from even lower-volume shoppers to make getting them into the Prime program worthwhile. I admire Bezos, but I’m going with Door #2.

This isn’t a move by Amazon to get more shoppers (although they will) — this is a move to gather future customers and insights on those customers for their growing push into healthcare. Wait until their new health platform lands. These folks will now be part of the initial consumers. THAT is the new direction for the “retailization” of healthcare.

Prime’s lowering of its membership cost for these individuals and their families is a good thing. The people impacted get an opportunity to participate in something that up until now their economic situation prevented them from doing. It has been noted by others as an inclusive move. It is definitely a win, financially and mentally, for these individuals.

However it is not altruism. Amazon garners positive publicity rather than being hailed as the harbinger of the death of brick-and-mortar retail. It also gains Prime members who the research has shown are likely to spend more money with them.

This move removes the excuse “high membership costs” as to why people won’t use Amazon prime and should increase their customer base. By lowering their costs, Amazon looks to capture more EDLP shoppers from WM and other low price retailers.

Six dollars a month doesn’t seem like a lot, especially for people on a limited income who can substitute home delivery for one or two monthly trips to a store. Also, those who have been paying for delivery (if there are any), would save two ways. My question is, will suppliers get another point share to cover the cost?

I’d love to see Amazon offer the same to Medicare recipients as well. The over 65 demo has many needs and Amazon could really be a helpful partner by offering easy access to products and even services.

This is a very “customer-focused” decision. The perks of a Prime membership cost Amazon. The fact they are willing to “give back” with a substantially reduced fee to people who might find the regular fee a hardship is commendable. It’s always nice to see big companies giving back to the community.

Great PR initiative that will allow even more consumers to take advantage of Prime benefits. As Amazon adjusts their grocery strategy, I see this being immensely valuable for more convenient access to groceries and provides Amazon with an additional layer of data for their healthcare efforts.

Amazon with the UBI state that’s coming in the 2020s is going after the discount shopper and Walmart’s customers in many new ways. The average Prime member spends $1,300 a month, and its new checking account will target students.

Discounted Prime for people on food stamps and Medicaid are simply new ways to serve the masses.

When peak automation hits you understand that’s millions of jobs lost on the front lines of transportation, retail, finance and other verticals. The “everything store” will be there to catch them.

According to Amazon, the company’s goal is to give more people access to “aspects of the digital economy — some conveniences and benefits — that a lot of us take for granted.”

Also important, Amazon is competing with Walmart and other value-priced retailers, for the slim wallets of those with less disposable income. Amazon is a “for profit” company. This move is not altruism; Amazon Prime is reaching a saturation point with upper and middle-class Americans. For membership to continue grow, Amazon must attract new customer segments.

Conversely, Walmart has a huge penetration of lower-income consumers, their growth is targeted, in part, by moving upscale with acquisitions including ModCloth, Bonobos and Jet.com.

Braintrust
"Amazon isn’t doing this strictly out of the goodness of its heart, but it should be lauded for its decision."

"If I were an exec at ANY pharmacy or surgical supply, I’d be circling the wagons and fast."

"...this is a move to gather future customers and insights on those customers for their growing push into healthcare."