Are retailers and landlords destined to head to court over rents? 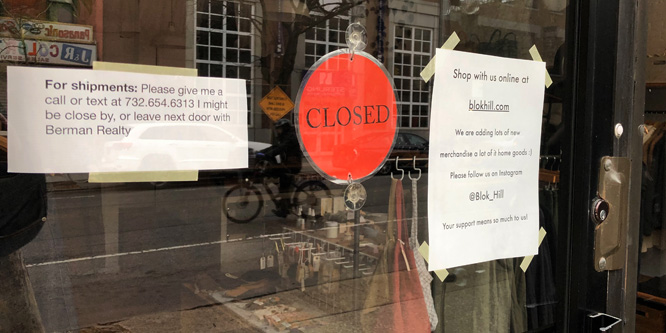 Many retailers and restaurants, particularly those that were struggling before the coronavirus pandemic hit the U.S., are in dire straits as the virus continues to spread across the nation. The fallout is affecting almost every aspect of society and the cost to the American economy continues to grow as medical authorities and government officials seek ways to mitigate the damage. Despite valiant attempts from all sectors, the business news is not good.

A new report from Moody’s Investors Service concludes that the current situation is more dire than the financial crisis that hit the U.S. in 2007 and 2008. The credit ratings service has revised its outlook for the broad retailing industry downward, predicting overall sales ranging from flat to down three percent for the year and for operating income to fall between two percent and five percent.

“Even prior to the COVID-19 outbreak, retailers were already fighting hard to shore up market share and margins. The one bright spot for the industry had been a strong consumer backed by a healthy US economy and low unemployment — strengths that have evaporated overnight with the onslaught of the coronavirus pandemic,” write the report’s authors.

Store closures are expected to have a dramatic ripple effect across the economy.

“Temporary store closures due to government-mandated stay at home orders will lead to lost sales and inventory markdowns, which will weigh heavily on topline and profitability,” according to Moody’s. “Retailers with closed stores have fixed costs such as rent. This cost cannot simply be curtailed just because the store is closed, which will only compound losses, although we expect many retailers to seek relief by renegotiating leases with their landlords.”

According to a Bloomberg report, retailers and restaurants including Mattress Firm and Subway are asking landlords to amend leases to reflect the new coronavirus reality. Some companies may attempt to invoke “force majeure” clauses in their contracts to delay or reduce payments due to an unforeseen event.

“The court system is just going to get flooded with a million of these disputes between tenants and landlords,” Vince Tibone, an analyst at Green Street Advisors, told Bloomberg. “If the government doesn’t step in in any form or fashion, it could get ugly. They need to respond quickly.”

Neither recently passed legislation nor the new measures being voted on by the Senate today specifically address rent payments.

DISCUSSION QUESTIONS: What should retailers that have had to close stores due to the coronavirus be doing now? Do you expect to see a large number of legal disputes over rents between retailers, landlords and insurance companies? Should the Federal or state governments intervene?

Please practice The RetailWire Golden Rule when submitting your comments.
Braintrust
"Landlords, learn to negotiate; it will be cheaper than the lawyers' fees, and you cannot collect rent on empty space."

"This is a very serious problem. Those merchants who have shut the doors and walked away for good will have some serious complications."

"It’s unlikely that businesses will be opening up stores any time soon, so landlords would be smart to work with their current tenants as much as they can."

14 Comments on "Are retailers and landlords destined to head to court over rents?"

Yes, there will be a wave of disputes between retailers and landlords resulting from store closures. For the largest retailers/chains, they have leverage that can be applied to mitigate rent costs; not so for small and independent retailers who are at the mercy of their landlords. Furthermore, it should not be forgotten that landlords are businesses too, with staff to pay and expenses. This will be a tremendously difficult problem to solve.

Yes, the federal/state governments can help by enacting special rules during the crisis, but these will be hard to roll out for everyone and will take time.

Three bills have been passed already and it is widely expected another couple could emerge as well. While I expect action at the state level it boggles the mind an inflexible landlord would rather sue and lose a retailer than try to work something out. One thing I am sure of is that on the other side of the virus, there won’t be a stream of new retailers looking to fill empty storefronts. Better to get reduced rent and be a partner than have no rent and be seen as Mr. Potter.

I agree! For all the participants at every level of the economy there is a need to share in the fallout. It makes no sense to hold firm on contractual terms that further jeopardize recovery – for both tenant and landlord.

Landlords need to come to the realization that rents have been too high in light of the questionable retail climate as evidenced by the number of bankruptcies and continuing store closures. My philosophy on this is very simple. Some percentage of the whole is better than 100 percent of nothing. Landlords, learn to negotiate; it will be cheaper than the lawyers’ fees, and you cannot collect rent on empty space.

There is no doubt that the impact of lost revenues due to store closures during the COVID-19 pandemic will drive many chains into bankruptcy and rent payments will add to their financial woes. It will be in mall owners’ best interest to negotiate with retailers to save tenants.

We don’t know a lot of details about the $2 trillion stimulus deal that was passed today, but it probably doesn’t cover rent payments during the pandemic. Government intervention may be needed in some cases. This is all new territory for our country.

As we are writing today, the government is closer to passing their stimulus package which, if it passes, should provide some help to businesses faced with financial challenges, including paying rent during these horrible times. That said, the first step is communication. If a company cannot pay their rent because their store or business is closed, they should reach out to the landlord before the landlord contacts them. Be upfront and do everything possible to negotiate a solution. Try to get a grace period of three months for not having to pay the rent and then work out an arrangement to pay that money back over time if the landlord is insisting on getting paid. Most court cases won’t be heard for a very long time, and I believe most judges will side with the tenants, so landlords should think through whatever legal action they may be thinking about taking. As for the landlord, it will be in their best interest to protect their tenant because when this is over, we will probably have much… Read more »
1
|
0
-   Share

No doubt there will be many disputes between retailers and landlords. Without government intervention, I don’t see a successful path for either group, however, from the landlords’ perspective, I doubt they will have an excess of retailers knocking on their door post-virus to sign up new leases for more stores. With that in mind, it’s really in the landlord’s best interest to work with the retailers they have to help keep them open and running as a business. This won’t be an easy problem to solve but everyone will need to make compromises if the economy is going to survive this crisis.

Ricardo, that is my take as well. Struggling storefronts and landlords need to work together. It’s unlikely that businesses will be opening up stores any time soon, so landlords would be smart to work with their current tenants as much as they can. A legal dispute just adds costs to each side.

I’m on the same page as Ricardo and Meaghan. In addition to costs, the time element makes my head spin. What we don’t want is a system lag after a system shutdown.

This is a very serious problem. Those merchants who have shut the doors and walked away for good will have some serious complications. My only hope is that they were smart enough to negotiate the right to sublease the space or negotiated the right of lease assignment to another tenant, with permission not unreasonably withheld, which means the new tenant must be as financially strong as the first tenant at the original lease closing. I have seen some horrible stories. Lastly, the current tenant can talk to the landlord about reverting temporarily to a percentage of sales lease; such as 6 percent of credit sales and 8 percent of cash sales, with a clause to pay the difference at a later date. But all in all, this is a horrible dilemma these retailers are faced with.

All businesses are under immense pressure, and that includes landlords and retailers. As such, everyone should work together to find solutions. Unfortunately, there will be some that show inflexibility and it is here that disputes will emerge. From the perspective of a retailer, it is not unreasonable to expect rent to be reduced when stores are closed and unable to trade. From a landlord’s perspective, it is not unreasonable to expect something to be paid. There is a middle ground here, but parties need to work together to find it and both need to make sacrifices. If they don’t it becomes legal which adds to costs and sours future relationships.

I see an opportunity for mass real estate negotiation and new practices between landlords and retailers. Given the current and longer-term market factors, supply and demand a new model needs to be developed for all parties.

At this early stage, I would think it would mostly be “tough luck”: sales are down — to zero in many cases — but leases are contracts, and absent specific language to the contrary, the payment is due. If the shutdown(s) lasts for months, then we could see mass defaults, and perhaps some intervention will happen. There will be plenty of disputes, and much litigation.

As Rich Kizer noted on this discussion, the ideal situation for BOTH a retailer and a landlord is a partnership arrangement where the “rent” the former pays is simply a percentage of sales. The Federal Government should impart a fair percentage across the board so that both parties become partners rather than adversaries. Our courts will never be able to handle the onslaught of an economic disaster of this magnitude. The long-term effect of the mandatory agreement would be positive long after this pandemic is over.

Braintrust
"Landlords, learn to negotiate; it will be cheaper than the lawyers' fees, and you cannot collect rent on empty space."

"This is a very serious problem. Those merchants who have shut the doors and walked away for good will have some serious complications."

"It’s unlikely that businesses will be opening up stores any time soon, so landlords would be smart to work with their current tenants as much as they can."