Are ‘veggie burgers’ and ‘oat milk’ confusing to consumers? 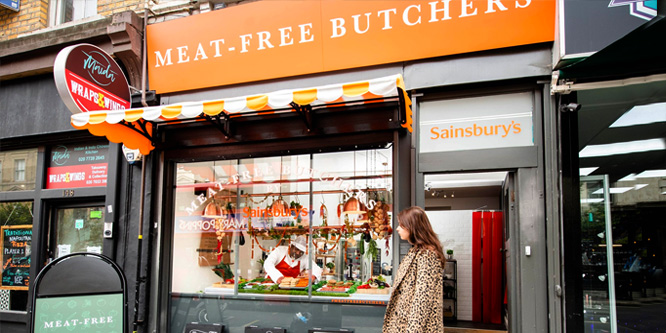 The growing popularity of plant-based alternatives to meat and dairy beverages is taking share of market from the companies that produce the real things. Many producers selling animal-based products object to plant-based alternatives being able to use terms such as bacon, burgers or milk in their marketing. Conflating the real thing (animal-based) with an unrelated product (plant-based), they argue, leads to consumer confusion and damage to their businesses.

While companies marketing products made from animals are on the defensive, they do have allies. In Mississippi, a law was passed that prohibits companies selling plant-based alternatives from using meat terms in labeling or marketing. Violators of the law could face up to a year in prison and a fine of $1,000. The state has not yet begun enforcing the ban.

Upton’s Naturals, who manufactures meatless alternatives, and the Plant Based Foods Association have filed a suit against Gov. Phil Bryant and the state’s Commissioner of Agriculture and Commerce, Andy Gipson, which claims that the restrictions on what companies can call their products violates free speech protections under the First Amendment. The intent of the law, the parties argue, is to restrict competition.

The law’s supporters argue that it is about clarity and clearly defining meat as containing animal-based ingredients. The previous system in the state , they argue, may have led to confusion among consumers who were unclear about the distinctions between meat and meatless.

“We have not had a single complaint from any consumers about any kind of misconception about what our products are,” he told the Associated Press.

In December of last year, a federal court dismissed an appeal that would have prevented Blue Diamond Growers from using the term almond milk. Sales of cow-based milk have been declining for years as more consumers choose plant-based alternatives. Some dairy producers, reading the writing on the wall, have adapted by turning out dairy-free alternatives of their own.

DISCUSSION QUESTIONS: Should makers of plant-based alternatives to meat and dairy products be able to use terminology such as burgers or milk in their marketing or is it confusing to consumers? Which approach benefits food retailers more?

Please practice The RetailWire Golden Rule when submitting your comments.
Braintrust
"Does soy milk come from cows fed on a diet of soy, or from soy trees? Is milk chocolate the same as chocolate milk?"

"As far as I am concerned, so long as something is very clearly labeled it’s fine. "

15 Comments on "Are ‘veggie burgers’ and ‘oat milk’ confusing to consumers?"

Until there is the inevitable regulatory mandate (no, I’m NOT suggesting there be ANY more regulation put in place by the Feds or local government), I think it’s a good thing that shoppers can find alternatives to meat and dairy easily by brands using these descriptors.

I have no problem with the use of terms like “meatless meat” or “almond milk.” I think those lobbying against such terms are vested interests, such as the farming industry – or people with far too much time on their hands.

As far as I am concerned, so long as something is very clearly labeled it’s fine. And manufacturers and retailers generally do a good job of labeling and defining products.

Bottom line: the increase in choice is good for everyone, even it means more competition for traditional products.

There is no doubt that the meat and dairy industries have gone on the offensive against plant-based alternatives. I have read more stories about how “beyond burgers” aren’t really as “healthy” as beef since its IPO.

I think these lobbying efforts (that’s all they are, let’s face it), should be squashed. Since when do meat producers get a trademark on “burger?” And why does “milk” have to be dairy, exactly? It’s just a word.

And in case you’re wondering, I don’t eat meat, and I do eat cheese (never been fond of milk, but love my half-and-half). And Beyond Burgers are crazy good.

When we as a society want to allow or promote something the people (or a portion thereof) consider a “greater good,” we are humorously willing to convolute our own standards and logic. We rail against GMO products as not being transparently labeled, yet we call attempts to call something that isn’t meat “meat” or milk “milk” a violation of First Amendment protected free speech. And yes, legislation promoted as providing “clarity” to consumers has a protectionist intent to it. The frailty of our system of laws and government is that they are always subject to bending by the desires and advantage of one faction or another of society. Until someone invents a cure for human nature, perhaps that’s the best we can do. But we could at least admit it to ourselves.

No, no, and no. If it has no meat it is a veggie patty, not a hamburger. Don’t confuse the people. This nomenclature smells of an attempt to satisfy those who won’t eat meat but still crave a hamburger!

I don’t believe oat “milk” and veggie “burgers” are so named in an attempt to confuse the people, nor do I believe consumers are confused by the nomenclature. These vendors are merely marketing their products by using common industry terms for cloudy liquid substance and flat, round patty. What’s wrong with attempting to satisfy those who won’t eat meat but still crave a burger?

Milk comes from cows. Almond milk does not come from cows, but critics of almond “milk” have a point. It’s technically not milk. Are burgers meat? If so, veggie burgers and turkey burgers are mis-named. They should be called veggie patties and turkey patties. Technically yes, according to some critics.

All of the critics are in the food business and are crying foul. Consumers understand the difference between plant-based food and traditional food. They are not confused.

To me there are two different definitions to be found in these examples. But first and most importantly, all products should be clearly labeled in a way so consumers know exactly what they are.

To me “burger” is more about the shape than the ingredients. Maybe even more about the servicing. To me having a burger means having a patty on a bun, no matter what it is — burger, veggie burger, chicken burger, turkey burger, etc…

The “milk” issue is something a little different. Milk is a very specific drink, coming from a female mammal and having certain and assumed nutritional value. Oat, almond, and all the substitutes are exactly that, SUBSTITUTES, and should not be labeled “oat milk” but “oat based milk substitute.”

Any company who advertises “meatless meat” will discover push back at some point. An inherent lie in a name never goes well. Those who have adopted this have done so to ride the VC and investor hype which comes from vast over-statement and they probably don’t realize they have sealed their own doom. (Really? Peas are the primary ingredient? Is this baby food?)

What about “veggie burgers”? Customers understand these alternate statements. I hope the push back goes where it matters (“meatless meat”) not after the already understood products.

I’ve always been confused by Milk of Magnesia and Milk of Bismuth. Put it in my coffee once, and it was terrible. Does soy milk come from cows fed on a diet of soy, or from soy trees? Is milk chocolate the same as chocolate milk? Where does chocolate milk come from? Or Milk-Bone biscuits? Shaving cream? And what about nut meats? That’s the real meat of the matter. It’s so very confusing. I hope Congress can get together a majority somehow and protect us from these horrible dangers.

Well-observed, Warren. You have accurately minced the meat of this issue. I have serious doubts that our legislators possess sufficient wisdom or subtlety to craft a sensible nomenclature law without creating chaos.

The acceleration in plant-based options is creating a lot of confusion and push-back if only because there are so many options (which is a great thing in my book). The defensive crowd likes to dwell in the must-be-healthier realm which puts many plant-based alternatives at a disadvantage. Ground meat is simply wrapped and sold. Alternatives are labelled with nutritional and caloric breakdowns. Some plant-based foods are healthier, some technically aren’t (though defining individual and collective “health” is a whole ‘nother topic). The assumption that all plant-based products are making a health claim by their very existence is false. Some are designed to simply taste good. Also false is the assumption that anything called a “burger” or “milk” (or pick your term) is going for tastes-just-like status. Some are different and delicious in their own way. Saying that plant-based companies can’t use particular terms is ridiculous. That’s like saying you can’t call something a “chip” unless it is made from potatoes. “Milk” also naturally comes from plants and I’m not hearing a blow-back on botanists. Nuts… Read more »
0
|
0
-   Share

Whatever the merits of this kind of buttinskiism — and that I’ve used that term says a lot of how much merit I think it has … or doesn’t — it should be at the federal level.

But let’s all take a day off from such talk and celebrate our freedom from government overreach … Happy July 4th, everyone!

Oy! Sounds like the animal products industry is trying to pour chilled milk over the red-hot vegetable protein industry. Public legal shaming over nomenclature is a great way to instill FUD in the public and deter the investor community that has been going bananas over meat-like food products.

If you have a big stake in bovines, why not attempt to strong-arm your representatives into legislating the dictionary? While they are at it, they can add newspeak adjectives like “chocolaty,” “cheezy,” and “fruity” to the banned list.

Oh wait — I just received a cease-and-desist letter from from the tropical fruit PAC demanding that I retract the term “going bananas” because it’s deceptive and confusing. For clarification I declare I have no evidence of bananas being involved in the pea-protein-and-beets industry.

Using improper adjectives to describe a product is clearly confusing to consumers and causes marketplace branding and category definitions to lose simple understanding in the consumer’s mind. Marketing this way is not protected under our freedom of speech, but instead a deliberate attempt to confuse and obfuscate the obvious. How can bacon (which comes from pork bellies) come from anywhere but a pig? Using this type of logic means that I can use the label “bacon” to describe peanut butter, beef, lamp, fish, etc. There are no parameters, no defining clarifications on what bacon is, or what it cannot be. The same applies to milk (which comes from an animal, usually a cow). Soy milk, coconut milk, carrot milk, almond milk, etc. all confuse the category and are a poor use of the word milk to cannibalize the historical and intended use of the dairy product milk. We see this abuse all around us and it needs to stop. Simple use of common terms must be enforced at each category level and the FDA should… Read more »
0
|
0
-   Share

Braintrust
"Does soy milk come from cows fed on a diet of soy, or from soy trees? Is milk chocolate the same as chocolate milk?"

"As far as I am concerned, so long as something is very clearly labeled it’s fine. "