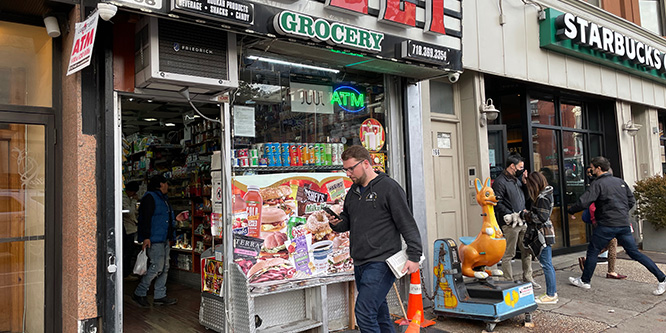 Bodegas are go-to spots for snacks, sandwiches, household necessities and other quick purchases in New York City. But the city’s iconic, often cluttered mom-and-pop convenience retailers are growing concerned that they are on the way to being replaced.

Business associations representing bodegas throughout New York’s five boroughs are asking the city for financial help and expressing concern that ultra-fast delivery may threaten bodega operators’ livelihoods, according to Brownstoner. The group United Bodegas of America anticipates thousands of family-owned bodegas closing within six months, as customers opt for 10-20 minute delivery rather than stopping by the bodega a few blocks away.

The group and other business associations also want the city to help implement technology that will allow bodegas to remain competitive in today’s business environment, such as apps that facilitate online ordering from their businesses. One such app, called My Bodega Online, already serves a handful of bodegas in the Bronx.

The growing number of ultra-fast delivery services in the city generally offer either delivery from nearby major retailers and restaurants or deliver a product assortment that they keep in their own warehouse.

While small independent convenience stores throughout the rest of the country do not necessarily have the same dependence on foot traffic as bodegas, it is possible to imagine ultra-fast delivery cutting into stop-in shopping for essentials there as well.

On the other hand, services that once looked poised to steal share from the convenience store space have not proven to be a major problem so far.

Amazon Dash buttons, for instance, meant to facilitate the easy, store-free reordering of household essentials — many of which might be purchased at a convenience store or bodega — failed to catch on. Amazon launched the technology in 2015 and killed it in 2019.

There is precedent, however, for app-based services disrupting fixtures of urban living once thought to be unshakable.

Rideshare services like Uber and Lyft quickly destabilized the taxi industry within a few years of their introduction.

And yet, there does seem to be some indication of app-disrupted industries being able to bounce back. Taxis appear to be growing more popular again, at least in Chicago, as popular rideshare services increase prices, CBS Chicago reported.

DISCUSSION QUESTIONS: Do you think the concern bodegas have about being pushed out of existence by ultra-fast delivery is warranted? What can bodegas and other mom and pop c-stores do to remain relevant in the face of ultra-fast services?

Please practice The RetailWire Golden Rule when submitting your comments.
Braintrust
"We New Yorkers certainly like our conveniences – be it fast delivery at any time of the day/night or the corner deli/bodega. There is still a mix of both in most neighborhoods"

"When COVID-19 passes, the concept of having a robot deliver a candy bar will seem absurd."

"If I were a bodega owner I would be concerned, but not terrified, at least not yet."

The impact of ultra-fast delivery is a real concern for bodegas and really any business that doesn’t have delivery capabilities. The convenience of online ordering and delivery or curbside pick-up is becoming a customer expectation and habit. This trend is impacting almost all segments of retail and restaurants, causing operators to redefine their operating models.

I don’t think so, but then I’m looking at it as a tourist. There are so many bodegas that it’s very easy to just stop in on your way home. Plus, in NYC, generally it’s nice to have a reason to go out.

We New Yorkers certainly like our conveniences – be it fast delivery at virtually any time of the day or night or the corner deli or bodega. There is still a mix of both in most neighborhoods. New Yorkers are also impatient and like to get out into their neighborhoods, so the corner deli or bodega will always be a go-to spot when you need a few items. The last thing we need in this chaotic town is more motorized delivery bikes and scooters taking over our streets and sidewalks.

I’ll predict that the delivery craze — “get it in less than two hours!” — is a passing fad. When COVID-19 passes, the concept of having a robot deliver a candy bar will seem absurd.

The beauty of bodegas is that they serve a focused community and it’s all about convenience and proximity to the shopper.

They don’t need to keep up with the Joneses but they can learn about the customer in a way that the large retailers can’t. They can talk to them and develop a physical/personal connection in order to serve and meet the customer where and how they want to shop.

Preorders, fast delivery, and personalized product mix are a few opportunities for a bodega to step it up.

Lightweight tech solutions like My Bodega Online are good solutions, as they’re specific to the store type. I’m a board member of the Boston Main Streets Foundation and we are engaged in a technology innovation project that provides the retailers in the 20 neighborhoods of Boston access to state of the art technology to compete and win in what has become an increasingly complex environment. I believe mom and pop retailers are indeed threatened by both fast delivery as well as large chains, so they need tools like these to play to their strengths. Big Grocery excels in so many aspects of retail, but playing an authentic role in the daily routines of neighborhoods is not one of them.

Feeling safe walking around on the streets is a bigger problem. With increases in COVID-19 cases, deaths, and protocols, people spend more time at home with fast delivery being a desirable option. People would rather be out and about stopping somewhere that strikes their fancy or smells really good rather than paying a delivery fee. As long as people feel they need to stay home the fast delivery is likely to be a problem for bodegas.

I have said it before and I’ll say it again: Some retailers are doing everything possible to keep shoppers out of stores. You want it in 10 minutes? No problem but you’re going to pay for it.

Convenience became king during COVID-19 and it’s not going away as retailers try harder and harder to top the latest offering. The good news is not every customer relies on quick delivery, at least not every time.

It’s interesting that you mention the cost of Uber versus cabs. When we were in Las Vegas last month the cost of an Uber to take us a couple of miles away was at least triple what it had been earlier in the day. We switched back to cabs. People aren’t stupid, we know when things like cost are getting out of hand and move to the alternative.

Then there was that time in Minneapolis that Uber made me pay a security fee! So I wouldn’t die, I guess.

That’s crazy! So were the Uber rates that went from $9-13 mornings and mid-day to over $70 after 6:00 pm to take us from the Westgate to the center Strip. Surge pricing and resort fees stink.

For those familiar with the cultural experience and community appeal of bodegas in NYC, I would say that they have less reason to fear than other retailers. Why? Because no ultra-fast delivery can replace the “feeling” that one gets strolling the streets of New York and wandering into a local shop.

That said, bodegas cannot stick their heads in the sand. There is plenty of room for reinvention of this age-old retail fixture of the city. Inventory can be refined, lighting and shopping environment improved, signage and street appeal enhanced. I’m not saying that they should take their uniqueness out of the mix — just freshen it up a bit and stand out from the crowd!

Disruption takes many forms, and just because one service offers 10-20 minute delivery doesn’t equate to bodegas folding. If anything, these new services and ways of working will spur a whole new wave of innovation for retail, bodegas included. I’ve written before that 10-20 minute delivery is fraught with issues and may not be around for long. But bodegas shouldn’t be waiting for the city or someone else to save them. Rather, they should always be looking for ways in which to create better experiences and offer unique products/services that distinguishes them from others. Isn’t this what retail is all about?

If I were a bodega owner I would be concerned, but not terrified, at least not yet. First of all I would figure out how much of my business was at risk, i.e., not just folks coming in because they happened to be passing by. Many bodegas are located below residential units so the odds are many people will shoot downstairs to a.) save time and b.) skip the delivery cost. Also bodega owners could offer their own delivery system limited say to the block they operate on. And there is the practical fact that, especially during the day, parking – and sometimes just movement – is tough in New York so going to the bodega may still be a faster alternative.

Fast delivery should be a concern for any retailer (as well as some B2B businesses). It’s about convenience. People will pay for that. So, the bodegas need to find ways to overcome that or any other type of competitive disrupter. Providing specialty items that are only available at their bodega and creating a loyalty program seem like a good place to start. So many of the bodegas depend on street traffic and a very localized customer, so the impact from ultra-fast delivery may not be felt as much compared to other retailers. Still, they must prepare.

We just may see the typical digital reality. A business model which cannot be profitable (low cost instant delivery) kills traditional businesses which supply tremendous value only for instant delivery to die for lack of profit. In the end, the world is poorer for having investor grabs for quick riches kill a valuable service to society.

Ultimately the question is “can ultra-fast delivery really be viable?” And by viable, I mean not subsidized by 1) “investors” or 2) exploited gig workers. For the many of us who believe the answer is no — if not NO! — then ultimately this will be a non-issue … not that a lot of disruption can’t happen on the way.

Absolutely right they are worried. If I can get the same items from the comfort of my own home, I will 100 percent choose delivery.

Bodegas needs to make it more interesting for the customer to come to their store than to order goods with delivery. For example, to improve the quality of customer service or to offer customers some unique experience that no delivery will give them.

The second option: arrange delivery yourself.

Braintrust
"We New Yorkers certainly like our conveniences – be it fast delivery at any time of the day/night or the corner deli/bodega. There is still a mix of both in most neighborhoods"

"When COVID-19 passes, the concept of having a robot deliver a candy bar will seem absurd."

"If I were a bodega owner I would be concerned, but not terrified, at least not yet."