Can a rebrand popularize Saks Off Fifth with a new generation? 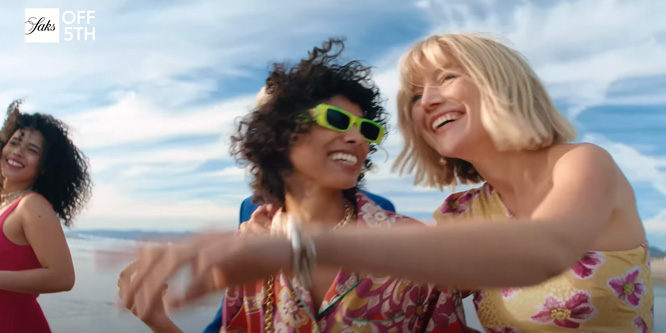 In hopes of appealing to younger luxury shoppers, Saks Off 5th has undergone a rebrand that includes a new tagline — “Where Fashion Takes Off” — and visual identity that embraces a more vibrant color palette.

Off Fifth said in a statement that it surveyed some 5,000 shoppers over the past year and discovered a “significant opportunity to appeal to a younger, fashion-minded core customer.”

The research further showed Off Fifth had an opportunity to reach new customers who see fashion as a hobby.

“They don’t wear designer from head to toe,” Sara Griffin, SVP, marketing, Off Fifth told Adweek. “It’s about mixing and matching pieces as a way to curate their identity and their unique look.”

The “Where Fashion Takes Off” mantra — replacing “Saks Style, For Less” — and related campaign “is really all about self-expression and encouraging our customers to chart their own course and crafting their own identity,” Ms. Griffin told Forbes. Following two years of pandemic-related restraint, she believes there’s a “real moment right now in our culture about celebrating the individual and allowing people to be whoever they want to be.”

The updated positioning comes following a year in which Off Fifth shifted pricing away from high-low to an everyday low strategy. The chain also added Activewear and casual assortments during the pandemic to add more balance to its traditional dress-up mix. Over 500 brands have been added over the past two years with plans for 300 more in 2022.

“We want to be in the mid-tier branded space as well as in that contemporary and designer branded space,” chief merchant Molly Taylor told WWD. “Madewell and Adidas are good examples of mid-tier limited distribution in off-price that really matter to our customer. Our customer still wants brands. They want fashion. They want newness, but we want to serve all occasions as well.”

The campaign is the first update since HBC and private equity firm Insight Partners separated Saks’ e-commerce and store operations last year. Off Fifth’s e-commerce sales surged 50 percent in 2021, boosted by the launch of its first mobile app. Off Fifth also has about 100 locations.

Please practice The RetailWire Golden Rule when submitting your comments.
Braintrust
"With only around 100 Off Fifth stores in the U.S. it is going to be difficult to really appeal and be a leader in the mid-tier space."

"Gen Z enjoys shopping in physical spaces. However will they have the patience to go through the treasure hunt experience at off-price stores?"

"A “rebrand” is not enough for these legacy brands. They need to focus on the lifestyle choices their next generation of shoppers if they want to engage them and stay relevant."

15 Comments on "Can a rebrand popularize Saks Off Fifth with a new generation?"

There has been a step change in the assortments at Saks Off Fifth and the feel of stores is now more contemporary and trend-led. However on the various occasions I have visited, I have not noticed a dramatic change in the mix of shoppers. As such, it is good to see effort around communicating and marketing the new positioning – and much more of this will be needed to shift perceptions about what Saks Off Fifth stands for. Given that Saks Off Fifth has a limited number of locations, online will be a key channel for driving sales from the younger demographic they want to attract. Given the disproportionate benefit, this raises the question of how marketing expenses are split between the separate online and offline business!

A rebrand and an updated merchandising strategy is not enough. Relevant store locations, brand ambassadors and experiences are what will drive more younger luxury customers to the store.

All off-price retailers need to ask the same question when looking to expand into a younger customer base: what will get these customers shopping and embracing the treasure hunt of brands at a great price?

It sounds like Off Fifth is not going the route of seeing itself as off-price.

Agree. It’s a step in the right direction messaging wise, but I see this as an opportunity to make more meaningful changes to the experience and offering to develop a younger demographic.

I like off-price stores. They are clean, bright, and have the right mix of casual and more formal wear. While I see many younger shoppers in the off-price format, I also see a lot of older shoppers in there as well. I hope they don’t make the mistake of completely ignoring the other shoppers who are pretty dedicated shoppers of that format.

They have tied this in the with their campaign perfectly and their “Where Fashion Takes Off” mantra — replacing “Saks Style, For Less.” These taglines tell very different stories and project very different appeals.

With only around 100 Off Fifth stores in the U.S. it is going to be difficult to really appeal and be a leader in the mid-tier space. Other than a few brands having limited OPR distribution right now, where is the real differentiator from existing OPR? It doesn’t seem like a fully formed strategy yet. Adding something like rentals would be a way to also tailor to the younger generation and offer a concept unique to OPR, if they could utilize their high-end designer brands from the regular Saks format.

The physical footprint certainly limits upside. I would consider pouring resources into redesigning the SO5 app (which at a cursory glance looks pretty much the same as the parent Saks app – clean, white, and uninspiring). I don’t think the younger generation will have as many qualms with buying expensive clothes without physically seeing them or trying them on (as long as the returns are easy).

I love surveys. Most of the time if it is a new look or idea, that means potential customers telling you they like or love the idea. But the key is in the register and in climbing the hill to cultivate past and new customers. Telling this story and demonstrating that it is what they want is the big challenge. Saks better have big ears and get it right the first time. Will their deep research make it rain?

Any brand transformation is challenging and takes time to attract, retain and engage with a whole new generation. The challenge for Saks Off Fifth is that they need to meet the potential customers where they are. The lack of a significant store footprint presents a challenge. However the rules of engagement with Gen Z have changed, and they are in the digital playground known as TikTok and Instagram, not necessarily in the outlet centers or malls.

It will be increasingly crucial for Saks Off Fifth and any retailer to focus on execution, refined merchandising and pricing strategies, outstanding customer service, and a competitive differentiation strategy to attract new customers. Gen Z enjoys shopping in physical spaces. However will they have the patience to go through the treasure hunt experience at off-price stores? Let’s see how this plays out.

Rebrands without commensurate action (merchandise, service, rental options) are a waste of energy. I hope that Saks Off Fifth’s new leadership is going to walk the walk …

A “rebrand” is not enough for these legacy brands. They need to focus on the lifestyle choices their next generation of shoppers if they want to engage them and stay relevant. This means moving beyond just updated assortments or deeper discounts. It remains to be seen if any of these department store brand will be able to do this.

I am a true fan of staying true to the heritage of companies and their stories. While I was at RL, conversations always surfaced regarding relevancy and the answer was always: keep the heritage, lose the history. Off Fifth is only there because it is a derivative of the luxury retailer, Saks. It needs to provide value from that relationship and be positioned as available aspiration. Everyone wants a younger customer, but expanding your base requires a respect to your core and an evolution not reinvention.

“What can you bring to the table?” is the question asked of any person — potential employee, mate, etc. — or business. The answer here was “a bunch of platitudes”(significant opportunity, celebrating the individual…) Saks is (was?) one of the most celebrated names in American retailing, but you’d never guess as much from this tepid effort.

I think the new branding strategy is definitely a strong move by Saks Off 5th. The newer assortment of mix and match costumes will attract many customers who like to experiment constantly. However I feel the target customers that the brand is trying to acquire might be harder than it seems. I wonder how it will cater to the new age consumers who don’t want to get associated with any brand label despite belonging to the high disposable income group. Unlike older days when the high-income category consumers increasingly wanted to get that higher level of sophistication in the store experience, the present-day rich customers don’t want that added sophistication. In fact, the excess sophistication of in-store experience hampers the quality of the interaction since customers don’t feel comfortable in engaging with the store staff. Moreover, they don’t want to be distinguishable from the rest of the society and specifically tagged by the label rich — something that’s not a part of their cultural values. So it would be interesting to see how Saks Off… Read more »
0
|
0
-   Share

Braintrust
"With only around 100 Off Fifth stores in the U.S. it is going to be difficult to really appeal and be a leader in the mid-tier space."

"Gen Z enjoys shopping in physical spaces. However will they have the patience to go through the treasure hunt experience at off-price stores?"

"A “rebrand” is not enough for these legacy brands. They need to focus on the lifestyle choices their next generation of shoppers if they want to engage them and stay relevant."