Can Bernie Sanders force Walmart to raise its minimum wage? 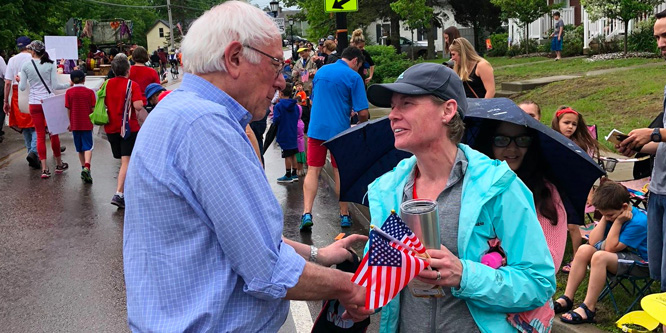 Senator Bernie Sanders (I – VT) and Rep. Ro Khanna (D – CA) have introduced legislation that would prevent companies with at least 500 employees from engaging in stock buybacks if they do not pay workers a minimum wage of at least $15 an hour.

The proposed bill, Stop Welfare for Any Large Monopoly Amassing Revenue from Taxpayers Act (aka the Stop Walmart Act), would also cap CEO compensation at no more than 150 times the median pay of all workers and provide a mechanism for employees to earn up to seven days paid sick leave.

The introduction of the legislation follows a similar public relations push by Sen. Sanders against Amazon.com. The e-tail giant recently increased its minimum hourly wage to $15.

The bill takes direct aim at Walmart’s $20 billion plan to reacquire company stock over the next two years. A study by the Roosevelt Institute, a liberal think tank, concluded that Walmart could raise the pay of its lowest wage workers by $5.66 an hour with half of the funds being used for the buyback.

“Walmart has refused to pay its workers a living wage, resulting in costs for taxpayers of $6.2 billion for basic necessities for survival, food stamps and housing assistance. If Walmart can find $20 billion for stock buybacks to further enrich the Waltons, it can find the money to raise the pay of its workers to a living wage,” said Rep. Khanna in a statement.

In January, Walmart announced it was increasing its minimum wage from $9 an hour to $11 while distributing one-off bonuses for workers of up to $1,000 following the 2017 passage of the Tax Cuts and Jobs Act.

A National Retail Federation analysis concluded that the average employee of a U.S. “C” corporation is being paid nearly $4,700 less per year based on the previous corporate tax rate of 35 percent. In his first state of the union address, President Trump said lowering the rate to 21 percent would help “increase average family income by more than $4,000.”

DISCUSSION QUESTIONS: Where do you stand on the benefits of stock buybacks versus other investments that retailers can make with available funds? What factors — political/public pressure, labor market competition, other concerns — are likely to be the biggest driver of wages and benefits for hourly workers at Walmart and other large retailers?

Please practice The RetailWire Golden Rule when submitting your comments.
Braintrust
"Rising tides raise all ships and retail is an industry that needs to evolve in this way."

"From a PR perspective, Walmart needs to get ahead of this bill and make it look like the company made the decision to do the right thing."

"Well, I seem to disagree with the majority here, but if a corporation gets a windfall in the form of a tax break, yes I do think the government has a say..."

14 Comments on "Can Bernie Sanders force Walmart to raise its minimum wage?"

It’s not the government’s place to legislate how companies invest their profits. While the drive to improve benefits and wages for hourly workers is laudable, ultimately labor market competition is the biggest driver of wages and benefits — with unemployment rates at historic lows, Walmart and other major retailers will need to (and many have) increase wages and benefits to retain and attract employees.

A classic case of the size of government and control. This isn’t just about Walmart, but the goliath companies competing globally. Where does the government control end? If you start with U.S. wages, what about the extremely low wages and working conditions abroad where many brands produce a majority of goods? Who will decide? What are the metrics? Will the benchmarks need to change if there is another global recession?

Retailers need to understand clearly that a wage of less than $15 per hour is absurd. Rising tides raise all ships and retail is an industry that needs to evolve in this way. If stock buybacks is the issue that makes it happen, so be it. Retail needs to be a reputable career choice again.

Retail needs to retain its workers. They represent the brand to the customer. There should be no political pressure or competition. They should act as Costco acts and pay a better wage, provide healthcare and retain their employees. How many more studies need to be done to prove this model lowers costs for retailers over the long term? A stock buyback is a short-term gain to keep the investment community happy. We have already seen that this “company first” approach has killed Sears and Toys “R” Us.

The hourly minimum wage is an ongoing argument and began years ago long before Bernie Sanders’ statements. There are those that feel that minimum wage jobs are entry-level positions to give people an opportunity to get into the working world while they begin their path of building their career. The problem with that position is today there are too many workers trapped in the minimum wage jobs for their entire career forced to work two and sometimes three jobs to make ends meet. There are others that believe businesses, one of which is retail can’t handle the increased wages and will either have to lay off employees, raise prices or go out of business. There is some truth to both arguments, but we do need to look at the whole picture. I have often felt that today executive salaries and bonuses are out of control. I am still appalled that the executives who were responsible for the failure of Toys “R” Us, who left early before the company closed its doors, received full pay and… Read more »
10
|
-1
-   Share

Bernie Sanders alone can’t do anything. That said, for too long, huge corporations have engaged in self-dealing, putting short-term share prices over the well-being of workers. There’s a persistent joke now that the unemployment rate is so low because everyone has two jobs. Let’s treat associates with more respect.

Well, I seem to disagree with the majority here, but if a corporation gets a windfall in the form of a tax break, yes I do think the government has a say in what they do with that windfall. Frankly, the U.S. taxpayer has been subsidizing Walmart through paying for things like SNAP for underpaid workers.

I say enough is enough. You can’t have it both ways. And no, I am not generally a Sanders fan.

This represents an unwarranted level of interference in corporate America. It is not the place of government to dictate to firms how they use their profits. If Bernie and his socialist gang feel so strongly they should go and set up their own companies and run them in accordance with their principles.

I’m persuaded by the arguments of those that posted before me. I believe that $15 as a minimum wage is affordable to most, if not all retailers. While they should be urged privately and publicly to do right by their employees, it should not be mandated by government. Unions were organized originally to achieve higher wages and better working conditions. While unions get shunned for various reasons, perhaps it’s time for them to step in and take the baton from Bernie Sanders and Ro Khanna.

I am not a fan of repatriated or tax break dollars being invested first in stock buy-backs. Just like I’m not a fan of tax dollars funding Amazon or football stadiums. Having said that, flipping burgers or washing dishes might not rise to the level of family-supporting jobs. I’ve done both, but it was a couple years ago. Have minimum wage keep pace with inflation. It sets a floor. The market, inefficient as it may be sometimes, will sort out the rest. Not every business is going to have the elasticity to handle minimums set too high. Will one worker at $15 an hour get it all done, or does the job require 1.5 people at $10 per hour?

Look, in the retail industry we are constantly talking about how to improve in-store customer service, yet companies like Walmart still aren’t paying employees a living wage. I can tell you that if I were on food stamps I wouldn’t exactly feel incentivized to perform.

Walmart suffers from negative brand perception and the fact that politicians have to fight to get the company to pay employees a living wage makes them look extra villainous. We’re always talking about how brands need to have strong corporate philanthropy to survive and Walmart is reaping a lot of negative press for this one.

From a PR perspective, Walmart needs to get ahead of this bill and make it look like the company made the decision to do the right thing.

I’m reluctantly joining this conversation as politics is a dangerous topic. I see both sides of the coin. If the government raises the minimum wage, that impacts everyone and every company. When the government points a specific companies and demands them to raise wages, that’s another story. If the government manages the economy properly, the demand for good employees will increase, as will their wages (to get and retain good employees).

“Other” investments? Are buybacks an investment? They may or not make sense, but it seems a stretch to call them that.

But back on point, for those who feel there should be some intervention in labor markets thru a minimum wage — and I would put myself amongst them (because I feel the last few decades have shown an uncoupling between [national] income and wages) — the best approach, methinks, is a constant and gradual increase in that minimum … something which IIRC we had for decades. Legislation targeting specific firms — and we can tell that’s what this is by the labor that went into contriving the acronym — is ultimately counterproductive.

Braintrust
"Rising tides raise all ships and retail is an industry that needs to evolve in this way."

"From a PR perspective, Walmart needs to get ahead of this bill and make it look like the company made the decision to do the right thing."

"Well, I seem to disagree with the majority here, but if a corporation gets a windfall in the form of a tax break, yes I do think the government has a say..."