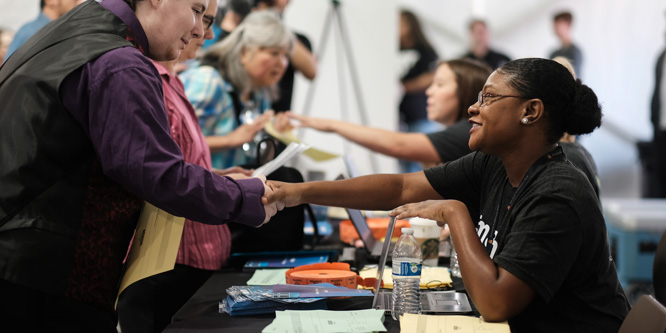 Amazon.com announced this morning that it is raising its minimum wage to $15 an hour for all workers, with those who are currently being paid that rate getting a boost, as well. In all, Amazon said 250,000 workers will benefit as a result of its pay hike including 100,000 people being hired to work at the company’s facilities for the Christmas season.

“We listened to our critics, thought hard about what we wanted to do, and decided we want to lead,” said Jeff Bezos, Amazon founder and CEO, in a statement. “We’re excited about this change and encourage our competitors and other large employers to join us.”

Amazon’s move comes at a time of intense pressure for retailers and others to fill open positions. New research by Korn Ferry found that roughly two-thirds of retailers plan to hire as many or more seasonal workers for the holidays as they did last year, when 23 percent fell short of their hiring goals. With the national unemployment rate at 3.9 percent, retailers are offering more hours to current employees and in some cases attempting to attract new workers with higher wages and benefit perks.

“I guarantee you this issue has gotten bigger and bigger,” Craig Rowley, senior partner at Korn Ferry, told CNBC. “There are more jobs out there than there are people looking for them. … It’s a hustle to find the talent.”

For its part, Amazon promised to step up lobbying efforts to get Congress to pass legislation raising the national minimum wage.

“The current rate of $7.25 was set nearly a decade ago,” said Jay Carney, senior vice president of Amazon global corporate affairs. “We intend to advocate for a minimum wage increase that will have a profound impact on the lives of tens of millions of people and families across this country.”

DISCUSSION QUESTIONS: What do you think will be the impact of Amazon’s decision to raise its minimum wage to $15 for its own competitive position and other retailers in the market?

Please practice The RetailWire Golden Rule when submitting your comments.
Braintrust
"Many other retailers are not in such a fortunate position, but they will still need to review wages and benefits if they want to fill their vacant roles."

"As a general rule, warehouse workers have longer tenure and higher pay than in-store employees."

"Retailers should reexamine their compensation and bonus incentive plans for their front line workers."

First, I want to commend Amazon for taking leadership on this issue. In terms of impact on other retailers, not much will change. Retailers have been and continue to struggle to find and hire people — the latest move by Amazon doesn’t change this much. Furthermore, the vast majority of the Amazon employees who will now make $15 are warehouse/product fulfillment employees which have a slightly different skill set/work environment than most typical retailers.

If this was Target or Macy’s that would be one thing. But these are by and large warehouse workers, essentially drones in the big machine pushing merchandise from one place to another. I would not expect it to have much effect on other retailers.

This is both a political and economic move by Amazon. It’s political as it will take some, but not all, of the heat out of criticism around its labor practices. However, it it also a recognition that the labor market is much tougher and tighter and that to get good people retailers have to pay more.

For Amazon, these costs can be offset by strong growth and improving profits. The market is also more relaxed about Amazon’s bottom line performance so the company has breathing space. Many other retailers are not in such a fortunate position, but they will still need to review wages and benefits if they want to fill their vacant roles.

I’m a little confused. Does anyone have any actual statistics on how much warehouse/DC workers typically make? I am pretty sure Amazon was lagging in that number. As a general rule, warehouse workers have longer tenure and higher pay than in-store employees.

So, so far it’s a yawn. Working in a DC is very different from working in a store. I think stores are generally a more pleasant atmosphere. And I think we’re comparing apples and oranges.

Yep, apples to oranges and my 2 cents.

This is certainly a commendable economic, and politically correct move by Jeff Bezos and the Amazon team, as the cost of living expenses have risen exponentially, while the minimum wage standards have failed to even keep up with the increases. I am in complete agreement with the panel that the majority of Amazon’s workforce is predominantly in their fulfillment distribution centers, and not customer-facing in a more traditional retail storefront setting.

If there are any positive downstream retail industry impacts, it would be on the supply chain distribution center side of the house. Yet it’s the retail store where all the critical interactions are taking place between the customer and the retail brand. The store associates or brand ambassadors are your most valued employees, as they are representing the brand and driving that critical customer experience. Retailers should reexamine their compensation and bonus incentive plans for their front line workers.

Not a competitive play for Amazon — but a PR and reputation play to address allegations of poor working conditions in the warehouse. Amazon just settled a class-action worker lawsuit, has continued problems with overtime pay (not paying them) and lack of breaks and issues with proper payments to their contractor driver fleet For Amazon, the announcement doesn’t move the needle that much anyway — per Glassdoor, the average Amazon warehouse worker made around $13/hour. The announcement does seem magnanimous and matches pay for other retailers, but this is all PR, not competitive disruption. The pay increases won’t get Amazon (especially flex) workers off of food stamps, won’t give them regular hours and won’t provide other key (costly) benefits like health insurance.

For certain, every human who wants to work has plenty of opportunities, and no excuses anymore for self-inflicted unemployment. There is a shortage of “workers” throughout the U.S. which means there will be indeed, competition for available human resources. Retailers will do whatever they “need” to do to be open and operate profitably now, through the holiday season. If certain retailers need to raise wages, or provide other advantages or benefits, temporarily or otherwise, I think they will do so.

It is not all about the money, but money makes a difference. Will this be a game changer for retail hiring? NO. Amazon does not have any retail employees. It has warehouse and distribution employees. Most people who work in retail would or do not like the idea of working in a distribution center.

Amazon is running ads here daily for help, so to throwing this on top of their “instant job” factor will be major in this tight labor market. A great preemptive move and a nice little “OK, how ’bout this” to Bernie and company. Bravo.

Once again Amazon sets the bar. Specifically for part timers, this will set a higher bar for other retailers. Also with Amazon’s past reputation for how they treat employees, this will help put them back in favor. I applaud Amazon for working to turn their tainted employment reputation around. This is definitely good for employees and Amazon. As for other retailers, the jobs at Amazon are not the same as being on the retail floor. Yet this is part-time work. People who want to make extra money will look for the best financial opportunities. $15/hour is a good opportunity.

It’s a competitive labor market, and this will definitely cause other retailers to review their wage plan and strategy for not just the holiday season, but beyond. Naturally, there will be questions to workplace health with reports of the conditions within Amazon’s distribution centers, but with the financial pressures many Americans face, these may be afterthoughts.

Amazon’s decision to raise wages to $15 will enhance its position on attracting better talent and retaining it, and it will force other retailers to adjust their wage levels. This is past due and waiting for the government to act to adjust the federal minimum wage is crazy. Our country should always have a livable wage for its minimum wage and our current level which is less than $8 is an international embarrassment. Soon Amazon will do the same with health care, and this will attract the attention of other large companies who are also competing for the same workers, as well as that of the government. Go Amazon! Keep leading by example!

Braintrust
"Many other retailers are not in such a fortunate position, but they will still need to review wages and benefits if they want to fill their vacant roles."

"As a general rule, warehouse workers have longer tenure and higher pay than in-store employees."

"Retailers should reexamine their compensation and bonus incentive plans for their front line workers."