Can Walmart hold onto the new, wealthier customers it is picking up? 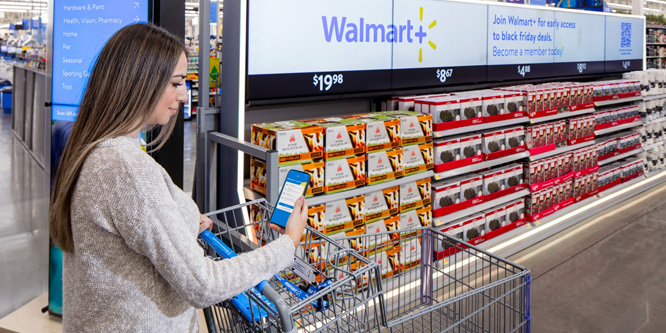 Walmart’s savings message is resonating with Americans across income levels and helping the company dramatically reduce its inventory in the process.

The retailing giant’s U.S. business reported an 8.2 percent year-over-year jump in sales during the third quarter as the retailer rang up increases in both average ticket and transaction size. Shopper visits to the retailer’s stores increased 2.1 percent. E-commerce sales were up 16 percent.

Walmart CEO Doug McMillon said that a combination of the right products inside and outside of grocery, value prices and the retailer’s broad suite of  shopping and fulfillment options will enable it to hold onto new customers it has acquired in 2022.

John Furner, president and CEO of Walmart U.S., said the chain is seeing an increase in digital engagement with its customers. Walmart app downloads have continued to grow, as has the number of users. Shopping frequency has picked up.

“For a long time, we talked about the value of a store customer plus shopping on e-com, how much more valuable that was,” said Mr. Furner. “We see that accelerate when it’s pickup, e-commerce and stores. So, you know, going forward, you’re going to hear from us talk about this more and more as an omni offer, which is really flexible for the customer.”

Walmart reported it has made significant progress reducing its inventory levels.

Mr. Furner said the chain cut its inventory from just above 26 percent in the second quarter to 12.4 percent at the end of the third. He said that most of that inventory is now in stores, with about three quarters of its dollar value tied to inflation. The net, he said, is that Walmart has seen some “pretty significant improvements in in-stock over last year.”

DISCUSSION QUESTIONS: How likely is it that the new customers coming to Walmart for groceries will stick with the chain once inflation becomes less of a factor? Has the chain made big enough improvements in categories such as apparel and home to build on the new grocery customers it has picked up?

Please practice The RetailWire Golden Rule when submitting your comments.
Braintrust
"Price may have driven upscale customers to Walmart. Keeping them will be up to Walmart."

"Great prices are a draw but if it takes too long to get out of the store, customers will look elsewhere."

"Some new wealthier customers will continue to shop in Walmart after inflation subsides, but they won’t tell anyone."

22 Comments on "Can Walmart hold onto the new, wealthier customers it is picking up?"

Walmart is perfectly positioned for the current market environment, and their results reflect this. Only time will tell if Walmart can retain the new customers that they are attracting, but the first step is to get these new consumers in the door and Walmart is certainly doing that. There’s no doubt that some of these new customers will remain Walmart customers in the future.

Most of the new higher income shoppers are there for food and essentials, they have not come across to buy general merchandise. My view is that Walmart has not done anywhere near enough to bolster trade across its non-food categories. In food, wealthier shoppers will stick around for as long as inflation remains an issue. Thereafter, some will keep shopping at Walmart for essentials and everyday products; however we will likely see more of a migration of spend back to other retailers on special and indulgent categories. A lot, of course, depends on how Walmart continues to evolve its proportion.

Neil you are correct. I have seen Walmart stores in higher end areas try to change the assortment in some food and non-food categories with very little success. From past experience, I believe it confuses the target Walmart shopper and the last thing retail needs right now is to lose the shopper to other options.

As a customer I value speedy checkout, but I don’t find it at Walmart. Great prices are a draw but if it takes too long to get out of the store, customers will look elsewhere.

Yes. Regardless of demographic this is still an issue.

I was in Bentonville last week and it’s amazing how that area has become so much more upscale! The restaurants, bars, and hotels are so much better than they used to be. In fact, I paid $22 for an Old Fashioned, more than I have ever paid for a drink, and I live in Manhattan! The new neighborhood markets in and around Bentonville/Rogers are better than ever and many Walmarts are also better, so will they keep the new customers they are gaining? I think if they keep improving the shoppability of their stores, and inflation does not subside, they will — at least in the Bentonville area.

Walmart will retain new customers, median to higher income, as long as inflation cuts into everyone’s pocket books. I believe inflation will be with us all the way through 2023. During this time, Walmart has a wonderful opportunity to surprise and delight these new customers with other general merchandise in the store, especially with their new fashion partnerships that are coming to life.

The higher income customer will shop Walmart only for as long as necessary and only for limited categories such as food and other essentials. There is also the question of geographic location. The nearest Walmart to us is 11.5 miles. I would only travel that far to go to Costco, which is across the street from Walmart.

Convenience is key (with a value chaser). I can’t tell you how many higher-income folks I’ve spoken to who have converted to buying groceries at Walmart (and signed up for Walmart+). Most are amazed by the time-saving delivery and pickup options. More non-grocery items are finding their way into those bags now that Walmart has made cross-category convenience a top priority. The downside is that retailers, with Walmart leading the crowd, have arguably made grocery shopping too convenient both online and in stores. Browsing in either channel has been severely curtailed, diluting the traffic-driving advantage that grocery was supposed to provide.

“Most are amazed by the time-saving delivery and pickup options.” Yes, the WOW factor.

A retailer’s lifeblood is attracting new customers. Walmart is benefiting from its sharp pricing in inflationary times in non-discretionary categories. Get them in the store, and over time these new customers will discover values in other categories to buy. The longer we have inflation, the more likely Walmart will maintain a significant portion of this incremental market share.

Price may have driven upscale customers to Walmart. Keeping them will be up to Walmart. The statistics suggest that much of the new customer base is upscale. For them, it may even be a “wow, I didn’t know that” experience. If they are satisfied, they will continue to return. The more frequent their visits, the more they will discover at Walmart.

I believe Walmart will hold onto the new wealthier customers for the following reasons: 1. It recognizes that omni-channel is about customers not channels and has invested in online ordering, in-store look and appropriate brands to capture wealthier customers. 2. Inflation has highlighted that some customers need to save when grocery shopping but everyone (including those who are more wealthy) likes to save money. Walmart allows both groups to meet their shopping/saving goals.

Of course. Shopping is a habit, and the fact that more affluent shoppers are returning now indicates Walmart will retain a large portion of them once fears of recession and/or inflation pass. And I agree with Doug McMillon that the key is to have enough of the right items across the right number of categories. You don’t have to get everything right, just enough things.

Here is what I am hearing in reference to groceries in Walmart. The produce department is consistently good with variety and good prices. It is interesting that customers replied that they started to go back to Walmart as a result of other customers’ comments. Two other shoppers like the store so much that they now purchase double what they did before — with a smile. Sounds to me like Walmart is heading in the correct direction.

The men’s apparel department at Walmart is a sea of hoodies, sweatpants, flannel shirts, denim and work wear. That assortment is not going to create any queues with these new, more affluent customers. Sounds like an opportunity to, dare I say, beam in a Gap-like shop that adds a more everyday apparel equation.

My view is “absolutely.” Driving trial and consideration is key to exposing your business to new consumer groups. This opportunity to not only show value to the inflation-pressed consumer, but to also engage them with new shopping conveniences such as store pick-up and delivery, improved private brand products, the value of Walmart+ membership, and improvements in other categories is a great opportunity for the company. My advice: don’t bet against them!

Some new wealthier customers will continue to shop in Walmart after inflation subsides, but they won’t tell anyone.

Mr. Rainey’s claim is quite remarkable, and … well, I’ll just leave it there. People shop at particular stores for a variety of reasons; one of these, of course is price, so when (change in) price becomes all important it’s logical that those who emphasize this attribute will pick up share. But, just as the question implies, over time the other factors re-assert themselves. I don’t think this time will be any different: personally I find Walmart to be an unpleasant place to shop, and while I realize not everyone feels that way, or has the luxury of choice, I’m guessing most of these high-end customers feel the same way.

If Walmart is gaining new customers because of inflation (or any other issue), they need to capitalize on the opportunity to turn them into repeat customers. The article mentions a big base of customers with incomes over $100,000. Walmart has had success with the higher-income and affluent customers — long before any of the economic issues that currently plague us. I remember writing an article about the number of Mercedes, BMWs, and other high-end automobiles that were parked in front of a Walmart.

Walmart may like to take a look at how the discounters — Aldi and Lidl — kept hold of customers after the last downturn. Following the global financial crisis, Aldi and Lidl acquired many new customers and kept some — perhaps not all — by focusing on the things those customers wanted as economic conditions improved. This included things like more luxurious food items from an assortment perspective, but not necessarily to service areas such as omnichannel fulfillment.

Braintrust
"Price may have driven upscale customers to Walmart. Keeping them will be up to Walmart."

"Great prices are a draw but if it takes too long to get out of the store, customers will look elsewhere."

"Some new wealthier customers will continue to shop in Walmart after inflation subsides, but they won’t tell anyone."