Does Amazon have an edge in capturing America’s youth? 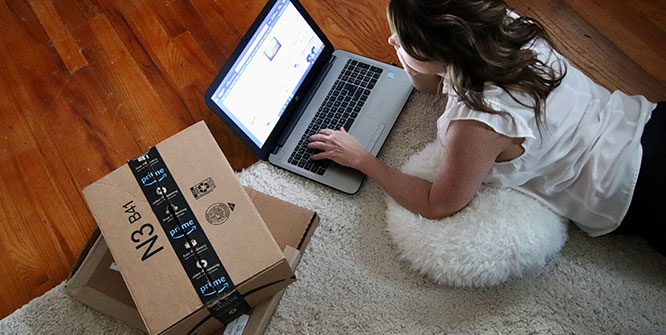 A dominant 53 percent of teens identified Amazon.com as their favorite e-commerce site, according to Piper Sandler’s “Spring 2022 Taking Stock With Teens” survey.

Preference for Amazon among teens in the survey has remained at slightly more than 50 percent for several years. Piper Sandler linked Amazon’s strength to Prime household adoption with the survey showing 86 percent of U.S. households had a Prime subscription.

“The category dominance in the teen segment is underappreciated, in our view,” wrote Piper Sandler in the study. “Prime adoption and the maturation of the teen cohort should serve as a powerful tailwind for many years to come.”

Nevertheless the evidence of Amazon’s popularity, both surveys underscored that younger generations are seeking to align their social values around sustainability amid concerns about online’s eco-impact from excessive packaging and the carbon footprint of online delivery.

A survey from Sitecore from last year found Gen Z respondents were the most likely among generations to feel guilty about making Amazon purchases (43 percent), followed by Millennials (37 percent), Gen X (34 percent) and Boomers (14 percent). The guilt was attributed to a desire to support other retailers.

DISCUSSION QUESTIONS: What’s driving the strong appeal of Amazon among younger consumers? Does Amazon have a massive advantage in connecting early with younger consumers to convert them into lifetime customers?

Please practice The RetailWire Golden Rule when submitting your comments.
Braintrust
"Amazon’s edge is a stranglehold. About 147 million people in the U.S. are members of Amazon Prime, which is about 60 percent of the adult population."

"Amazon even goes as far as to offer a student version of its Prime membership at a discounted rate to get students hooked once they leave the home."

"Amazon reflects youths’ values with its leadership in sustainability, diversity and a generous living wage."

21 Comments on "Does Amazon have an edge in capturing America’s youth?"

Amazon’s edge is a stranglehold. About 147 million people in the U.S. are members of Amazon Prime, which is about 60 percent of the adult population. The fact that younger consumers grew up (or are growing up) in households dominated by their parents saying “just get it on Amazon” and having weekly deliveries show up is a massive advantage for lifetime loyalty. The convenience factor alone is massive.

As the parent of two Gen Zers, I can attest that Amazon’s appeal is a combination of getting to use my Prime membership for free and the convenience of the breadth of the assortment. Between my college engineering son’s 3-D printing filament, motors, speed controllers, etc. and my high school daughter’s art supplies, makeup, and cosplay supplies, someone out there must think I’m building a hell of a robot, but in reality it’s just my kids getting Prime for free.

How will that change when they have to pay for it themselves? I don’t know that this is a slam dunk. My daughter buys new clothes only rarely – she’s all in on resale and vintage. She doesn’t trust Shein for quality and feels good about herself for buying resale – so while Gen Z’s use of Amazon today indicates powerful forces difficult to overcome, that guilt factor could definitely turn into something, especially when they’re facing their own membership fee to get that free shipping.

All this says that Amazon isn’t going anywhere for a while.

The biggest risk to Amazon is really its own moves and arrogance. Big companies tend to lose control a little bit at a time, and then all at once.

Overall though, Amazon has been a pretty good steward of its own brand with consumers — if not always with sellers.

Amazon has been there for this demographic during its formative years. It is easy to use. Gratification is rapid. It is no more expensive than most popular marketplaces. That’s it.

Amazon isn’t just an online retailer. Amazon is a part of our lives. The younger consumer grew up with Amazon, thanks to their parents, which is why Amazon doesn’t need to covert younger consumers to become lifetime customers. Amazon just needs to keep them. While there may be specialty retailers (certain brands or merchandise) for the day-to-day needs, Amazon gives consumers what they want.

Too often we try to discuss Amazon as a retailer. As you note, Shep, it is absolutely part of our lives.

Just like with older generations, for younger generations Amazon is the go-to place for ease and convenience. Amazon has almost become generic for online shopping. That is not just mindset but also reflected in words. “I’ll get it on Amazon,” meaning “I will get it online.” Amazon offers almost everything they want or need. Of my five teenage grandchildren, the four boys always start with Amazon and rarely need to go to another site. My granddaughter often shops the fashion sites noted in today’s discussion but, for her basic needs, her primary starting place is Amazon.

Does Amazon have a massive advantage? Shopping, as with most things we do, is habit. Once ingrained, they don’t change unless something makes them change. Your favorite supermarket is Pathmark. Then you move, and Stop & Shop is now the closest, so one is inclined to try it out. But Amazon is everywhere. There will be little in the future to change the Amazon shopping habit.

Clearly Amazon does have an edge amongst a generation that has grown up with online retailing. This is likely because their family pay for Prime so they get goods shipped free! It is interesting that they feel bad about the environmental impact of shopping online and the clothes they are buying but still say Amazon is their top choice. As they move on as a generation, Amazon will have to address this or risk losing these key customers. When the guilt outweighs the benefit they will stop buying.

While Shein is popular, teens need patience to wait more than a week for delivery. Nike and Lululemon have badge value yet higher prices than Amazon.

Amazon reflects youths’ values with its leadership in sustainability, diversity and a generous living wage. Aligning with younger consumers’ principles sets Amazon up to maximize their loyalty and lifetime value per customer.

Even Amazon’s detractors have admit that it’s a really easy site to navigate, checkout is very easy, shipping is fast and reliable, and it’s pretty easy to return items. I don’t love the idea that most of America defaults to Amazon, especially for long tail, harder to find items. But Amazon didn’t get to where they are overnight. I would love to see some credible competition come along and unseat them. And, who knows, retail is a fickle business. There may be a time when a generation of shoppers decides they don’t like the long list of issues you have to look past when you shop there.

But until someone else comes along and does it better/cleaner/more ethically, I think Amazon’s stranglehold on our commerce will continue unabated.

Amazon has been very strategic in targeting consumers of tomorrow. Not only have the younger generations seen the packages showing up at their parents’ doorsteps, but they’ve also been using Kindles and watching Prime Video for some time. This is a part of their everyday life. Also, Amazon even goes as far as to offer a student version of its Prime membership at a discounted rate to get students hooked once they leave the home.

This is all quite predictable as Amazon continues to dominate online shopping with, oh, about a 50 percent market share. In so many ways, this survey work seems merely to validate market share and not discover something surprising.

This one is easy — teens have been using their parents’ account since they were issued cell phones. They were able to make purchases for “essentials” and then expanded their purchases to school and clothing needs. This is especially true for college students. The behaviors have been established and that provides Amazon with a huge advantage. The key will be to have this generation extract themselves from their parents’ account/credit cards and create their own account.

I agree with Nikki Baird that their parent’s account is the gateway for Gen Z and Millennials’ experience with Amazon. The pandemic strengthened their dependency on Amazon for access to both replenishment items and items for office, projects, home basics and beauty brands they are already familiar with.

The jury is still out on apparel shopping.

For now, Amazon benefits from high levels of awareness, but irrelevance will catch up to them. Just happens. No one wants to be their parents, until they see a Progressive ad.

My two Gen Z teenagers consider Amazon their trusted go-to for 70% of online purchases. They love the consistent experience, speed and value. Target and several others make up the rest.

Biggest issue they’d like Amazon to fix is the packaging waste (excess sizing for the product, too many single item packages). They worry less about how big the company is or social issues.

Amazon will have their lifetime business unless something drastic happens.

All those branded boxes that arrive every week have an impact, and will leave their mark on young impressionable minds. We can’t help but like the familiar — it’s the way we’re wired. Will they see the Amazon brand more than all other brands, no. But possibly more that any other retailer.

I vote for Amazon to stay dominant. I just don’t see any disruptors to their leadership.

Younger consumers have not seen a world without eCommerce and smartphones. Furthermore, their Amazon buying experience is unmatched. Gen Z is digitally literate, well-equipped, and has a solid habit of shopping online. All of these aspects, combined with a service that totally meets Gen Z’s demands, are, in my opinion, what attracts them to Amazon. The brand specializes in providing great convenience while shopping online. They also understand how to keep customers loyal to the Amazon brand. So, unless another brand develops similar capabilities and has a distinct selling point on top of it, Amazon will have a significant advantage. And I don’t see this changing anytime soon.

Amazon’s edge with the youth is oversized, with Amazon Prime tying in cloud services, entertainment and shopping in Prime’s offering. The ease of use of the Amazon app is great given their head start. I think it is their strategy to be the best for the young and grow them as customers in the long term, and they are succeeding.

Braintrust
"Amazon’s edge is a stranglehold. About 147 million people in the U.S. are members of Amazon Prime, which is about 60 percent of the adult population."

"Amazon even goes as far as to offer a student version of its Prime membership at a discounted rate to get students hooked once they leave the home."

"Amazon reflects youths’ values with its leadership in sustainability, diversity and a generous living wage."