Dollar General plans to expand its selection of $1 items 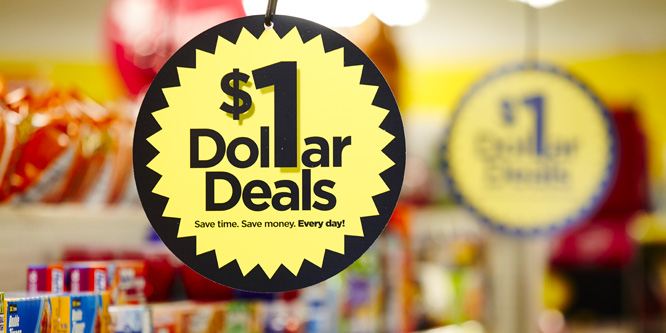 Dollar General says it is not abandoning the pricing on its selection of $1 products, even as inflation continues to drive retail prices up nationwide.

While not everything in Dollar General costs $1, around 20 percent of its inventory does and the chain recently said that it will never increase prices on that assortment, according to CSP Daily News. In fact, Dollar General intends to expand its $1 selection. The chain sees that price point as meeting the needs of a financially strapped customer who relies on dollar grocery options. The statement comes as Dollar General competitor Dollar Tree has raised its prices permanently to $1.25.

The Dollar Tree move, which was announced in late 2021, was criticized at the time by David D’Arrezo, former chief merchant at Dollar General, as “[destroying] 35 years of brand equity in one fell swoop,” CNN Business reported.

Another value store with a price point in its name also recently strayed away from its branding with a cost increase.

In 2019 Five Below, named for its selection of products priced exclusively below $5, began piloting a section of its store called Ten Below, dedicated to products in the below-$10 range. In 2021 the chain went further, rolling out a store-within-a-store unconstrained by price promises, called Five Beyond, in one-third of its stores nationwide.

Other retailers who know their customers are looking for particular deals have stuck to their knitting on price, though, despite inflation.

As of July, 2022, Costco had not increased the price on its iconic $1.50 hot dog and soda deal or its $4.99 rotisserie chicken, according to The Street. The hot dog and soda deal has remained the same price since the 1980s. The warehouse retailer did increase the prices of its chicken bake and its standalone fountain soda.

While Dollar General is aiming to hang on to its under-a-dollar value proposition in its mainline stores, the chain also has an entire store concept where it can charge more. In 2020, Dollar General began opening more upmarket stores under the popshelf banner. In popshelf stores, 95 percent of products are priced at $5 or below.

DISCUSSION QUESTIONS: How important is the $1 price point to Dollar General shoppers? Do you see major players in the dollar space following suit on $1 items?

Please practice The RetailWire Golden Rule when submitting your comments.
Braintrust
"It’s smart to drive value-based shoppers in and build up the impulse inventory and increase total cart value which is where Dollar General specializes."

Yes, price point is important when you have positioned your entire brand around it. But I seriously doubt that adjusting prices slightly in the face of the inflationary environment will cause shoppers to switch to other retailers. When the low-price discounters start getting into a price war, you know the market is tight.

Value retailers, either standalone or in sections within stores, are being shopped more due to current financial constraints. I think customers still look for a deal and this helps.

The $1 price point is eponymous. Dollar General shoppers expect it.

Value shoppers rely on consistently low price points for essentials; they resent the erosion of purchasing power. When prices ballooned at Canadian chain Dollarama, Twitter exploded with nicknames like FiveDollarama.

Rivals may no longer have the margins to match Dollar General’s $1 price point across their assortments.

Agree. They have to stick with how consumers see them, even (and especially) in the face of inflation. This is a moment where they demonstrate consistency.

Reinforcing its dollar commitment is important for DG, especially now. The retailer needs to show that it remains committed to this price point despite inflationary challenges.

I love this targeted approach to assortment planning that helps deliver on the brand promise and preserve their price/value perception. I will be interested to see if the selection of $1 items is the same chain-wide, or if it varies by location/region. Hearkening back to a somewhat contentious marketing vs. merchandising discussion here on RetailWire last week, this strategy epitomizes the role of merchandising as marketing: influencing brand perception through targeted assortments and pricing.

Dollar General can build its differentiation from Walmart with this kind of value play. It’s smart to drive value-based shoppers in and build up the impulse inventory and increase total cart value which is where Dollar General specializes.

$1 items at the dollar store. What a concept!

Dollar General built its customer base on its pricing strategy. It has continued to grow its customer count adding additional categories and holding to the magic of that price on a significant portion of the items it sells. It is who they are and vital to maintaining their position in the market.

Remember penny candy? One could actually buy candy for pennies. Those were the days.

Dollar General is stuck. Rather than expanding its $1 merchandise, it should be resetting its brand. Dollar General doesn’t have to stand for under a dollar; it could simply stand for saving dollars with all prices at various dollar price points. They should have addressed their strategy for price inflation a long time ago.

I’m pretty sure I’m not a typical Dollar Tree shopper. I love Dollar Tree. My daughter and I have been living in hotels while her apartment is turned into a wheelchair accessible apartment. (TMI) So I’ve been trying to help us minimize eating out. Mini fridges and microwaves help immensely. And all the supplies I needed came from Dollar Tree: sharp knives, microwavable bowls, real dishes, some cutlery (real and plastic), cleaning supplies and a wine glass for me. Everything was $1.25 and I thought it was a great value. I understand why their prices went up, but I see how their merchandising and inventory helps convince me it’s still a great place for value and quality (most of the time).

While not everything in Dollar General costs $1, around 20 percent of its inventory does and the chain recently said that it will never increase prices on that assortment. (Emphasis added.)

Never? That’s … hard to believe: even in a world of 2-3% inflation, a decade would mean a real price drop of a third; higher inflation, that much worse.

The brutal reality is, a store built on a fixed-price (limit) model is doomed to fail; the “five and ten cent stores” learned that and became “5, 10 and 25 cent stores” and, finally, accepted that the term was a (just) a figure of speech rather than a marketing promise.

Of course DG probably realizes this, since only a fraction of items are so priced; ultimately the question is “how much is symbolism worth?”

Braintrust
"It’s smart to drive value-based shoppers in and build up the impulse inventory and increase total cart value which is where Dollar General specializes."