Dollar stores — they have the meats 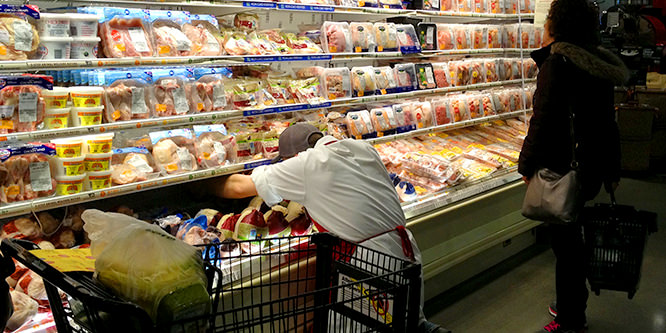 Where’s the beef? For a growing number of consumers, the answer is in dollar stores.

According to a survey by the Food Marketing Institute and the North American Institute, as reported by The Fiscal Times, the percentage of American consumers visiting dollar stores to purchase meat and poultry rose from three percent in 2014 to seven percent this year. The move to dollar stores was part of a rise in visits to alternative outlets among meat and poultry buyers, which included increases for farmers’ markets (15 percent to 18 percent), farm direct (three percent to five percent) and online (three percent to four percent).

Dollar stores are grabbing a greater share of retail purchases among a wide swath of budget conscious consumers. Research by NPD’s Checkout Tracking, for example, found that 29 percent of Millennials who shopped at Dollar General, Dollar Tree and Family Dollar were from households earning over $100,000 a year.

While alternative outlets have grabbed market share, supermarkets remain the channel of choice for most consumers in the category. The channel gained share from 2015 to this year, according to the survey, with 62 percent now listing grocery stores as their primary outlet for meat and poultry. Supercenters, which saw a share decline over the same period, are the second most popular source for meat and poultry purchases at 19 percent.

DISCUSSION QUESTIONS: Do you think dollar stores will continue to grab market share of the meat and poultry categories? What other shopping channels do you think have the most to worry about when it comes to the rise of dollar stores in this category?

Please practice The RetailWire Golden Rule when submitting your comments.
Braintrust
"I wouldn't lose sleep over this if I were a butcher or a supermarket operator."

12 Comments on "Dollar stores — they have the meats"

It doesn’t discern between cooked and raw. If raw is a new trend, all it will take is one outbreak to make people question the low prices. Just like the restaurant offering half-off off “fresh” sushi. A deal is a great deal until someone gets sick.

Dollar stores don’t have the infrastructure to handle raw products.

As someone in the custom meat arena, everybody is in the meat game, as talent for some no longer matters. Discount Drug Marts sold boneless center-cut pork loins in the bag plus sauerkraut for the last three New Year’s holidays. They threw them in a refrigerated bin and boom, they are in the meat business. One customer actually came into my store with two of them, wanting me to slice them for free. I politely told her no. With pre-packed and in many cases injected for extra shelf life meats, gas stations can sell meats today. So where is this all going? You can not stop the fact that it is easy to sell something bought in a box, but if you look at the prices per pound they are much higher. Folks see them in a Dollar General and immediately they think they are going to get a bargain based off their grocery prices. Many said “Retail ain’t for sissies” and it is absolutely true, and the poorer the area, the more these pre-packed… Read more »
4
|
0
-   Share

Buying raw meats and poultry are a largely a function of faith in the seller and the brand. The consumer has to believe that both have properly handled the product throughout the supply chain to prevent all the various bad things that can happen.

As Bob stated, it will only take one instance of someone getting ill and the investigation finding inadequate food safely procedures being followed for the consumer to lose that faith (at least for a while) and the trend to turn negative.

Depends on what kind of meat we are talking about here and which dollar store operators.

If it is packaged meat I can see the dollar channel’s share increasing gradually over time. If we are talking about fresh meat — forget it, unless you are talking about a food desert where customers lack mobility.

The same is true about operators. Could best-in-class operators sell fresh perishables? Sure, it happened in convenience stores. Could the average independent strip mall dollar store safely handle meat? Probably not given that some of them are challenged when it comes to handling helium balloons.

Bottom line — I wouldn’t lose sleep over this if I were a butcher or a supermarket operator.

It is one thing to purchase items at or just over the recommended buy date on dry goods products. Purchasing meat in dollar stores may seem like a convenience worth the gamble at first. If the meat is fine and no one gets sick, the gamble was successful and the behavior will continue and become habit. However, the publicity of someone getting sick is likely to break the habit. Staying on the “safe” side of the gamble will be a challenge for the dollar stores.

In the U.S., although the overall economy is showing signs of a slow recovery with housing, autos and other factors improving, there are still too many geographies that are stagnant. Also, too many people’s incomes are not growing, either. Therefore I expect this retail format to continue to grow overall, including specific categories like the meat department. These formats offer a great value for many shoppers while more and more people are demanding value, even if they can actually afford more expensive goods.

Much of the retail industry has mistaken the dollar store channel for the simple reason that they do not understand the shoppers in the core and secondary segments in the channel. Dollar General, Dollar Tree, Family Dollar and the West Coast chain of 99 Cents stores do. By understanding the consumers, dollar stores have effectively continuously tweaked their merchandising and store operations practices. 99 Cents Stores even has assertively stepped into the breach of expanding meat protein by hiring top-flight executive talent from grocery chain leaders. Geoffrey Covert, CEO, came out of 20 years at P&G and another 20 at Kroger. Jack Sinclair, chief merchandising officer, drove groceries and other departments at Walmart in some of their best years. Jim Parros, logistics, earned stripes at department stores and specialty stores, while Felicia Thornton, CFO, was an executive at Kroger and Albertsons. Food and better protein are both a necessity and of interest to all sides of the consumer marketplace. The dollar stores get that message. They walk their stores and other retailers, while too many… Read more »
1
|
0
-   Share

I do. Consumables now represent over 60 percent of the SKUs in dollar stores. Meat and poultry items are now additions. Remember, some people need to save money, but everyone loves to save money. In my research on Millennials, 38 percent indicated that they shopped in a dollar store within the past 30 days, making dollar stores the third most frequently shopped food alternative, behind supermarkets and supercenters.

Planet Retail expects the leading dollar stores to add 7,000 new outlets in the next five years, up from about 6,000 in the past five. Who else should be concerned? Walmart for one, who refers to dollar stores as “ankle biters.” Dollar stores have demonstrated that they can come into an area whose traditional food retailers were displaced by the arrival of Walmart Supercenters and thrive in this “scorched earth” environment. Another format subject to the impact of dollar stores is the convenience store, particularly those c-stores which have not gravitated toward foodservice. Dollar stores are perceived as convenience stores without convenience store prices.

I think what we’re seeing is a convergence in basic retail. Consumers would rather make one stop than two, and that’s the driving force behind many trends including supercenters, grocery stores adding prepared foods and now dollar stores getting meats.

Dollar stores are uniquely positioned to gain shoppers in this convergence, as their reputation as having the best prices will be all important if shopper budgets keep contracting.

The dollar store’s market has been established based on low margins and lower pricing. When it comes to meats and perishables, I would rather spend the extra money and buy from a grocer I have confidence is selling a reputable product. Period. End of story!

First, make no mistake, competition is everywhere. C-stores carry meat, Target carries meat and you can even order meat sight-unseen from multiple online providers. So why not dollar stores?

Second, I believe that the meat and poultry categories within dollar stores will continue to rise. Keeping in mind that this is largely prepackaged meat that has been treated for longer shelf life and does not compare to the quality offered by a butcher slicing the ideal cut. That said, for most, good enough is good enough.

Finally, should supermarkets be worried? Competition is always worrisome if you have absolutely no notable difference. For the moment, the differences should be apparent and supermarkets and specialty shops will continue to capture their fair share.

No doubt about it, the dollar stores will grab more of the entire food segment. It is all about convenience and price. Since the consumer is already in the store and they see something of value that they can use, why would they not buy it.?

Braintrust
"I wouldn't lose sleep over this if I were a butcher or a supermarket operator."