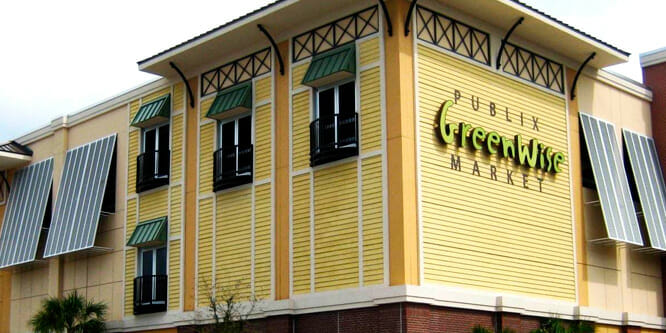 Regional grocer Publix is one of the most highly-rated grocery stores among consumers. But as the chain expands its organic/natural concept, GreenWise Market, it will no longer count on customers recognizing the Publix name to get them in the door.

Publix launched its line of branded GreenWise organic and natural products in 2003 and opened its first full GreenWise Market store in 2007. But as of early 2017 the chain had only opened three of the stores. Last year, Publix announced an impending expansion of GreenWise Market that would utilize insights gathered from running the existing stores, customer feedback and an understanding of market trends to better actualize its vision for the business.

Depending on how far it expands, GreenWise Market would end up competing with other regional organic and natural chains like Sprouts Fresh Market and Fresh Thyme, as well as the biggest name in the space, Whole Foods.

And at present there’s a lot up in the air about Whole Foods. The chain’s acquisition by Amazon.com has led to speculation about its future. Will the chain’s operations be woven into Amazon’s broader e-commerce ecosystem? Will it eventually roll out the cashier-less checkout technology currently live in Amazon Go?

There are also signs that Amazon may be leading Whole Foods away from its core organic shopper. Amazon has caused controversy within Whole Foods by discussing stocking products like Coca-Cola to improve the chain’s profitability, according to Yahoo Finance.

DISCUSSION QUESTIONS: Is it a good move for Publix to separate GreenWise Market from its main concept? What advantages could such a strategy offer as the chain pursues expansion? Do you see other mainstream grocers such as Kroger opening similar concepts as sales of organics continue to grow?

Please practice The RetailWire Golden Rule when submitting your comments.
Braintrust
"While I understand the need for some separation in terms of branding, the strength of the Publix name can only be beneficial to GreenWise."

"This expansion plan is on such a slow roll that I believe GreenWise Market would benefit from use of the strong Publix brand halo."

"GreenWise deserves to establish its own identity in a market that wants purity and simplicity."

While marketing purists might wish for a clean break from the Publix brand in order to enable GreenWise to establish its own identity, I would proceed with caution. Earning mind share is so challenging in this environment, where consumers are bombarded with a relentless stream of marketing “noise” 24 hours a day. Given that Publix has a well-established brand with largely favorable equity, I am not convinced walking away from Publix’s name recognition and goodwill is a winning strategy. Especially as GreenWise market is the relative newcomer in a rapidly growing market.

Blended branding has its place but the brand confusion that GreenWise and Publix could generate among consumers has a lot of downside. GreenWise deserves to establish its own identity in a market that wants purity and simplicity. Publix can stand on its own from a brand building perspective.

I don’t think it’s a good move to separate the Publix name from the GreenWise Market. Here’s why: Publix is very good at promoting its private label product. In this way, the main Publix stores could act as “feeder stores” for the Greenwise markets. On its own, no one knows what Greenwise is, or even why it matters. Which brings me to my second point: The Greenwise packaging is very, very generic looking. That’s not bad, since it’s a private label brand and easily distinguishable from national brands, but it’s very uninspiring in subtle ways. For example, Publix sells Greeenwise organic half and half. I suppose it’s as good as Organic Valley’s organic half and half,but Organic Valley has killer packaging that just begs you to buy it. Everything about the packaging says “Our cows are well-cared for, pasture-raised, without antibiotics and it’s as healthy as all get-out.” Food is emotional. There’s nothing emotional about the Greenwise brand or packaging. Tied to Publix, the brand gets some of THAT brand’s cache. It is, after all,… Read more »
6
|
0
-   Share

While I understand the need for some separation in terms of branding, the strength of the Publix name can only be beneficial to GreenWise. As such, I am not sure what is accomplished by removing it. The only things I can think of is that it has caused some customer confusion, or that Publix wants to create another strong but distinct brand as a vehicle for future growth and to add further asset value to the business.

It seems every day we are learning about another new food concept, new chain or new products. That said, the food industry is increasing rapidly. We already have seen success with organic chains like Food Thyme and Earth Fare, so it’s no doubt other food chains will follow. Today there are so many different types of food selections making it nearly impossible to fit them all under one roof so offering different brands that cater to different audiences is smart. Not identifying Publix with GreenWise Market doesn’t make sense to me because Publix is a hugely successful grocer, recently voted the number one grocer in the country. They have a lot more positives than negatives about their company, so I would see benefits letting customers know that GreenWise Market is another one of their brands. But the public will find out anyway so keeping it a secret does nothing to help them.

GreenWise is currently able to borrow brand equity by incorporating the Publix name. Consumers know and understand what Publix stands for. This gives GreenWise an immediate acceptance in the marketplace that it would otherwise have to develop over time.

I agree with Dave that it is too soon for GreenWise to be expected to have the same degree of acceptance without the Publix name. Perhaps over time Publix could reduce its name being associated with GreenWise but no, it is not the time for complete separation.

The Publix reputation is so strong (which as a shopper I don’t totally get) that as the GreenWise concept is expanding, I believe that they should leverage both names to ensure credibility. If GreenWise gains footing in the markets it serves, who’s to say the Publix name shouldn’t be dropped down the line? This is more common practice in acquisitions vs. organic concepts but, in this case, could be a good strategy.

This expansion plan is on such a slow roll that I believe GreenWise Market would benefit from use of the strong Publix brand halo. It adds credibility.

I know all the arguments to the contrary, but I think this is probably a good move. Why? Well, because a brand is a promise and all the artifacts of that promise — goods and services — need to reflect its authenticity. If you are selling food that foodies at least see as, “bad,” because it is processed, has too much salt, sugar, fat, contains GMOs or whatever in one banner and the other banner is supposed to stand in opposition to all those things, it won’t be too long before an activist or two, or a bored reporter, or whoever, calls you to account. The collision is almost inevitable. Whether or not separating the brands gets you out of this dilemma remains to be seen. There’s always the possibility of being attacked for retail hypocrisy when you are selling Twinkees under one banner and tofu in another. Some activists might even attack Publix for trying to “conceal” its ownership. As, I said, we’ll see. But separate branding allows Publix to make two strong brand… Read more »
1
|
0
-   Share

I think this is a bold and terrific move. This returns Publix to its original plan & target market, namely organic and natural foods consumers. The shortcomings of the original Publix moniker was that customers were looking for non organic and non natural foods products typically carried in the larger regular format Publix stores. Too much under one umbrella, namely Publix, causes consumer confusion as to what the banners represent. This refocused approach permits GreenWise to concentrate its focus and resources to its originally intended mission.

Shoppers are generally pretty knowledgeable about where they shop, particularly in this day and age where a company’s whole DNA is readily available online (at least for those who are interested). So while co-branding has a certain logic — to preserve an existing nameplate after a merger or serve as a point of differentiation for a new concept (the situation here) — in this case, I don’t think it’s going to matter what’s outside … as long as it’s what people expect of Publix inside.

The move is probably much better for Publix; but I wonder if GreenWise can survive without the Publix name. Sure, they are known to be connected in Florida and especially Lakeland. That is Publix home state and home city. But outside of there, it could be a problem.

While I can see the desire to create a brand that can stand on its own and create its own brand equity with customers, it’s hard to believe the Publix brand would somehow hurt the GreenWise branding overall. Publix has such a recognizable name, with great brand equity and goodwill it’s tough to understand the logic behind this move. The idea behind a GreenWise store makes sense and latches on to a consumer trend for organic and natural products, but why not leverage the existing brand to help grow its customer base?

Braintrust
"While I understand the need for some separation in terms of branding, the strength of the Publix name can only be beneficial to GreenWise."

"This expansion plan is on such a slow roll that I believe GreenWise Market would benefit from use of the strong Publix brand halo."

"GreenWise deserves to establish its own identity in a market that wants purity and simplicity."