Have robo-pharmacies become a must-have for Walgreens and other drugstores? 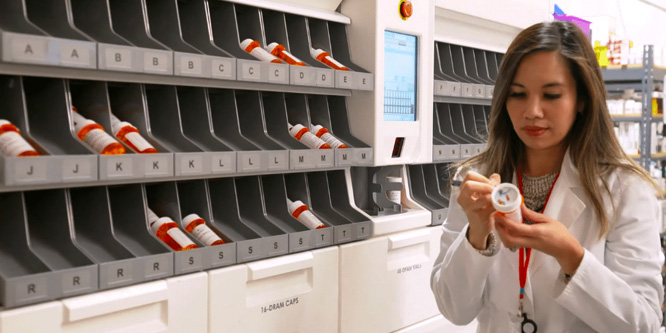 Walgreens will use robots to fill customers’ prescriptions in 22 micro-fulfillment centers the chain is opening in the next three years across the U.S.

Walgreens will use its pharmacists to fill medications that are time-sensitive as well as those classified as controlled substances. The goal is to free pharmacists up to spend more time engaging with customers.

“It’s kind of dreary to be filling scripts all day long,” Rick Fernandez, a regional health care director for Walgreens, told CNBC. “What we were hearing was pharmacy was more of an asset that people gave us credit for.”

A shortage of pharmacists has placed added pressure on drugstores that have had to compete for talent. The pandemic and the introduction of vaccines has expanded the role of pharmacists involved in administering shots and tests.

The use of robots in pharmacy operations is not new; mail-order fulfillment has been automated for years. Walgreens doesn’t immediately plan to fill mail order prescriptions using the robotic system but expects that will be part of its service going forward.

Walgreens is not alone in the use of the technology — rivals CVS and Rite Aid also use robots to help fill prescriptions.

NowRx, which has eight locations in Arizona and California, fills scripts in under 30 seconds with dispensing robots. The service, which launched in 2016, plans to expand into the Bellevue, WA, Denver and Las Vegas markets before moving into other states, CEO Cary Breese told The Mercury News.

DISCUSSION QUESTIONS: What impact will widespread use of robotics have on retail pharmacy operations in the U.S.? How will this affect the role of pharmacists?

Please practice The RetailWire Golden Rule when submitting your comments.
Braintrust
"Walgreens' decision to free up pharmacists to spend more time with customers is a smart and needed move. If robots can help with that then I am all for it."

"We should expect robotics and automation to become the standard operating models for any repeatable tasks."

"Whether Walgreens uses it as a means to reduce the number of pharmacists in-store is still to be seen."

17 Comments on "Have robo-pharmacies become a must-have for Walgreens and other drugstores?"

There’s little doubt that the widespread use of robotics to fill prescriptions will become the norm. Counting pills is tantamount to counting inventory – automation and robotics can do this more effectively and cost effectively than humans. The upside is that pharmacists will get to focus on patient care, and that will be tremendously more valuable to patients.

Filling prescriptions is a great use case for robotics. Robots can fill prescriptions eight times faster than pharmacists and it relieves the burden of monotonous tasks from pharmacy staff. With the shortage of pharmacists and the cost of labor, robots are a perfect solution. Now pharmacists can spend more time doing more fulfilling activities like building relationships with patients and interacting the way they were trained.

This is a smart use of technology that cuts down on intensive manual costs and frees pharmacists to spend quality time with patients and customers. Hopefully it will also eliminate some of the long lines that can develop at certain times when the pharmacists struggle to keep up with demand.

Robotics to physically fill a prescription is a logical extension of using hand-held devices to count other inventory, in other stores. As long as the building of the script continues to be done by degreed, licensed pharmacists to avoid contraindicated prescriptions or abuse, the mechanical execution of counting, bottlling and labeling a prescription can and should be automated. Pharmacists are scarce and paid too much to have to spend time on these menial tasks.

Pharmacists are the new doctors, at least when it comes to better explaining what medications do, side effects, and interactions with other meds that may have been prescribed by multiple doctors.

After losing my father when he was given a medication that ended his life, I rely heavily on pharmacists. I feel they have a better handle on medication uses, FDA black box warnings, etc. Walgreens’ decision to free up pharmacists to spend more time with customers is a smart and needed move. If robots can help with that then I am all for it.

I guess I am old-fashioned. I prefer to talk and work with pharmacists that are humans and know me. The mistakes I see Walgreens making (and there are many!) have less to do with their technicians’ and pharmacists’ ability to count, as with the company’s inability to recognize that the pharmacy is completely understaffed and its inability to follow basic mask mandates. I get duplicate prescriptions, I wait 90 minutes for someone to answer the phone (I have checked, this is a nationwide problem) and there is no doubt the people working in the pharmacy are underpaid and have poor morale. The company has been completely focused on expense management ever since the merger with Boots, and that’s what I see this as – another attempt to reduce expenses. Anyone who thinks this initiative will result in pharmacists spending more time with guests is missing the point – expense reduction. I promise, they’ll just take another body out of the pharmacy area. Back in the day, maybe mid-’00s, someone was pitching me on pharmacy vending… Read more »
3
|
0
-   Share

Robots in collaboration with pharmacists can offer the best of both worlds: efficiency and expertise. As long as robotics protect safety with accurate prescription filling, they add value through productivity. Pharmacists free up time to provide the human touch of personalized consultations for customers.

Brilliant, and about time. Generally, when picking up prescriptions, if there are any questions a pharmaceutical assistant will try to answer them as best as possible before requesting the pharmacist to help out. That can, and does, create log jams for the waiting customers. My take on this: There is no downside with the effective use of the robots. I believe customers will be much better supported in reality and in their minds. That adds up to good service perceptions, and that is good for the retailer. Now everyone is happy.

This is a sound strategy for Walgreens. Retail and other consumer-facing companies can no longer ignore the opportunities that technology makes possible. They need to reimagine their old processes but be willing to leap beyond incrementalism.

The pharmacist has been the heart of the prescription business. Watch your local pharmacist for a few minutes. You’ll see them multi-tasking: interacting with a computer application, retrieving medicine, counting, printing labels, answering customer questions on the phone, talking to doctors, providing drug consultations, and more. Walgreens has identified the value-added activities that elevate the pharmacist’s work with a renewed focus on the customer. The company can grow its pharmacy count without a commensurate increase in total labor cost.

I join the majority of my colleagues in praising this initiative. Consider pharmacists are required to have a doctoral degree and pass multiple exams before becoming licensed. Counting pills is a poor use of their education.

This is a brilliant strategy by the Walgreens team. Leveraging robotics to fill prescriptions will drive a more efficient process and reduce the cost to serve. It will free up the professional pharmacist to meet customers’ needs. With the renewed emphasis on health, wellness, and overall lifestyle needs, a freed-up pharmacist will be able to guide and advise customers rather than fill prescriptions.

We should expect robotics and automation to become the standard operating models for any repeatable tasks. Micro-fulfillment is another strategy pharmacies, grocery stores, and DTC companies could leverage. This is only the beginning of this movement, and it will reap benefits for Walgreens and prioritize the customer experience.

I don’t doubt the growing role of robotics in filling prescriptions — if anything, it may make the process less subject to human error. But I am skeptical about Walgreens’ motivation. Is it really about letting the pharmacy team spend more time advising customers, or is it about reducing the size of the team?

Walgreens had well-reported problems during the recent Omicron surge keeping up with demand for Covid tests, and in many stores its staff shortages led to long lines, closed drive-thru lanes and even fulfillment delays. Let’s hope this new strategy truly leads to improved customer care.

Automation will lower pharmacy costs and allow pharmacists to be used for higher level functions- including testing, face-to-face engagements, and consultation. The demand for pharmacists may shift a bit, but many pharmacies are already understaffed.

The Parata Max device by McKesson was found to have great results, but the employee structure and workflow suffered from more workflow interruptions, changes in scripts and need for more techs than pharmacists (based on a 2011 NIH study in JAPA).

Routine tasks are ripe for automation as long as there is still the necessary human interaction is easily available when needed. And given the shift to retail as primary healthcare providers, it’s a good way to allow chains to focus efforts and people on other services.

Pharmacy is all about accuracy — or perhaps I should say, accuracy first and foremost — so the first question I would ask is “does this do as well (or better) on that than existing procedures?” And it very well may, of course; the challenge will be to avoid just looking at the cost side — or really any one facet — and ignoring others.

Performing repetitive, precise tasks is what robots are good for. Given the advances in visual, weight and other sensing technologies, the accuracy rate should be high enough to match human filling. Whether Walgreens uses it as a means to reduce the number of pharmacists in-store is still to be seen.

Undoubtedly robotics will have numerous benefits on retail pharmacy operations. Leveraging robotics will be a win-win situation for both retailers and customers. Speaking of employees in retail pharmacy, they are highly qualified and their skill sets can be used for performing mission-critical tasks rather than dealing with conventional mundane activities. These employees can focus more on fostering a deeper relationship with customers. Customers, on the other hand, will get much faster service since the super lengthy process of filling prescriptions will get automated. Additionally, pharma retailers can also consider focusing on dark stores and micro-fulfillment centers as robots will help automate fulfillment processes and help in fast delivery.

Braintrust
"Walgreens' decision to free up pharmacists to spend more time with customers is a smart and needed move. If robots can help with that then I am all for it."

"We should expect robotics and automation to become the standard operating models for any repeatable tasks."

"Whether Walgreens uses it as a means to reduce the number of pharmacists in-store is still to be seen."